The Orang Utan Republik Foundation (OURF) and actor/environmentalist Ed Begley, Jr., star of ABC's "Bless this Mess," will honor individuals for environmental achievement, activism, news, television, advocacy, and orangutan conservation at the 6th Annual Pongo Environmental Awards to be held on Thursday, June 27, 2019 at the Playa Studios in Culver City, CA. The "Pongo Awards" are a co-production of OURF and The Orangutan Project (TOP).

The evening raises funds for OURF to save wild, critically-endangered orangutans from extinction and is dedicated to honoring individuals, organizations, and projects that have contributed to the improved understanding and appreciation of orangutans, endangered species, rainforest habitat, and for improving conditions for orangutans and other animals.

This year's recipients of the 6th Annual Pongo Environmental Awards include:

Leif Cocks, TOP-president and founder and OURF vice president and a featured keynote speaker this year, will be signing copies of his new book, "Finding Our Humanity," an uncommon journey into what the great apes, our tribal past and a more philosophical approach to life can teach us about our humanity.

The evening gala (7-10:30pm) will also feature surprise celebrity appearances, vegan food by celebrity chef Bruce Kalman, an open bar, musical entertainment by Katey Sagal and the Reluctant Apostles, LA-based Australian band Desert Sparrow, and live and silent auctions with unique and exclusive items. Tickets are limited and can be purchased via Eventbrite at http://theorangutanproject.org/LA 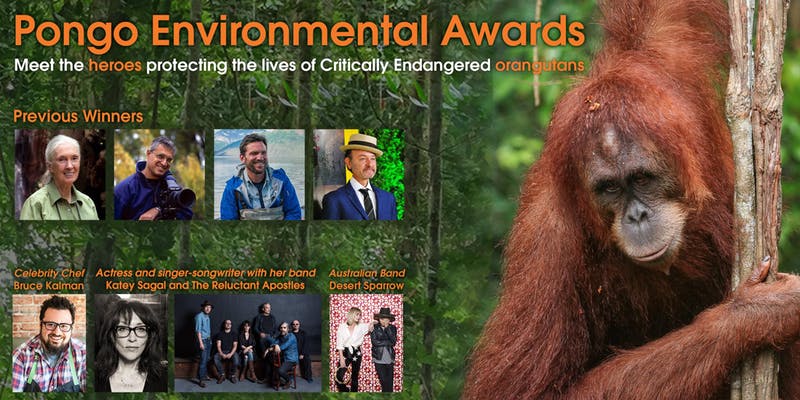 Additional information on the Pongo Awards:https://www.youtube.com/channel/UCjXOe1NpVZiqbx_Eu7BAVmw