- New research suggests taking Bornean orangutans from degraded habitat and moving them to new areas is not good for the animals themselves and negatively affects forest conservation efforts.

- Orangutans have been found to survive in mixed areas of palm oil and forest and even better in selectively logged forests, scientists say.

- But NGOs argue that, in many situations, orangutans need to be moved to avoid conflict with fruit farmers, and risk being shot if they are left in situ.

Dramatic images of orangutans being rescued from clear-cut forests are ubiquitous on the web and in nature magazines, but new research suggests that rather than being a crucial tool for the conservation of the species, removing these great apes from patches of forest in agricultural landscapes in can be harmful to both the animals themselves and the habitats they are taken from.

Researchers found that over a 10-year period, between 2007 and 2017, at least 621 Bornean orangutans (Pongo pygmaeus) — and possibly more than 1,800, given known inconsistencies in reporting data — were “rescued” from forest fragments and human-impacted landscapes in Borneo and moved to new locations.

But the data obtained by the team, and reported in the Journal of Biological Diversity, showed that 90% of the 621 individuals were healthy, and 20% were females with infants. This suggests, the authors say, that there were sufficient resources within even these degraded areas for the orangutans to thrive.

A second paper, due to be published in the Journal for Nature Conservation, reached broadly similar conclusions. 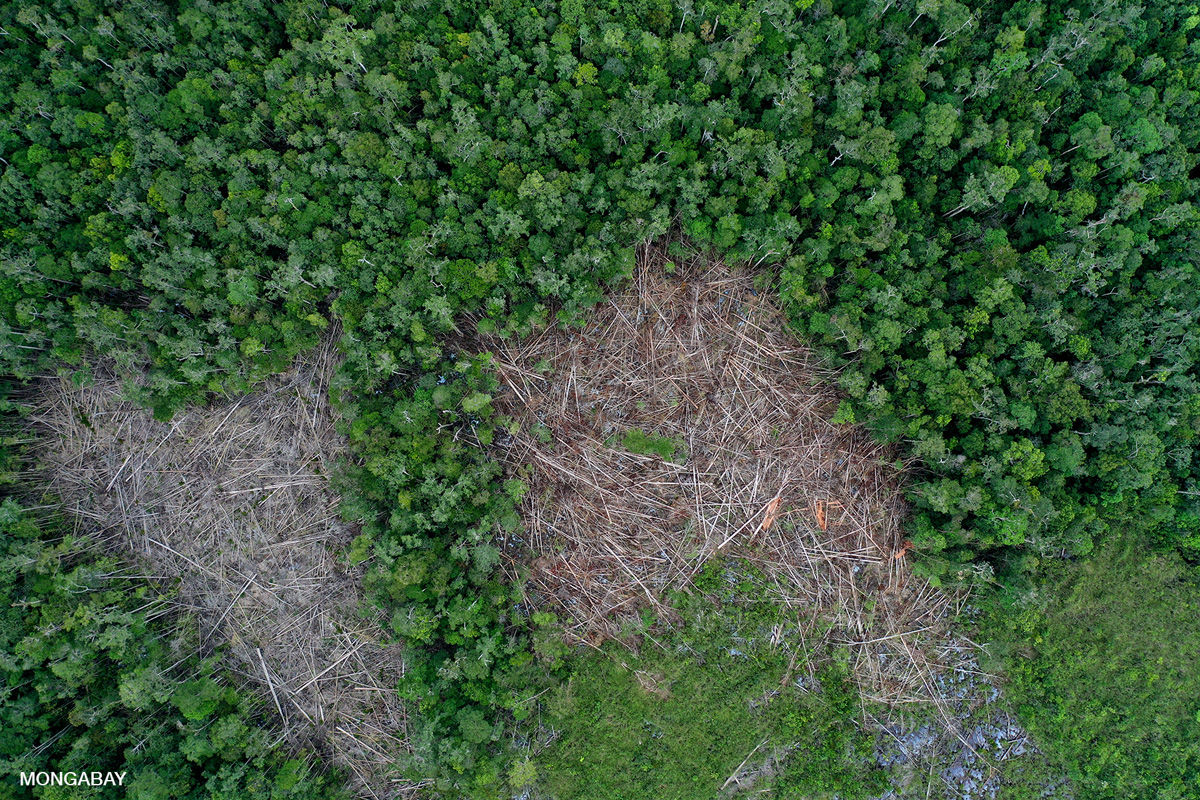 Deforestation in Indonesian Borneo, where large swathes of orangutan habitat have been lost to logging, mining and industrial agriculture. Photo by Rhett A. Butler

Indeed, experts say a previous assumption that orangutans need pristine rainforest in which to live is wrong.

“People thought orangutans were totally arboreal and could only exist in pristine primary forest, but what we’re finding is they are quite capable of moving on the ground between a forest fragment and a larger area,” says Julie Sherman, lead author of both papers.

Furthermore, what we know about how translocated animals fare in their new homes suggests they don’t do well. One 20-year-old study, cited in the second paper, found survival rates may be less than 20%; another from 2009 that they could range from 20-80%.

“Records indicate that some animals die during or shortly after capture, and evidence of long-term survival is lacking,” Sherman says. “Based on knowledge of orangutan behavior, we suspect that many die following their release.”

The effect of moving orangutans out of these forest patches is not confined to the animals themselves — it also damages the habitat they have been taken from.

“When you take away protected animals from a forest fragment, you remove any incentive and the legal reason for the landowner to keep those trees standing,” Sherman says, “and once the forest is cut, everything is lost – all the species that lived in and used it, as well as the ecosystem services such as flood control that it provided to human communities.”

Erik Meijaard, a conservation scientist with extensive experience working in Indonesia and one of Sherman’s co-authors, makes a similar point, saying NGOs have helped the Indonesian government and palm oil companies to pursue their interests by removing orangutans from these forest fragments.

“Companies can come in and cut down the forest because you have rescued the orangutans and removed the problem, then the sun bears, clouded leopards and bearded pigs all disappear too,” he says.

Karmele Sánchez is the program director for International Animal Rescue (IAR) in Indonesian Borneo; moving at-risk orangutans is a major part of what the organization does.

While agreeing with the scientists’ critical point that orangutan conservation requires a renewed focus on habitat protection, she argues that IAR is already heavily involved in tackling this problem through education and raising awareness, but also that the issue is not always as simple as the studies imply.

“We are in the frontline, and we see situations that are not as pretty as they try to picture,” she said. “We deal with a lot of complaints from farmers over crop-raiding, and that’s probably the number two reason why we rescue orangutans, with the number one being forest fires.”

In some situations, Sánchez said, farmers who facing losing crops to the animals will resort to shooting at them with air guns. “They can blind them by targeting the eyes,” she said. “We find orangutans with pellets in their faces too often for it to be a co-incidence.”

In a joint statement following the publication of the studies, two groups working to conserve Sumatran orangutans (Pongo abelii) said the rescue and rehabilitation of individuals was only ever carried out where the forest area where they lived was being cleared or if their lives were in immediate risk.

“We can confidently state that without such interventions, these orangutans would have had little chance of survival, and those that were not starved or shot would likely have ended up in the illegal pet trade,” said the statement, released by the Sumatran Orangutan Society (SOS) and the Orangutan Information Centre (OIC).

But the statement also recognized that translocations do not solve the broader issue of habitat loss and said the two groups would examine the findings of the Borneo-focused research to see if there was anything they could learn from it.

According to Meijaard, there are mechanisms for dealing with crop-raiding orangutans, including financial compensation for affected farmers, and companies need to follow Indonesian laws that require them to protect the animals and their habitat.

“We understand that this is rarely happening, but it is still vital that we work with communities and companies to facilitate the coexistence between orangutans and people rather than remove the orangutans,” Meijaard says.

So why do translocations happen to the extent they do if the science suggests they are not achieving the desired outcome? Sherman says pictures of “emaciated, desperate or injured orangutans, or girls holding adorable babies” work well as tools to raise money, but the issue is also more complicated than that.

“I think of it more in terms of a feedback loop — people are [giving money] out of concern, but then it’s also taken up by the government, by the public and by donors as the solution to orangutan conservation,” she says. “But it doesn’t work.”

Sánchez argues that orangutan translocations are a vital fundraising tool, because talking to “people in the west about the problems of deforestation and lack of habitat” does not produce great results. “When you talk to them about baby orangutans, they give you a lot of money. If we really wanted to give people a good message, that would take a long time, but in the meantime, we need to continue getting funds.”

Meijaard says it’s time for forest and orangutan conservationists to stop basing policies on supposition. “In the 1990s, everyone said that orangutans cannot survive in selectively logged forests, but if we had really looked at the data, we would have realized that they do better in them than in primary rainforests because of the regrowth of pioneer species and the fruit they provide,” he said.

“We never even looked at the data or asked the question, so we missed an opportunity of 20 to 30 years to work with the timber industry and work on conservation solutions together. We missed the boat, and in the same way — though I don’t like palm oil — we are missing an opportunity by just agitating and refusing to accept it’s there. And that’s a problem for conservation.”

Banner Image by Rhett A. Butler/Mongabay.

Article posted by James Fair on 15 April 2020 on Mongabay: