- Indonesia aims to transform its forests into a carbon sink by 2030 by reducing deforestation and increasing reforestation, as the country targets going carbon neutral by 2070.

- Experts say the plan is unrealistic given the current pace of deforestation and the fact that prevailing government policies still allow for a substantial amount of forest clearing for agriculture.

- A surge in global palm oil prices could also drive further deforestation in Indonesia, the world’s top producer of the commodity

JAKARTA — Indonesia has laid out an ambitious plan to tackle deforestation, the main factor contributing to the country being one of the top global greenhouse gas emitters. But experts have panned its goals as unrealistic, given the true state of forest loss in the country

Under the plan recently announced by the Ministry of Environment and Forestry and due to be submitted to the U.N. Framework Convention on Climate Change (UNFCCC) in April, the government proposes three scenarios for emissions reduction, with differing levels of ambition.

The most ambitious scenario calls for more than halving the deforestation rate over the next three decades as well as reforesting 10.6 million hectares (26.2 million acres) of land by 2050.

On this trajectory, the country’s forests are expected to become a net carbon sink by 2030, capable of absorbing 304 million tons of CO2e per year. This will be key in Indonesia’s bid to achieve peak emissions by 2030 and net-zero emissions by 2070.

“These all will require a transformational change in the energy sector as well as the food and land use system,” Emma Rachmawati, the environment ministry’s director of climate change mitigation, said at a recent public consultation of the long-term strategy.

Forestry experts say they aren’t convinced, however, pointing out that the country is already on track to vastly overshoot the most ambitious target.

At this rate, Indonesia can’t afford to lose any more forest from now on, according to Yosi Amelia, the forest and climate program officer at environmental NGO Madani.

Into the ‘danger zone’

The government touts last year’s figure of 115,459 hectares (285,300 acres) of deforestation — the lowest since it began keeping track of forest loss in 1990 — as evidence that it can keep pushing the rate to manageable levels.

But even if the policies that the government credits for that decline are maintained, the country is still on track to lose a further 55 million hectares (135.9 million acres) of forest by 2040, according to Dodik Ridho Nurrochmat, a professor of forest policy at the Bogor Institute of Agriculture (IPB).

Bringing down the deforestation rate to the level that the government envisions in any of its scenarios will be “very difficult based on our calculation,” Dodik said in a recent online discussion. “Even though the trend [of deforestation] is in a decline, the decline will be small and level off later.

“This is approaching an irreversible point,” he added, “which means we have to stop [further deforestation]. If we continue [to deforest more than 55 million hectares], we’ll enter the danger zone.” 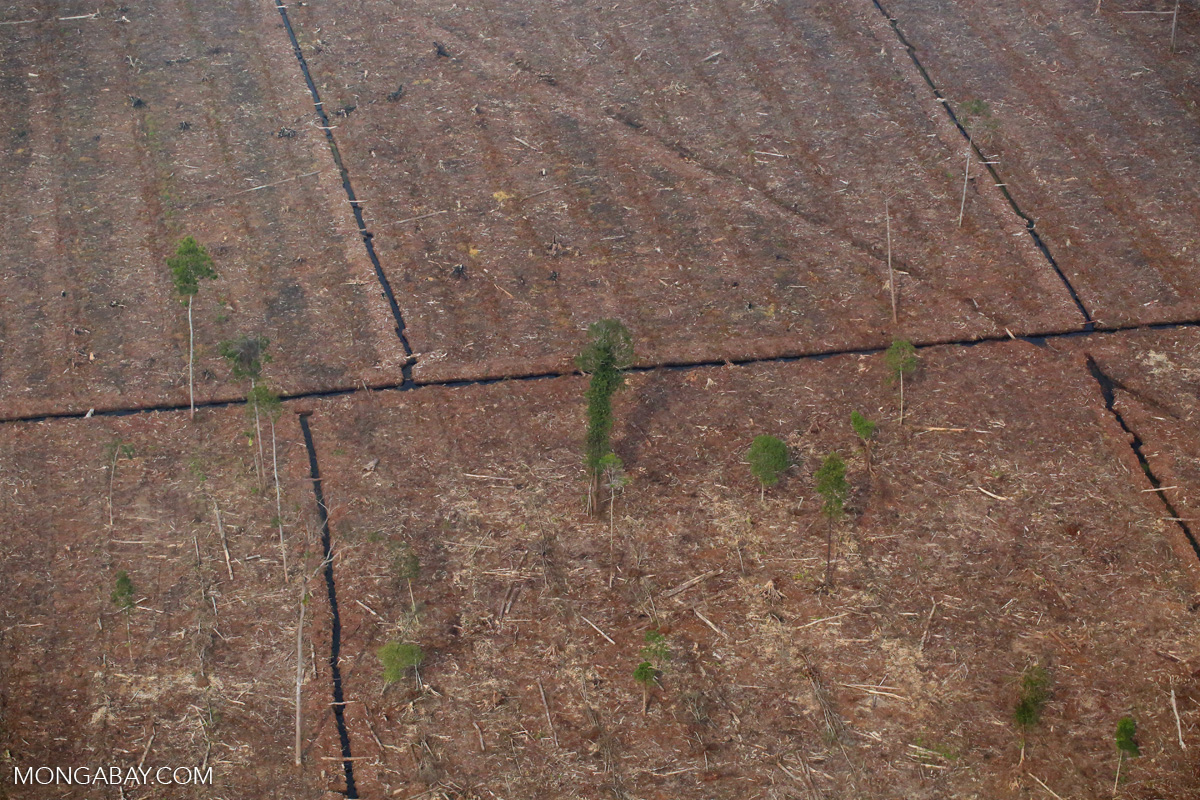 Then there’s the perennial problem of how Indonesia calculates its deforestation rate. Plantations of acacia and eucalyptus that are cultivated to make paper and wood pulp are currently counted as forest — even though massive swaths of peatland and primary forest were cleared to make way for these plantations.

That’s what makes the government’s “record low” deforestation rate in 2020 so misleading: most of the decline came from a drop in harvesting of pulpwood trees, says Yosi from Madani.

Harvesting in these plantations accounted for three-fifths of the total deforestation rate in 2019, but plunged by 99% in 2020. At the same time, actual deforestation of actual natural forests declined by only 38%. Yosi said this might have to do with the cyclical nature of pulpwood plantations, with last year not being a harvesting year.

“That’s why last year’s deforestation rate went down, because there’s no cutting down of industrial plantation trees yet, they’re still at the planting stage,” she told Mongabay. “This is our assumption.”
As a result, the deforestation rate is likely to bounce back up once it’s harvest time for pulpwood producers, effectively undermining any goals that assume a declining deforestation rate. 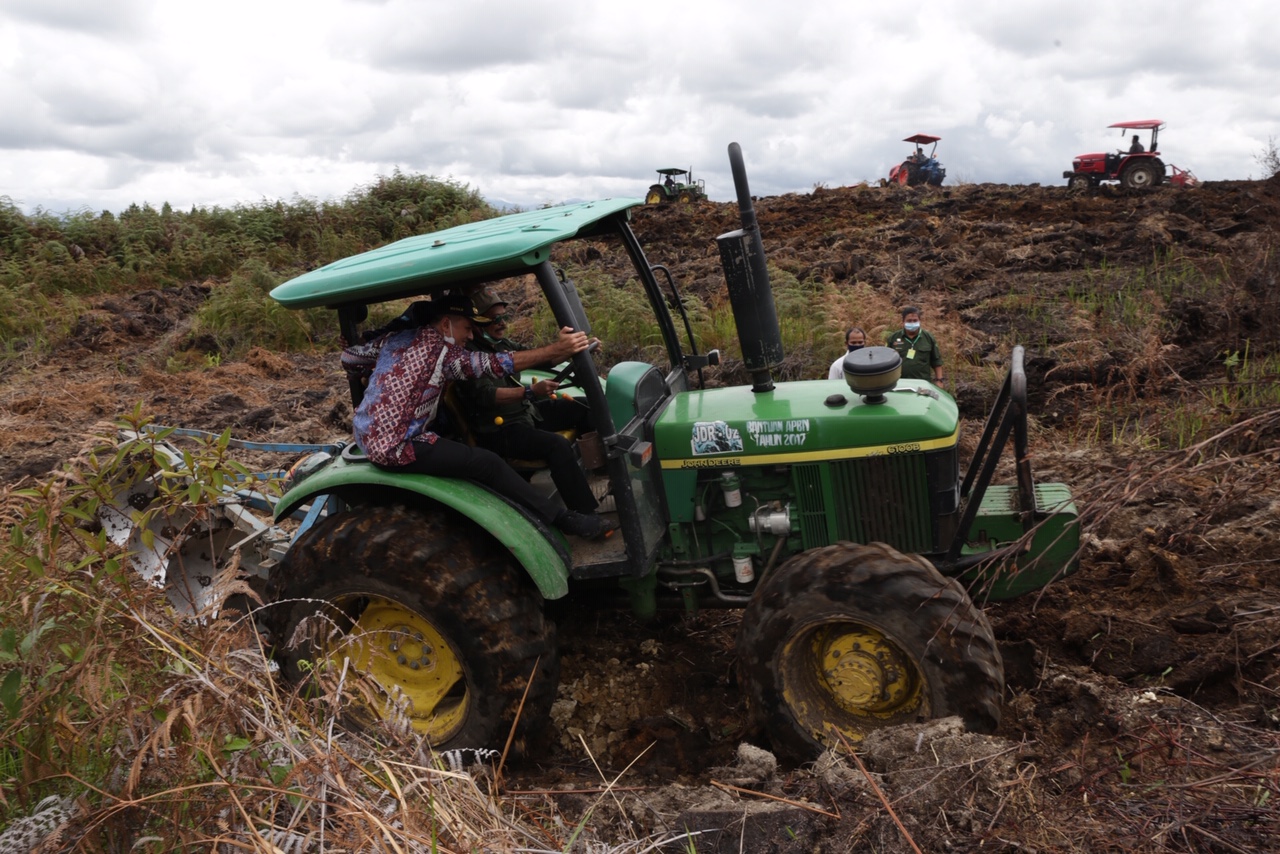 Indonesia is home to the world’s third-largest expanse of tropical forests, after Brazil and the Democratic Republic of Congo. As recently as the 1960s, 80% of the country was rainforest.

Now, only half of the country’s land is forested, due largely to illegal logging and industrial-scale clearing of forests and carbon-rich peatlands for plantations. The result of all this deforestation has been to release huge amounts of carbon initially stored in vegetation and peat soils.

The disappearance of these key ecosystems has also meant the loss of one of the world’s greatest buffers against climate change, given that old-growth forests absorb and store large amounts of carbon already in the atmosphere.

Yet the government insists there must be an allowable level of deforestation for cultivation of food crops. This is primarily to accommodate a plan to establish millions of hectares of large-scale agricultural plantations across the country, also known as the food estate program.

To ensure there’s sufficient land for the program, the Ministry of Environment and Forestry issued a regulation on Oct. 26 permitting protected forest areas to be cleared for that purpose on a “large scale.”

A recent study by Madani shows there are 1.57 million hectares (3.8 million acres) of natural forests located in areas targeted by the government for conversion into farmland.

Nearly nine-tenths of these forests are in the province of Papua, one of the most biodiverse regions on Earth and home to the majority of Indonesia’s remaining tropical rainforest. 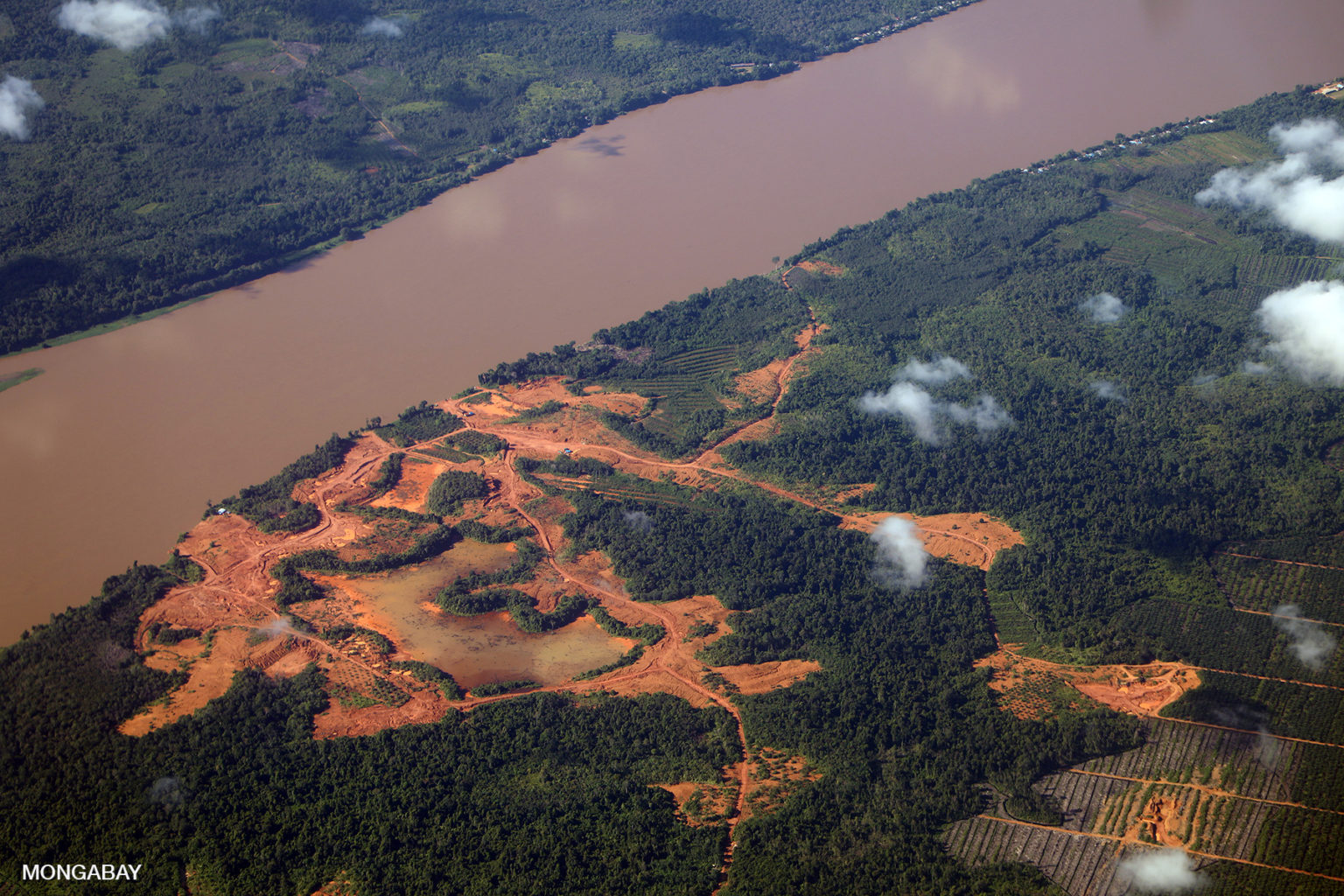 Deforestation for palm oil and mining in West Kalimantan, Indonesia. Image by Rhett A. Butler/Mongabay.

Madani’s Yosi said the plan to reduce emissions from the forestry sector likely hasn’t taken into account policies that increase deforestation risk like the food estate program and a widely criticized slate of deregulation recently passed by parliament.

If these policies are taken into account, then the environment ministry’s ambitious scenario becomes unrealistic, she added.

In March, the price of crude palm oil on the benchmark Bursa Malaysia Derivatives reached an all-time high. This will encourage further deforestation to cultivate oil palms, Hery said.

A recent study, not yet peer-reviewed, found that the rates of plantation expansion and forest loss correlate with palm oil prices, with a price decline of 1% associated with a 1.08% decrease in new plantations and a 0.68% decrease in forest loss.

“If we see the current trend of demand for commodity, it’s increasing now and the pressure on our land will surely be high,” Hery said. “If we look at the prices of commodities now, they’re potentially increasing to be really high.”

With a number of policies and economic factors presenting stumbling blocks to Indonesia’s bid to turn its forests back into a carbon sink, Yosi said the country needs to transform the way it uses its land and forests to develop its economy.

“Our future, as well as the next generation’s, depends on the transformation of Indonesia’s economic development so that it no longer destroys forests and the environment,” she said.

“This transformation has to start right now because the worsening impact of the climate crisis doesn’t give us a luxury of time.”