The evening event will celebrate Indonesian biodiversity while acknowledging individuals, organizations, and media for environmental achievement.

28 May 2021 - Santa Monica, CA.  The Orang Utan Republik Foundation (OURF) will honor individuals for environmental achievement in conservation, education, and environment at the 8th Annual Pongo Environmental Awards to be held on Saturday, November 13, 2021, (postponed from August 28th) in the newly renovated event auditorium of the Indonesian Consulate General in Los Angeles, CA.

The evening raises funds for OURF to save wild critically endangered orangutans from extinction and celebrates individuals, organizations, and projects that have contributed to the improved understanding and appreciation of orangutans, endangered species, rainforest habitat, and for improving conditions for orangutans and other animals.

The Orang Utan Republik Foundation is commemorating its 17th year of educating people about the plight of the orangutan. “Among the abundant biodiversity of Southeast Asia, the three species of critically endangered orangutans are unique in being the only wild great apes found outside of Africa,” says OURF President and Co-Founder Dr. Shapiro. “We are delighted to be receiving the support of the Indonesian Consulate General this year to pay tribute to those who make significant achievements in conservation, particularly in Indonesia, and in our improved ecological understanding, and environmental sustainability.”

Special honors and recipients of the 8th Annual Pongo Environmental Awards this year are still being selected; however, previous Pongo Award recipients have included Dr. Jane Goodall; Leonardo DiCaprio Foundation; James Cameron, David Gelber, and Joel Bach for the pioneering Showtime series “Years of Living Dangerously” promoting climate change awareness; Professor Michael Mann, one of the most important climate advocates of our time; the producers of “The Dawn of the Planet of the Apes” for the film’s dramatic portrayal of an evolving population of great apes using CGI, actor Mike Farrell and playwright George Shea for “Dr. Keeling’s Curve,” the KCET television special about Dr. David Keeling, the scientist known worldwide for his work documenting global warming, and GoPro Creative Director Bradford Schmidt for his film, “Our Orangutan Brethren,” among others.

OURF continues to move forward to advance its conservation education mission. OURF will be awarding its 200th Orangutan Caring Scholarship this year to students in North Sumatra, Aceh, Central Kalimantan, West Kalimantan and East Kalimantan (Indonesian Borneo). OURF currently is administering the Community Education and Conservation Program (CECP) in and around Gunung Leuser National Park in North Sumatra protecting the ecosystem and improving the livelihoods of villagers along the border of the Park. OURF also serves as a chapter of the internationally renowned The Orangutan Project in the United States.

Orangutans are only found in the wild on the islands of Borneo and Sumatra in the countries of Indonesia and Malaysia (N. Borneo). Fewer than 14,600 individuals remain on Sumatra. Their population continues to decline due to the conversion of forest to agriculture, the illegal pet trade, being killed as pests or hunted, as well as habitat degradation from natural and human-caused activities, i.e., fires, mining, logging, palm oil, and major infrastructure projects.

Tickets to attend the gala event can be purchased at https://secure.givelively.org/event/orang-utan-republik-foundation-inc/8th-annual-pongo-awards.

Additional information about OURF and the Pongo Environmental Awards are at www.orangutanrepublik.org.

A note about Covid safety & the change in the date of the event: Covid-19 cases have risen in recent weeks prompting a County-wide "Mask Mandate" and causing OURF to reschedule the event until November 13, 2021. The health and safety of our guests and supporters are paramount.

About Orang Utan Republik Foundation (OURF) OURF is a 501(c)(3) publicly supported charity with a mission to save wild orangutans through education initiatives and innovative collaborative projects. OURF partners with Indonesian organizations and communities to promote outreach education and sustainable solutions to long-term conservation of the orangutan and its rainforest habitat. Culturally sensitive and effective education programs to foster community-based conservation actions are developed and implemented to save the forest habitat and the species. For more information about OURF visit (www.orangutanrepublik.org)  OURF is also serves as the US chapter of The Orangutan Project expanding its reach and support to over a dozen orangutan support organizations in Indonesia and Malaysia (www.theorangutanproject.org) 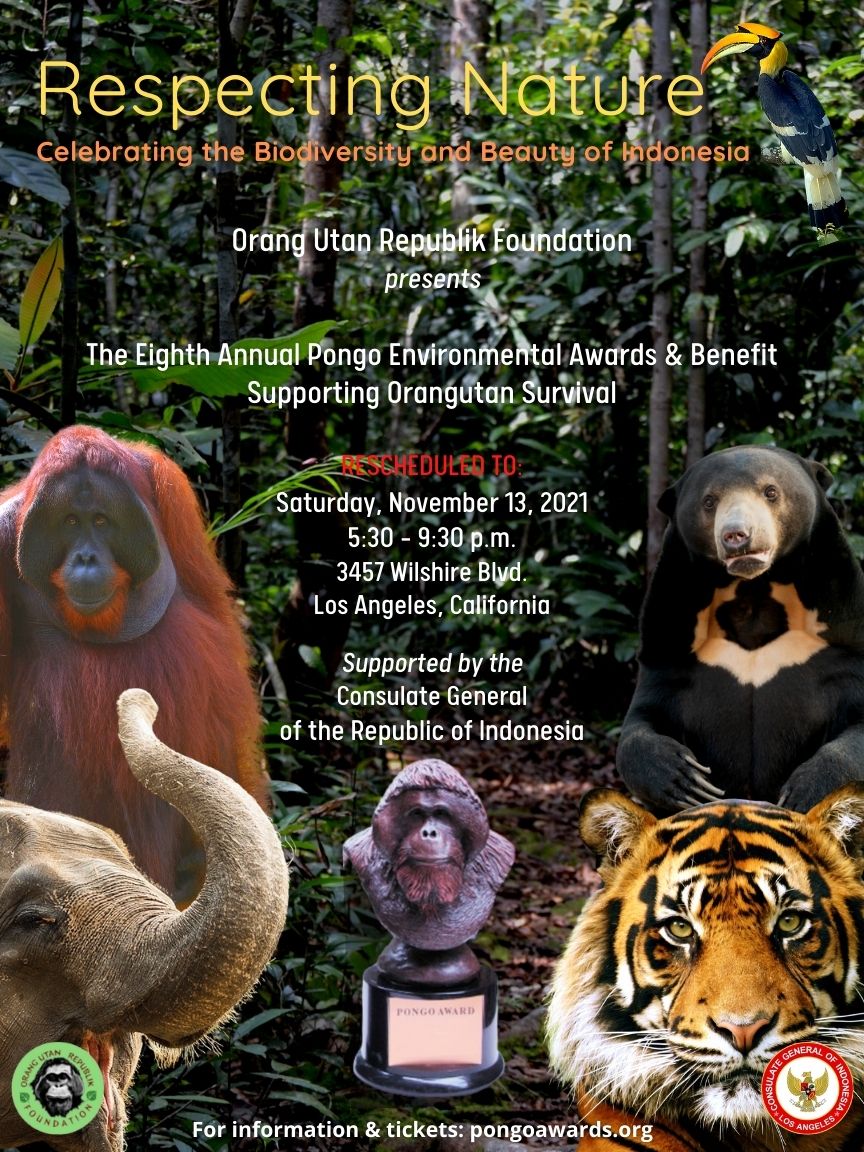