By Becky Keller, Orangutan Coach.  Orangutan mothers are patiently tireless. As a mother, myself, I hold them in high regard. Have you ever watched a video (or an actual orangutan at the zoo or in the wild) of a mother orangutan with her baby and noticed how the baby not only clings to the mother’s hair but also seems to want whatever the mother is putting into her mouth? The baby is learning. If the mother is eating it, it must be good, so the baby wants some too. And so, begins the education of the baby – which may continue for 6 or 7 years as the baby grows into a juvenile and learns to navigate the rain forest on their own, independent of the mother who was his/her primary educator. There is much for that baby orangutan to learn. There is much for the mother to teach. All of that happens in different ways, in different places.

Coming back from Borneo after my first visit, I was excited and full of newfound information I wanted to share…with anyone who would listen. I had stories to tell. I found children to be eager listeners at that time. Sitting still, however, was sometimes a challenge. They were wiggly. They wanted to feel, see, and “do” the information as much as I had when traipsing through the rainforest in search of orangutans. Eager minds and questioning voices made it necessary for me to create different ways to pass on the information I now had to the exploring eyes that met mine when I started to talk. They were a little scary with all their “wanting to know everything” questions. Until I realized I did not need to know everything – right then. I just needed to stay ahead of what they knew at the time. The baby orangutan did not learn to eat everything its mother ate all at once. He learned to eat a little at each meal. I could manage that idea.

When my daughter had to do a book report assignment which included making a book diorama illustration with the “book report” – she chose to do it on orangutans. I helped her choose a book and we talked about orangutans in Borneo. I showed her photographs and explained some of the things I had seen while in Borneo. She asked me questions, then got to work. She chose her supplies and planned for her “box”. She took the book and the diorama to her classroom and presented it to her classmates. Her teacher was pleased, her friends were happy, and she had fun making the project. I was proud of her.

Another younger daughter wanted an orangutan to come to her classroom. We talked about where orangutans lived and the rainforest habitat they needed. The compromise included a human, dressed like an orangutan coming to her classroom for an interesting outdoor experience building orangutan night nests. Luckily, the City park adjacent to the elementary school had freshly cut landscaping tree branches they were willing to leave out for a few days so the school children could practice making their own “nests”.

My daughter and her classmates divided into three teams, eagerly diving into the landscaping debris to select the absolute best branches they thought the resident orangutan (now pondering over which nest he was going to choose) would like the most. The children scrambled to pile up the branches in nest-like fashion with the “orangutan” and I meandering among the contenders. The orangutan gestured and grunted his pleasure and I offered pointers to the children as to what may make a comfortable or suitable nest for the orangutan. We talked about the size of the nest, the smells, fruit, insects that the orangutan may need for food before he drifted off for his night’s rest. The orangutan sat down on some of the nests trying them out for size and comfort. The children laughed and tried to get the orangutan to choose their nest. The parents and teachers there to oversee the outdoor learning environment loved the energetic participation of everyone enjoying the activity. The Landscapers who generously contributed the greenery watched silently on the side in amazement that everyone was finding so much use with what they just considered debris. I had previously explained why I needed their assistance and the purpose of my request for what they considered their waste material, but I am not sure they understood until they watched the children so involved with all the leaves and branches. The children had fun and learned about orangutans. 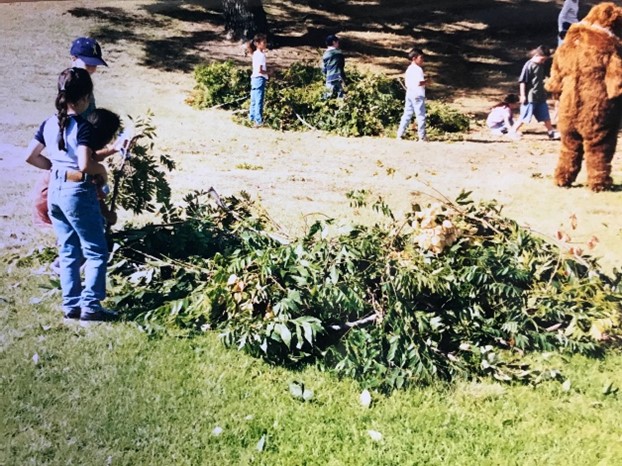 Education happens in many ways. Some by intention, some by accident, some by role-modeling, some in formal school, some from informal school. Education is inevitable and sometimes even unintentional.  As someone involved and as someone who cares about orangutans, I encourage others to listen…to yourself and to others to better know how you can fit into a part of what is needed and be as effective as possible with your own talents, skills, and gifts. Every attempt or act of education is important.  Your example and/or actions may be as much of an education sometimes that anyone can take in at the moment.  If so, then you are a success.

Here is a link to a recent article on orangutan education and how researchers have recently discovered some types of learning take place in the wild. Interesting food for thought as to how orangutans learn and what it may reflect on human learning as well. Young orangutans have sex-specific role models -- ScienceDaily