- Palm oil giant Royal Golden Eagle (RGE) has allegedly sourced the commodity from a plantation responsible for deforesting prime orangutan habitat in Sumatra, which would constitute a violation of the group’s no deforestation and no peatland destruction policies.

- An investigation by the Rainforest Action Network (RAN) detected deforestation within the plantation operator’s concession in Indonesia’s Leuser Ecosystem, home to some of the rarest species on Earth.
According to the investigation, palm oil from the concession ended up in RGE’s supply chain, and subsequently the global market; RGE is a key supplier to major brands like Unilever, Kao, Procter & Gamble, PepsiCo, Mondelēz, Nestlé and Colgate-Palmolive.
- RGE’s palm oil arm, APICAL, said it had put a monitoring system in place and carried out risk engagement and supplier engagement measures in its supply chain, but RAN said these efforts were not enough as deforestation-tainted palm oil from the Leuser Ecosystem was still ending up in its supply chain.

JAKARTA — A major palm oil company supplying to global brands like Nestlé and PepsiCo continues to source the raw commodity from plantations responsible for deforesting prime orangutan habitat in Sumatra, according to a recent investigation.

RGE is owned by one of Indonesia’s wealthiest tycoons, Sukanto Tanoto.

The plantation in question, PT Laot Bangko, allegedly cleared rainforests in Sumatra’s Aceh province, with satellite imagery showing clearing taking place in early 2021. A total of 7 hectares (17 acres) of forests were cleared since January, half in May alone, according to RAN.

“There was no clearing from February to April but clearing resumed again in May which is worrying given the importance of the lowland rainforests inside and surrounding its concession,” Gemma Tillack, policy director with RAN, told Mongabay. 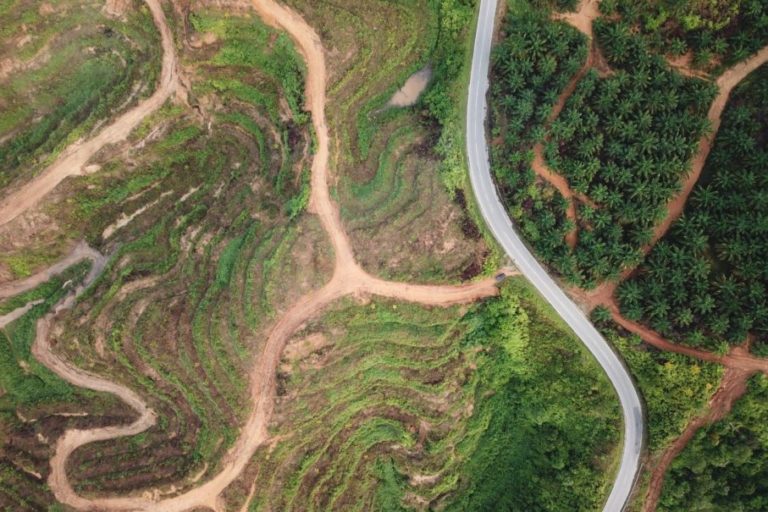 These rainforests are the last habitat for critically endangered Sumatran orangutans and elephants in the Leuser Ecosystem, RAN said.

Deforestation within Laot Bangko’s concession has been well documented by RAN in recent years, with forest cover within the company’s area shrinking from 237 to 117 hectares (586 to 289 acres) between June 2016 and April 2021.

“The fact is that the PT SDS refinery has been sourcing from PT GSS for over a year and our field team found that sourcing continued at least up to April 2021 despite reports of the mill’s non-compliance with no-deforestation policies during this period,” Tillack said.

This isn’t the first time RGE has been linked to deforestation-associated palm oil from Leuser. A similar investigation by RAN last year found that RGE’s APICAL sourced from another producer, PT Tualang Raya, and mill in northeast Leuser Ecosystem called PT Syaukath Sejahtera, that have also been linked to the destruction of the ecosystem.

According to RAN’s report in September 2020, more than 269 hectares (665 acres) of forests were cleared inside Tualang Raya’s concession since the government declared a moratorium on forest clearing for palm oil in January 2018.

RAN alerted RGE to this, and APICAL responded by securing a no-buy position on Tualang Raya and an agreement on a time-bound action plan, including requiring mill operator Syaukath Sejahtera to submit traceability information for its supply chain. This was ostensibly meant to allow APICAL to conduct a risk assessment to identify if any of its suppliers are operating illegally or have committed deforestation in the Leuser Ecosystem.

However, Tillack said RGE’s response was inadequate because it focused on engagement only with mill operator PT Syaukath Sejahtera.

“RAN has been raising to RGE and APICAL that it is exposed to deforestation in the Leuser Ecosystem via a number of mills it sources from that lack adequate traceability and compliance systems, not just PT Syaukath Sejahtera,” she said. “Yet its response following our September 2020 was to take action only via engagement with PT Syaukath Sejahtera.”

Tillack said RGE should have engaged with all mills that were sourcing from non-compliant producers known to be destroying the Leuser Ecosystem as they had been alerted by RAN of the high risk of sourcing from GSS and Laot Bangko, which have also been flagged by the campaign group in the past.

“RGE/APICAL’s response was inadequate as the company has failed to engage with all the high-risk mills it sources from that are at known risk of sourcing from the producers actively clearing forests in the Leuser Ecosystem — including PT GSS,” she said. 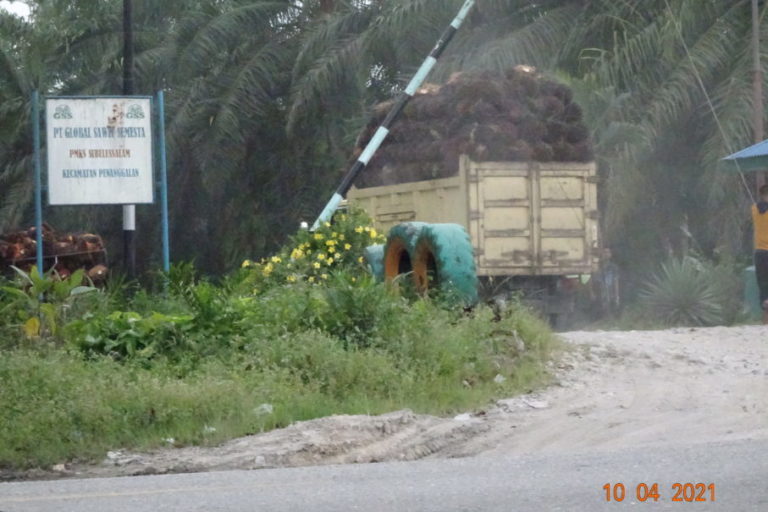 The truck carrying oil palm fresh fruit bunches arrives at the PT. Global Sawit Semesta Crude Palm Oil mill––despite the mill claiming to have a ‘No-Buy policy’ in effect that means it will not buy from PT. Laot Bangko and other producers that have cleared rainforests in the Leuser Ecosystem. Image courtesy of Rainforest Action Network.

“Although we have never sourced directly from PT Laot Bangko, we have engaged with PT GSS and instruct stop land clearing for their supplier, PT Laot Bangko, which include an action plan to correct and/or remediate any non-compliance,” he told Mongabay.

Since then, Laot Bangko has committed to an action plan that includes a commitment to stop clearing with immediate effect and implement a “no deforestation, no peatland, no exploitation” policy, or NDPE.

“We will monitor the case and continue to hold on sourcing from any grievance suppliers until significant progress has been made or grievance resolved,” Yong said.

Tillack said this response confirmed that APICAL sources palm oil from GSS, which is being supplied with deforestation-tainted palm oil from Laot Bangko.

In response to RAN’s criticism of the lack of adequate traceability and compliance systems in RGE’s supply chain, Yong said APICAL had committed to responsible sourcing and had carried out risk assessments of all suppliers in the company’s supply chain.

“We have engaged with suppliers and carried out field visits in 2018/19 to all suppliers in Aceh, and demand full traceability of their sources,” he said.

To complement the field visits, APICAL also has a monitoring system in place which adopts the Global Forest Watch (GFW) Pro and Global Land Analysis Discovery (GLAD) deforestation alerts for risk assessment and monitoring within its supply chain, Yong added.

APICAL has also worked with research consultancy Earth Equalizer to identify and address any deforestation risk in its supply chain in a proactive manner, he said. 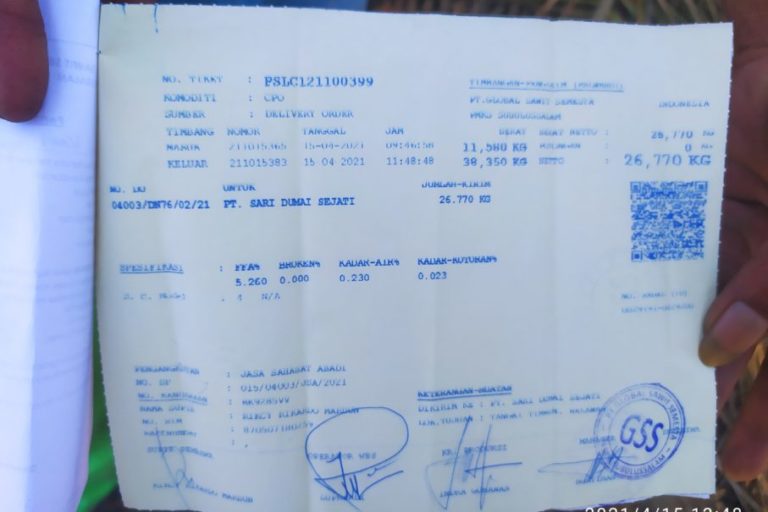 This investigation uncovered evidence that the mill caught sourcing from PT. Laot Bangko is a supplier to PT. Sari Dumai Sejati Tangki Timbun—a palm oil refinery operated by a subsidiary of APICAL—one of the palm oil arms of the Royal Golden Eagle Group. Image courtesy of Rainforest Action Network.

“Our investigations prove that these efforts have not addressed the RGE group’s role in the ongoing destruction of the Leuser Ecosystem,” Tillack said.

RAN has called on RGE’s trade partners and financiers to stop doing business with the group. It says a failure to act constitutes a violation of the brands’ and financiers’ own NDPE policies.

“As global consumers increasingly demand that banks and brands cut forest destruction out of their supply chains or financial portfolios, RGE Group’s failure to comply with basic policies against deforestation and peatland development poses a major liability to companies that continue to do business with this controversial company,” said Maggie Martin, a senior forest campaigner at RAN.