Oil palms alone can be damaging; with other crops, the benefits abound

- The approach has been adopted by smallholders, but large companies are still reluctant to implement it.

- Integrating livestock like cattle with oil palm plantations also produces a number of benefits, such as reducing the need for fertilizers and herbicides

JAKARTA — Intercropping, the practice of growing two or more crops in close proximity, could be one of the keys to mitigating the impact of oil palm plantations on forests and biodiversity, new research suggests.

The common views shared by oil palm farmers and companies is that the crop needs to be cultivated as a monoculture — row upon row of nothing but oil palms — in order to maximize yields. This is due to the belief that other species growing among the oil palms will compete for light and nutrients.

But there’s actually no negative effect on oil palm yield from intercropping or livestock integration, according to Maja Slingerland from Wageningen University & Research, the Netherlands, who researches palm oil and cocoa production from agronomic and socioeconomic perspectives.

Slingerland co-authored a recent research paper published by Tropenbos International, a Dutch consultancy focused on sustainable forestry, that looked at smallholder oil palm plantations in Uganda. It found no negative effects on the growth of oil palms or intercrops in the first four to five years of life of the plantations.

Many smallholders in Indonesia and Malaysia, which together produce nearly 90% of the world’s palm oil, have adopted intercropping in young oil palm plantations. In Indonesia’s Central Kalimantan province, farmers grow banana and cassava in between oil palm trees on mineral soils; in Johor state, Malaysia, farmers plant pineapple on peat soils.

A more formalized system of intercropping was developed by the Malaysian Palm Oil Board in 2009, called the double-row avenue system. It sees the same number of trees planted per hectare (138) as in the conventional planting configuration, but closer together in double rows. This leaves wide “avenues” for growing other crops between the double rows.

For farmers, this allows the cultivation of various combinations of high-value crops, such as cacao, coffee, vanilla, fruit, or timber trees, with minimum negative impacts on oil palm yields. It also allows for a wider choice of crops that can receive adequate light, water and nutrients.

Growing multiple kinds of annual and perennial crops together in a system mimicking a forest like this is called agroforestry, an agricultural technique found all over the world, with well-known examples like shade-grown coffee.

This in turn can improve the livelihoods of the farmers, as they become less dependent on a single crop, in this case oil palm, and less prone to the fluctuating price of the commodity.

Besides that, intercropping also saves land, because when alternative cash crops like pineapples can be planted between oil palm trees, forests surrounding the plantations don’t need to be cleared.

Agricultural land expansion often drives deforestation and forest degradation. In Indonesia, the world’s biggest producer of palm oil, the vast expansion of oil palm and other monoculture crops has contributed to massive deforestation in recent decades.

“This saving of land should be rewarded because it doesn’t need to be deforested,” Slingerland said. “This is a missing link in all the certification systems.” 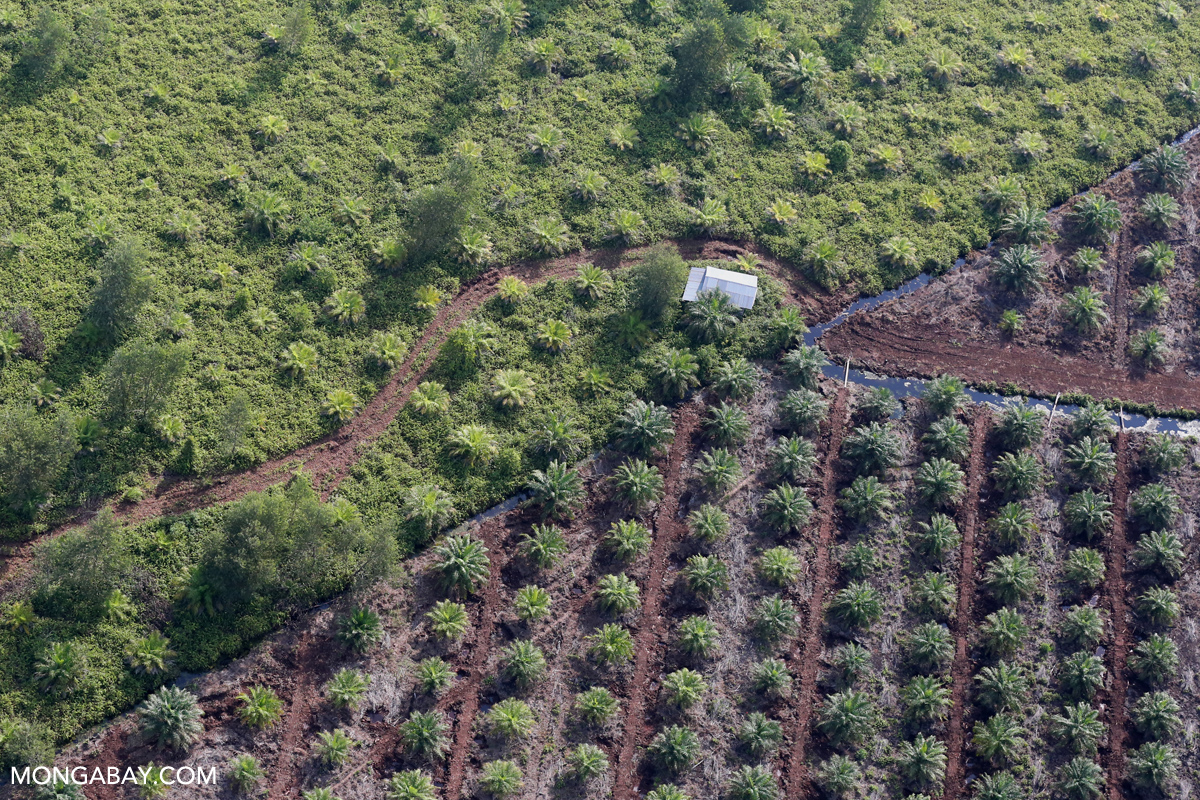 Bring on the cattle

Intercropping also reduces the need for fertilizers and herbicides when livestock, such as cattle, are integrated into the plantations, Slingerland said.

Keeping animals under intercropped systems with multiple perennial and/or annual crops is a form of agroforestry called silvopasture, which often also includes goats, ducks and chickens.

When integrating cattle in a plantation, they graze in the plantation, within a designated plot based on grass availability. Every day, the cattle are rotated to other parts of the plantation. In the process, they eat the weeds that sprout among the oil palm trees.

“They save herbicide because the cattle acts as a weeding mechanism, and they save fertilizers because cattle leaves urine and feces,” Slingerland said.

Oil palm plantation growers can save 25-50% of weeding costs and increase the production of fresh palm fruit yield by 16.7% under such a system, research has shown.

Silvopasture has also been found to mitigate forest fires in Spain, with sheep and cattle grazing the brush that often ignites during dry times.

“Livestock reduces the risk of forest fires, eliminating [the] biomass of bushes and lichens from the ground,” said María Rosa Mosquera-Losada, president of the European Agroforestry Federation (EURAF), who’s in charge of the Department of Crop Production at the University of Santiago de Compostela (USC).

Other environmental benefits of intercropping that have been identified are the increase of carbon stock, the improvement of erosion control, and the decrease of nitrogen leaching.

With many benefits offered by the intercropping system, Slingerland said there’s no reason for the palm oil industry to not be creative in integrating other crops within oil palm plantations.

“All these seas of oil palm trees are not necessary,” she said. “Why not be creative? We should think of overlapping land use, and we do the same in EU. Because that will save a lot of land and greenhouse gas emissions and biodiversity.” 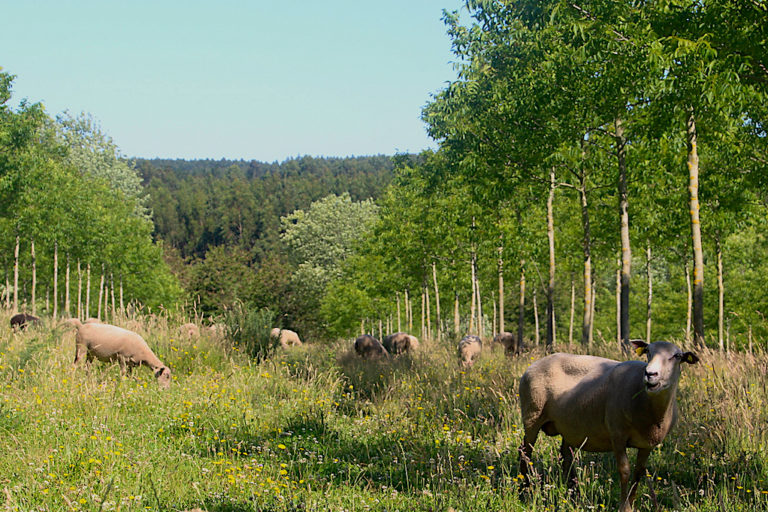 The agroforestry system at Bosques Naturales in Galicia, Spain, is composed of alley-cropped walnut trees, bushes, and sheep that keep the undergrowth trimmed. Image by Monica Pelliccia for Mongabay.

Research carried out at 18 demonstration sites of oil palm agroforestry in Brazil, which included the planting of native hardwoods like ipê and andiroba, and exotics like mahogany, found that the oil palm plantations actually had higher yields.

Known as the SAF Dendê project, the research is supported by various organizations, including World Agroforestry (known also by its acronym ICRAF).

“With a smaller number of palm plants per hectare than conventional forms of cultivation, the SAF Dendê project reached higher yields as compared to monoculture systems: 180 kg of fresh fruit bunches per plant, compared with 139 kg in monocrops of oil palm,” Andrew Miccolis, country coordinator for ICRAF, said. “The oil yield from the palm fruit in this system was also substantially higher than in monoculture, based on direct measurement of the fruits.”

Miccolis said this positive contribution to biodiversity and ecosystem functions can be seen in the SAF Dendê project.

“Field workers and researchers have spotted a wide variety of native fauna in the oil palm agroforests, including deer, monkeys, sloths, porcupines, tapirs, and many types of birds, reptiles, and insects, which indicates ecologically balanced systems,” he said. “Soil samples have also shown very rich soil properties and a very high potential for sequestering carbon, well above conventional monocrop systems, and akin to secondary forests.”

Despite the benefits of intercropping that have been identified, its practice in the palm oil industry is still limited.

Rusman Heriawan, an adviser for the National Action Plan for Sustainable Palm Oil Forum in Indonesia, said few palm oil companies integrate cattle ranching into their plantations, even though the model was introduced 10 years ago.

Slingerland said one of the reasons why large companies are still reluctant to adopt intercropping is because they will need additional workers to attend to the intercrops.