Indonesia’s Leuser Ecosystem experienced a decline in deforestation in 2021, after an increase in forest loss in 2020 linked to the COVID-19 pandemic, according to a satellite analysis by local forest watchdog HAkA.

- Conservationists attribute the decline to an increase in monitoring efforts as well as greater scrutiny of palm oil producers operating in the landscape, by brands and buyers with zero-deforestation commitments.

- Despite the drop in deforestation, experts warn against complacency, noting that forest clearing is still taking place inside oil palm concessions, and areas of primary forest are still zoned for production, which means they can still be legally cleared.

JAKARTA — Deforestation inside Indonesia’s Leuser Ecosystem, home to some of the rarest species on Earth, declined in 2021 to its lowest level in seven years, following a surge in 2020 when the COVID-19 pandemic began.

Leuser is known for being the last place on Earth where critically endangered Sumatran rhinos, tigers, elephants and orangutans coexist. It spans the northern half of Sumatra, covering nearly 2.3 million hectares (5.7 million acres) within the provinces of Aceh and North Sumatra.

Satellite monitoring from local NGO Forest, Nature and Environment of Aceh (HAkA) shows that 4,472 hectares (11,051 acres) of forests were lost in 2021 as of November, an area the size of 90,000 basketball courts. 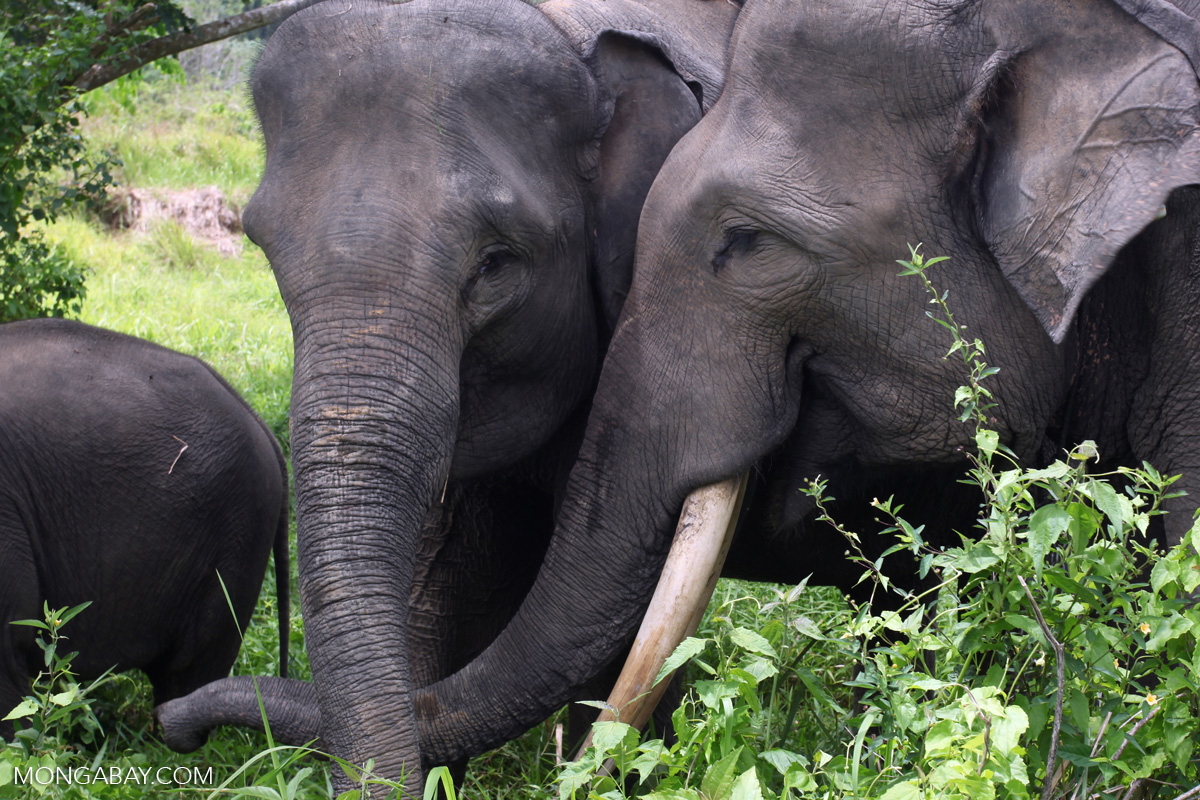 Sumatran elephants. The forests of the Leuser Ecosystem are among the most valuable remaining habitats for this critically endangered species. Image by Rhett A. Butler/Mongabay.

Rudi Putra, a conservationist at the NGO Leuser Conservation Forum (FKL), said this finding from the satellite analysis is in line with what he found from field observations.

“We no longer found large-scale forest clearing within the Leuser Ecosystem,” he told Mongabay. “In the past, there were still many companies that were actively clearing forests. Nowadays, the deforestation is mostly small scale, less than 5 hectares [12 acres].”

Rudi, who has worked on conservation in the Leuser Ecosystem for 20 years, attributed the decline in deforestation to an increase in patrolling and monitoring efforts in 2021.

In 2020, monitoring was limited due to mobility restrictions brought on by the COVID-19 pandemic, which made it difficult for the government and civil society groups to deploy people to the field to monitor and patrol for any illegal activity. The surge was also driven in part by people returning to their villages after losing their jobs in urban areas, Rudi added.

“And then they tried to make an alternative livelihood by clearing forests,” he said. “By the end of 2020, things started to go back to normal. So the monitoring team is already working as usual, even more so than usual by covering larger areas. So there’s been an increase in protection efforts as well. This is quite significant in curbing deforestation.” 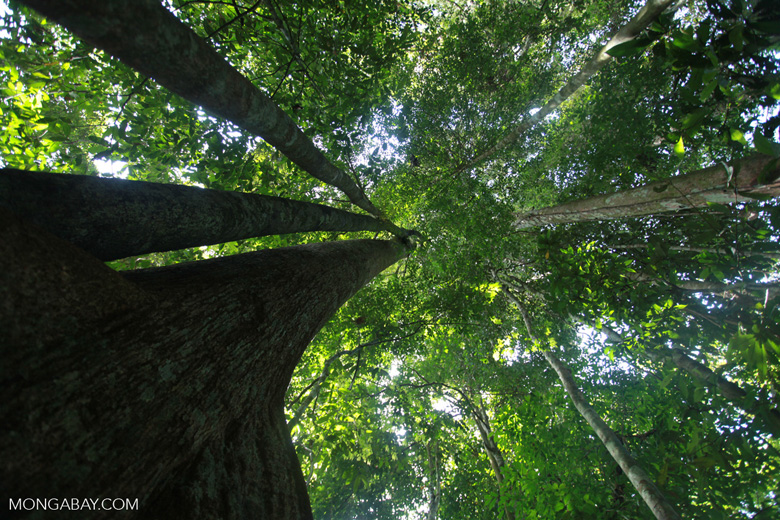 Rainforest canopy in Mount Leuser National Park. Satellite monitoring indicates that in 2021, deforestation in the Leuser Ecosystem declined to the lowest level in seven years. Image by Rhett A. Butler/Mongabay.

Another factor that may have contributed to a decline in deforestation in 2021 is the increased scrutiny on palm oil companies by the global market, according to Rudi.

“Companies are now being very cautious and afraid of clearing lands, because we know that the monitoring system implemented by buyers is in operation, such as PepsiCo, Unilever and Mars, which have adopted policies to not purchase palm oil from deforesting plantations,” he said.

The U.S.-based Rainforest Action Network (RAN), in its year-end review on Leuser, also noted this trend. The campaign group said it found an increasing number of palm oil producers previously implicated in forest destruction had stopped land clearing and issued new commitments to comply with the no-deforestation policies of major brands and traders.

Nevertheless, deforestation still occurred within a number of oil palm concessions, RAN said. At least 312 hectares (771 acres) of forests, an area the size of 10,000 tennis courts, were cleared inside the concessions of the eight companies with the highest deforestation rates between January and October 2021, RAN said.

This ongoing deforestation is putting further pressure on the Leuser Ecosystem, threatening a landscape that’s already teetering on the brink of maintaining viable habitat for critically endangered species found nowhere else on Earth, RAN said.

The Leuser Ecosystem also plays an important role in the global fight against climate change, housing one of Indonesia’s last large tracts of intact, carbon-absorbing rainforest.

RAN said the destruction of the forest “has potentially catastrophic consequences for all of us as the climate crisis continues to accelerate.” 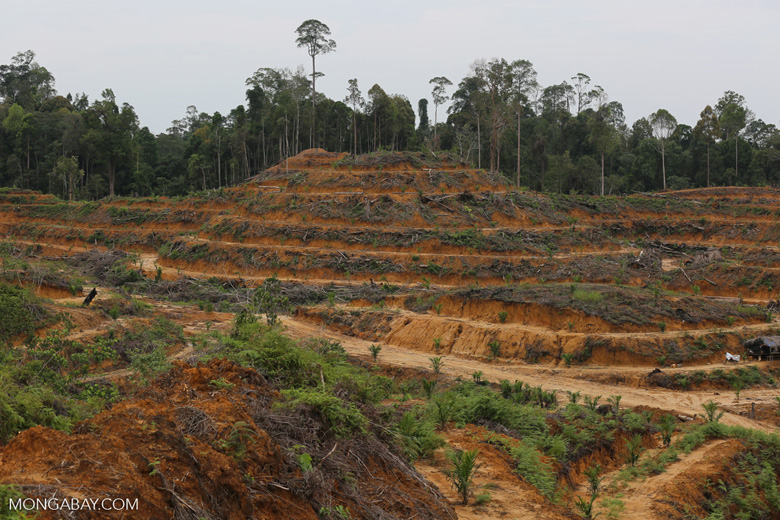 Elephant, orangutan, and tiger habitat cleared in the Leuser Ecosystem for oil palm. Image by Rhett A. Butler/Mongabay.

Rudi said there’s been increasing awareness and recognition of the Leuser Ecosystem’s role in mitigating climate change, especially outside Indonesia.

“The international awareness is higher at the global level, even more so than in Indonesia,” he said.

RAN called 2021 “a year of major advances in efforts to protect the Leuser Ecosystem” due to a number of initiatives taken by global brands and the government.

For instance, in 2021 Nestlé and Unilever published their “forest footprints” for Aceh, an accounting of the total area of forests and peatlands and the rights of Indigenous and local communities that remain at risk.

The project aims to spare HCV areas and HCS forests from future deforestation. It also aims to try new ways to identify customary forests to ensure legal recognition and respect for the customary rights of local communities.

The project is targeted to be finalized around the third quarter of 2022. 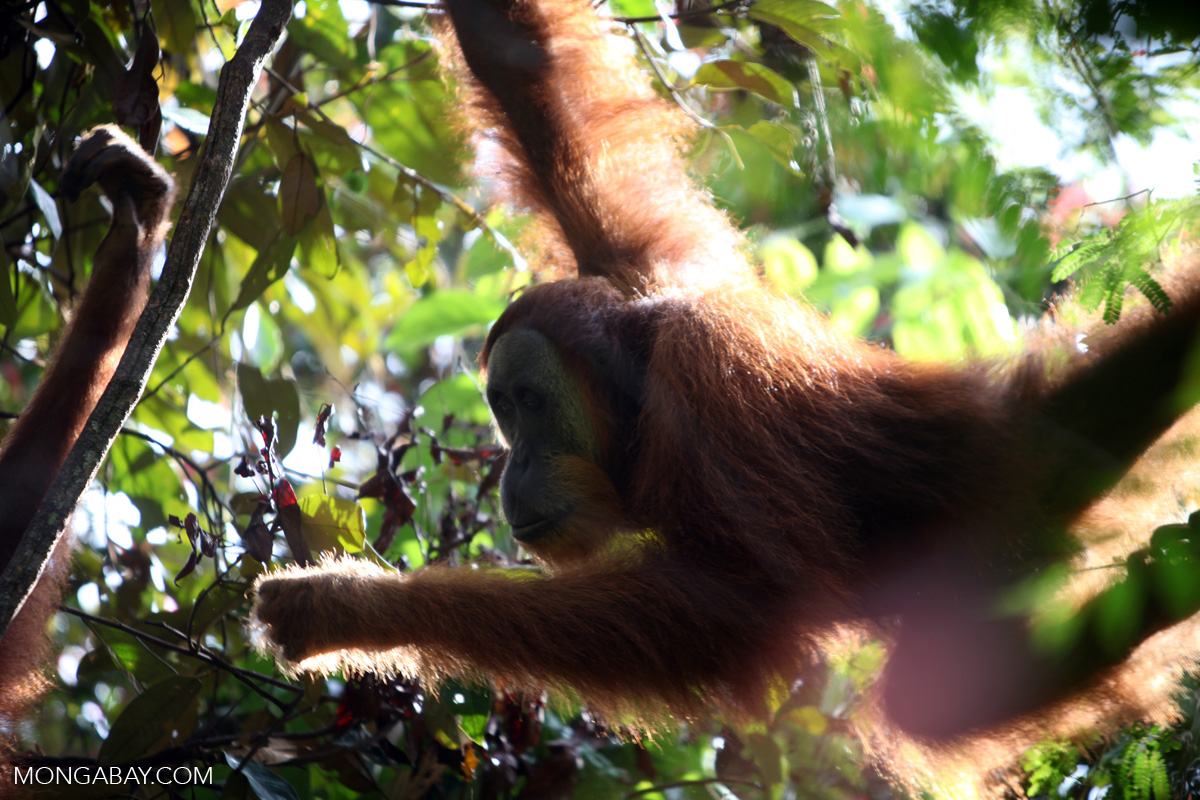 On orangutan swings through the trees in Mount Leuser National Park. Image by Rhett A. Butler/Mongabay.

Leo Bottrill, CEO and founder of MapHubs, who runs a web-based monitoring platform called Palmoil.io that traces palm oil supply chains, said he would caution attributing too much credit for the decline in Leuser’s deforestation to zero-deforestation policies adopted by producers, traders and brands.

“While major traders have improved their monitoring of supplier concessions, their responses to deforestation cases remain uneven,” he told Mongabay. Many of these groups have adopted “no deforestation, no peat, no exploitation” (NDPE) polices, he said, and while their “enforcement and supply chain disclosures have helped reduce concession level deforestation in Indonesia … effective smallholder monitoring is limited by a lack of traceability data.”

Bottrill also noted that there’s little lowland forest remaining in the Leuser landscape, which might explain why deforestation is in decline.

“Most of the landscape’s remaining forest area is too steep and hilly for industrial plantations,” he said. “I think this is broadly the story in Sumatra where most of the Islands’ lowland forest has already been cleared for palm, fiber and rubber.”

However, Bottrill acknowledged the trend of global brands and traders adopting sustainability policies and increase their monitoring efforts to protect Leuser.

“I understand many companies are now throwing the proverbial kitchen sink at monitoring the Leuser landscape,” he said. “While commendable, this would’ve had more impact five years ago, before thousands of hectares of lowland forest were cleared for palm. It’s important now for companies to learn from this and get ahead of the deforestation curve, particularly with rising palm prices and biofuel policies creating new incentives to clear.” 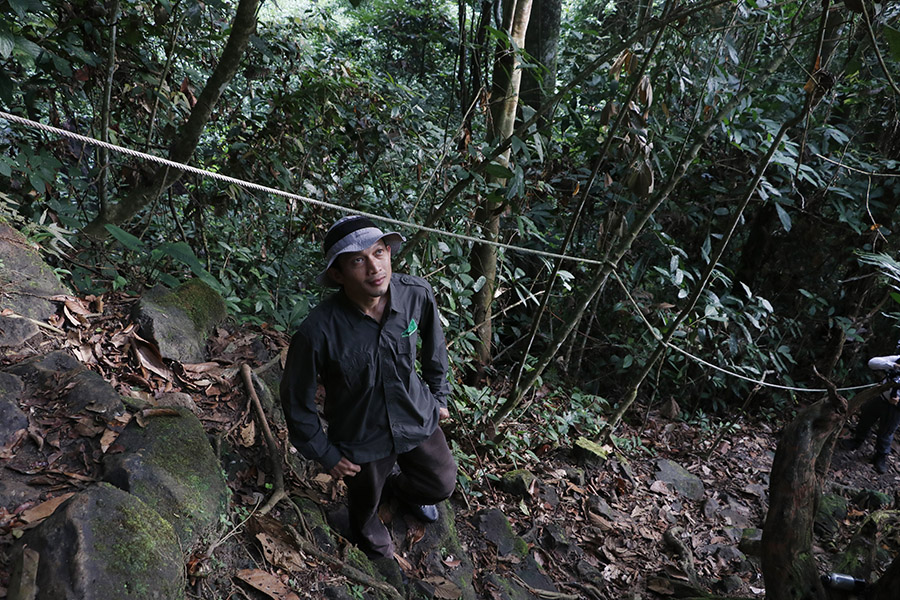 Rudi Putra in the rainforests of the Leuser Ecosystem, which he has worked to protect for two decades. Image by Junaidi Hanafiah/Mongabay Indonesia.

Since 2007, the government has designated the ecosystem a protected area. In 2016, the central government announced that it had reached an agreement with the Aceh provincial government to impose a moratorium on oil palm cultivation and mining.

The moratorium includes a review of existing oil palm and mining concessions in the Leuser Ecosystem as well as a ban on land clearing until the review is complete. A similar palm oil moratorium came into force nationwide in 2018 and expired in September 2021.

Despite this, deforestation continues to be detected within oil palm concessions in Leuser.

According to RAN’s analysis, the top deforesting company is palm oil firm PT Nia Yulided Bersaudara (NYB), which it found had cleared at least 595 hectares (1,470 acres) of forest in its concession from April 2016 to early 2021. Between January and October 2021, some 204 hectares (504 acres) of forests were lost in that concession.

RAN’s investigators also went to the field to verify the deforestation detected by satellite and found the company to be clearing forests and building new roads inside its concession. The field investigators discovered piles of harvested lowland timber inside the concession and logging trucks taking the wood out. 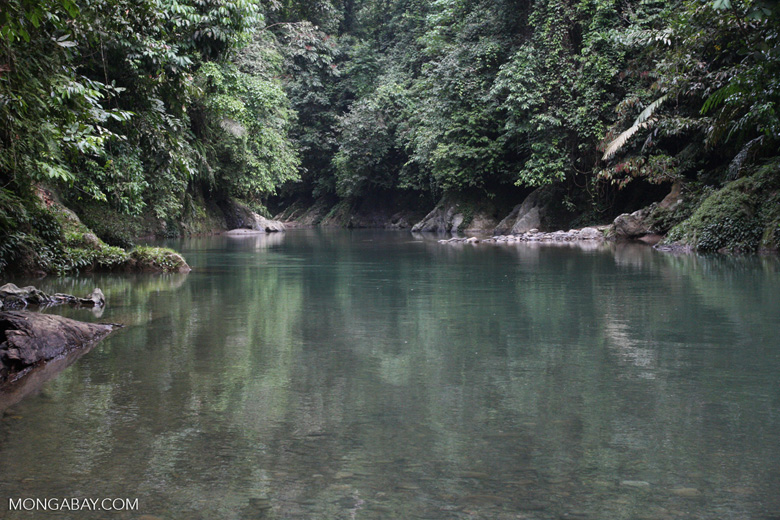 A deep pool in the Batang River in the Leuser Ecosystem. Image by Rhett A. Butler/Mongabay.

Besides NYB being by far the top deforesting company in the ecosystem, it’s also potentially mired in collusion with the former acting governor of Aceh, Tarmizi Abdul Karim, who granted the company its initial permit. According to RAN, company registration documents name Dedy Sartika, a son-in-law of Tarmizi, as the president of NYB.

The Aceh government later dissolved the BPKEL in October 2012, opening the way for Tarmizi to issue the permits for NYB.

RAN said this “creates a strong appearance of conflict of interest that merits further investigation.” But the government hasn’t initiated an investigation into the case, or revoked NYB’s permit during its review of existing palm oil concessions, RAN said.

This, coupled with the ongoing deforestation within concessions in the ecosystem, means the moratorium on forest clearance inside Leuser isn’t being respected, according to RAN.

“Five years after the declaration of the palm oil moratorium in Aceh by the national and provincial governments, it has not been effectively implemented inside all existing palm oil concessions in the Leuser Ecosystem,” RAN said. 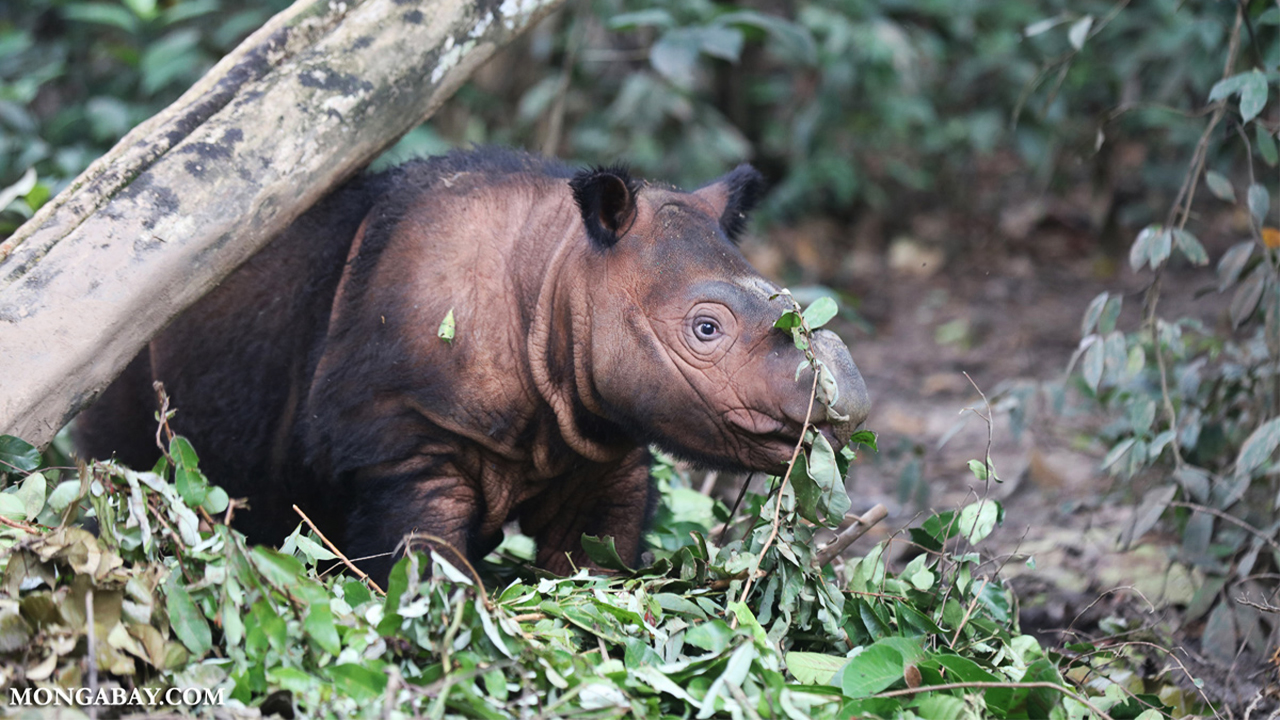 A Sumatran rhino, pictured here at the Sumatran Rhino Sanctuary in Way Kambas National Park. The Leuser Ecosystem is home to what is likely one of the last breeding populations of this critically endangered species. Image by Rhett A. Butler/Mongabay.

No room for complacency

Despite the progress made by stakeholders in protecting the Leuser Ecosystem, Rudi warned against complacency, citing the persistent threats to the ecosystem’s forests.

“Logging and encroachment still exist,” he said. “That’s what we still need to be cautious of, so that deforestation can continue to go down, even though it will be difficult for us to achieve zero deforestation.”

That risk is evidenced by the ongoing deforestation within palm oil concessions. And as long as global brands are still sourcing from plantations within the ecosystem, they can’t guarantee deforestation-free palm oil in their products, according to RAN.

That means much more needs to be done by brands like Unilever, Nestlé, Procter & Gamble, Mondelēz, PepsiCo, Ferrero and their suppliers, RAN said.

For one, brands could persuade companies to stop deforesting even if they’re not directly connected to them, Rudi said.

“There are still companies [not directly connected to global brands] that haven’t received guidance [on sustainable palm oil production],” he said. “Therefore, these global brands’ involvement is needed.”

“This is because small farmers in Indonesia are obligated to get certified under ISPO by 2024. Without support, it will be difficult,” he said. “Brands could also help farmers in increasing their productivity. And then they could also buy these farmers’ sustainable products, so that the supply chain is not limited [to large-scale plantations run by big corporations]. Brands need to expand their supply chain to include farmers who manage their plantations sustainably.” 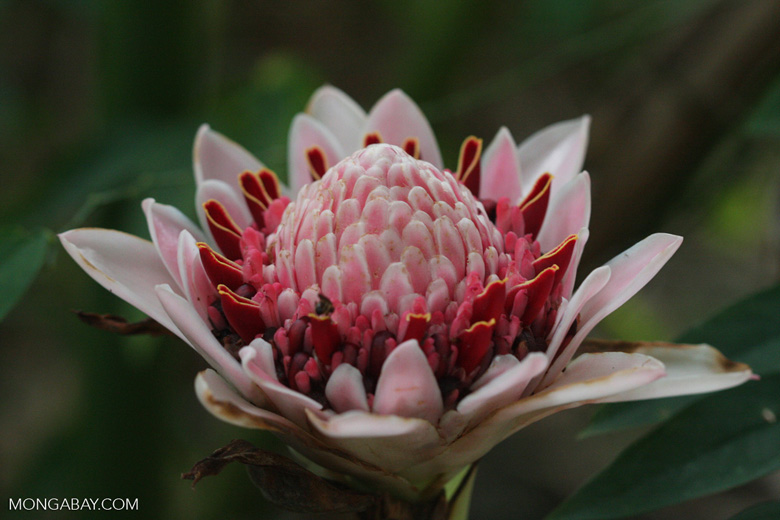 The government should also strengthen the protection of the Leuser Ecosystem by banning the clearing of all natural forests that have high conservation value and high carbon stock, Rudi said.

There are still areas of lowland rainforest available for conversion to oil palm and pulpwood plantations. These are not protected by the Indonesian government’s ban on clearing primary forests, according to RAN.

Therefore, it’s important for the government to ensure the protection of all natural forests, regardless of whether they’re in areas zoned for protection and conservation or for production, he said.

“Don’t let natural forests get destroyed no matter where they are,” Rudi said.

This article, written by Hans Nicholas Jong and posted on the MongaBay website on January 3rd, 2022: