Hunting for meat takes an unusually high toll on orangutans.

Orangutans have the longest birth interval of any land mammal, with females usually producing no more than three or four babies in their lifetime. That makes them particularly sensitive to hunting pressure, where the loss of just one individual has a huge effect on the overall viability of a population. 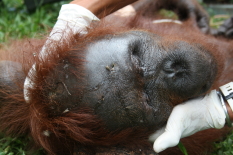 Hunting and using orangutans for sustenance have always been factors in Borneo and Sumatra, and traditional hunting by indigenous people has been responsible for a number of local extinctions. Although hunting by indigenous peoples for food is less of an issue today, a survey conducted in Kalimantan suggested that up to 1,000 orangutans are still lost to local hunting pressures every year (Meijaard, 2010). Research suggests that if local people no longer hunt orangutans it's because they're so rarely seen, rather than because of any change in beliefs (Marshall et. al., 2006).

More troubling is the more recent report of over 100,000 orangutans lost on Borneo during a 16-year period (1999-2015). This loss is attributed to killing outside of protected areas, largely due to natural resource extraction, but also to direct killing due to hunting from within forests (Voigt, et al. 2018).

The killing of orangutans by plantation workers, or by farmers who see them as pests, is still a serious issue, and the majority of orangutans currently in rehabilitation centers are orphans rescued from plantations after their mothers have been killed.

There have also been occasional reports from Aceh that suggest elements of the military have hunted orangutans for sport during the recent separatist conflict.