About the Orang Utan Republik Foundation

Most wild orangutans are found in the country of Indonesia. Wild orangutans are only found on the islands of Borneo and northern Sumatra. The orangutan's forest habitat in that country is declining rapidly due to habitat loss and poor forest management. As a result, orangutans are dying from causes that are immediate (killed as pests or for pets) and gradual (increased competition or starvation). To save the orangutan from extinction, local Indonesians must become aware of the unique qualities of orangutans; their need for forest habitat to survive; the laws protecting them; and the consequences of illegally buying, selling, or owning them. Ultimately, Indonesians must come to value orangutans and the other wildlife that lives in their country. This will come about through effective and continuous education combined with outreach campaigns conducted by the Indonesians themselves that move and inspire their society to ensure the orangutan's long-term survival.

OURF can accept donations from individuals, corporations, foundations, and other charitable and grant-giving institutions in support of its educational programs. 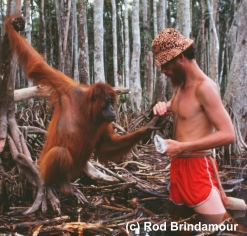 investigating the symbolic communication abilities of a juvenile Sumatran orangutan at the Fresno Zoo. For his doctoral dissertation project, he spent two years in Indonesian Borneo teaching sign language to ex-captive orangutans in the first such study to take place in any ape's natural habitat. He later co-founded and served as vice president of the Orangutan Foundation International from 1986-2004. Dr. Shapiro and his Indonesian wife, Inggriani, were inspired to create OUREI in response to the education needs underscoring the crisis facing orangutans today, particularly in Sumatra.

To reach our goal of empowering Indonesians to become the main drivers of orangutan conservation, OURF oversees the activities of local Orangutan Caring Clubs; coordinates projects with other organizations; and implements education, outreach, and scholarship initiatives.

The list of OURF's accomplishments continue to grow as concerned people and organizations support our efforts to collaborate, motivate, and move the Indonesian public to save the orangutan and its habitat. The ultimate beneficiaries are not only the orangutans, but the people of Indonesia and all people around the world who depend on the important ecological services that the orangutan's tropical rainforest home provides, such as oxygen production, carbon sequestration, and regulated rainfall patterns.