Intelligence in great apes has historically been determined by the extent of tool use shown by wild populations, particularly as tool use and tool manipulation was once thought to be a distinctly human ability. As a result, for a long time chimpanzees, which exhibit a dizzying array of complex tool use at various research sites in Africa, have often been thought of as the most intelligent non-human ape, and the one most like ourselves. Meanwhile gorillas have long been denigrated in the popular media for their lack of smarts on account of the virtual absence of observed tool use in the wild. Orangutans have usually been placed somewhere between the two, but laboratory tests on captive orangutans and research in the last few decades on levels of tool use and innovation in semi-wild and ex-captive orangutans have revealed them to be astonishingly intelligent animals. 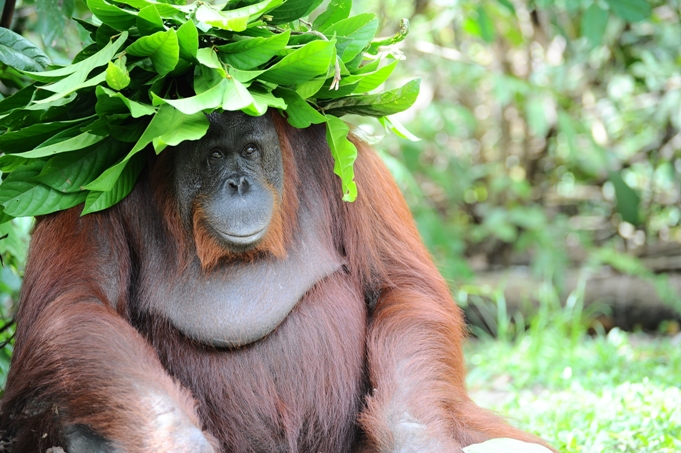 Tool use in wild orangutans was usually thought to be restricted to two behavioral contexts: nesting/ covering and agonistic displays (Galdikas, 1982). Orangutans manipulate branches, saplings, and leaves to build their night nests, and have been observed breaking off and dropping or throwing branches and sticks at other orangutans, species or human observers during agnostic displays (Galdikas, 1995). Males have also been observed pushing over snags while performing their long calls, and during the first 9 years of a long-term wild study at Tanjung Puting in Borneo, orangutans were also observed rubbing their faces with crumpled leaves pulled off adjacent branches, before dropping them or throwing them at human observers. Only once during this period of the study was an instance of tool use observed in a context other than agnostic displays or nesting, when an adult male broke off the end of a dead branch and scratched himself in the vicinity of his anus for 30-35 seconds, before putting the stick in his mouth and biting a piece off (Galdikas, 1982).

More recent studies at Suaq Balimbing in Sumatra have found evidence of orangutans using tools to extract honey, ants or termites from tree holes, manipulation of vines to swing across gaps in the canopy and using leaves to fashion gloves to handle prickly fruits (Russon et al, 2009).  Further similar levels of innovative feeding techniques have been observed at the Tuanan site in Borneo (van Schaik et al, 2003).

In comparison to the relative rarity of tool use observed in wild populations, such activities are common in rehabilitant, ex-captive, and semi-wild orangutans. At Tanjung Puting in Borneo, semi-wild ex-captive orangutans were observed using sticks to dig holes, jab at other orangutans, stir liquids, rake objects from fires, prying loose objects and as an arm extender to reach far away objects (Russon et al, 2009; Russon, 2004). Sticks and branches seem to be an important part of ex-captive innovation, with similar activities at other rehabilitation sites having been observed. At Ketambe in Sumatra orangutans were observed using sticks to open fruit, disturb ant nests, probe rat burrows and poke other animals in cages (Russon et al, 2009), and at a rehabilitation center in Ketapang, West Borneo, a female adult orangutan was observed using a stick to try and pry open the lock on her cage.

Human-made objects available are often used, and orangutans raised in their vicinity have proved to be expert imitators, with orangutans at Tanjung Puting being observed putting together make-shift clothes out of leaves and rags, putting rice on to ‘plates’ of bark, trying to put mosquito nets overnight nests, breaking in to buildings and commandeering dugout canoes (Galdikas 1982 & 1995). American Sign Language (ASL) lessons conducted by OURF president Gary Shapiro on ex-captive females Princess (Shapiro, 1982) and Rinnie (Shapiro & Galdikas, 1999) at this site demonstrated that orangutans were just as able to communicate with humans via this medium as were the famous signing chimpanzees and gorillas, although Princess and other orangutans did seem to be generally more reluctant to converse about topics other than food. A recent study on intentional gestural signals of wild Bornean orangutans identified 21 types of such signals that led to acquiring 8 types of goals (Knox, et al., 2019) suggesting a natural behavioral substrate for the inculcation of a human trained language.

A number of reasons have been put forward to explain the discrepancy in the level of tool use, tool manipulation and innovation observed between wild and ex-captive orangutan populations. Why, if orangutans at rehabilitation centers are intelligent enough to make and manipulate tools for their own gain, why do they generally not do so in the wild?

Studies have shown social learning and cultures contribute substantially to orangutans’ level of innovation in the wild, with many of the different types of tool use observed being passed down through generations. Ex-captive orangutans, deprived of their mothers’ guidance, have to invent their own way of doing of things, and, lacking the social constraints of life in the wild, are free to explore their surroundings and take advantage of objects wild orangutans would generally ignore. The levels of imitation shown by ex-captives are also a likely result of humans having replaced orangutans as parental figures. As already discussed, orangutans have an extraordinarily long period of infant dependency, with infants spending between 5- 9 years learning every aspect of orangutan life from their mothers. Deprived of this, ex-captive orangutans seem to pick up atypical, or unusual, behavior from watching humans, and this contributes to the level of imitative behaviors displayed.  Ex-captive orangutans at most sites also receive supplemental feeding, and freed from the endless quest to find food, which underpins almost all aspects of wild orangutan behavioral ecology, ex-captive orangutans have the time to experiment and innovate in different ways (Galdikas 1982; Russon et al., 2009).

It has also been argued that orangutans in the wild do not exhibit complex tool use simply because they do not have to. Millions of years of evolution have equipped them with the dental and physical morphology to withstand life as frugivores in the forest canopy, and, although animals in captivity and semi-wild environments have proved that orangutans have the intelligence and cognitive ability to construct and manipulate tools, orangutans have survived in the wild for millions of years without needing to.

Russon, A. (2004) Orangutans: Wizards of the Rainforest. Firefly Books, USA.