Orangutans are the largest tree-dwelling animal in the world, and the second-largest non-human great ape, after gorillas. A mature female orangutan may weigh approximately 40kg and have a standing height of 110 cm. although this is about the same weight as a subadult male, orangutans are extremely sexually dimorphic, and this is never more apparent than in the disparity in size between the adult females and adult males. An adult male at maturity will weigh almost twice as much, at approximately 80kg, and dominant adult males who have developed cheek pads and enlarged throat sacs have been known to weigh as much as 120kg. They will have an average standing height of 130cm (van Schaik & Delgado, 2000; Morris, 2008). 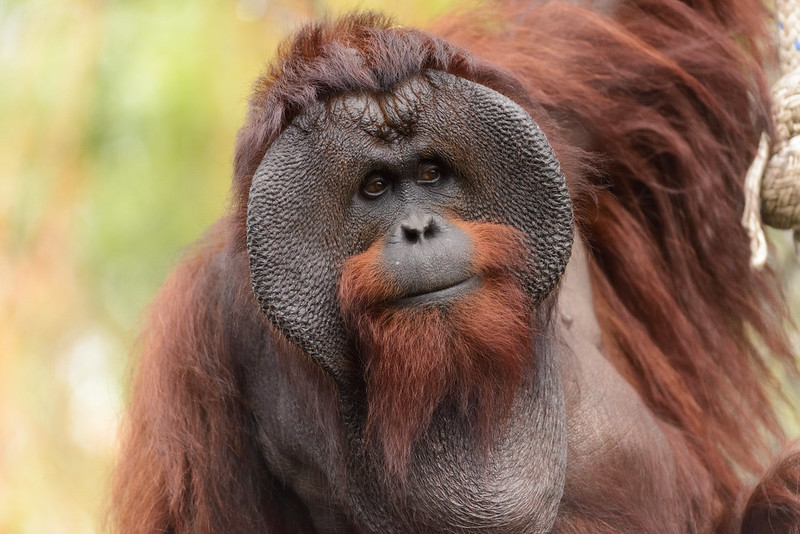 Sumatran orangutans are the smaller of the two species and are easily identifiable by their longer, denser, lighter-colored fur, which ranges from a light red to cinnamon color, and their narrower face, which is often framed by what looks like a beard. Generally considered more gracile looking than its Bornean cousin, the flanges of the males, jutting cheek pads made up of fibrous fatty tissue, tend to lie flat on the face of the Sumatrans, and males generally have smaller throat sacs. The Bornean orangutan is larger than the Sumatran, has darker fur of an often maroon or dark red color, wider faces, and the males of this species tend to have flanges that protrude forward (Goossens et al, 2009; van Schaik & Delgado, 2000; Morris, 2008).

Spending almost all of their time in the forest canopy, orangutans, despite their great size, are perfectly adapted to life in the trees. Their forearms are incredibly long and strong, with flexible shoulder joints and an intermembral index, the ratio of the fore-limb to hind-limb length, of 140, meaning that when orangutans walk upright on their hind legs, the fingertips touch the ground (Morris, 2008).

They have hook-like hands, long curved fingers and short thumbs, which are about one third the total length of the palm. Their long fingers give the orangutan the ability to create a "double-lock" grip, whereby the fingers are able to wrap around thin creepers, vines and branches so much that the last finger bone comes to lie parallel to the bones of the palm, allowing the fingernail to lock against the skin of the palm (Morris, 2008).

In comparison to their forearms, their hind limbs are short, and they have hand-like feet with curved fingers and shortened big toes, which diverge from the sole and can assist in a variety of gripping movements. Their hip joints are extremely flexible, as are their ankles, and their wrists are capable of swiveling through 150 degrees (Morris, 2008; van Schaik & Delgado, 2000).

Orangutans possess the same dental morphology as humans, with two incisor teeth, one canine, two premolars and three molars in each side of each jaw, upper and lower. However, the dental arch is different, and, like other non-human great apes, they have a gap, called a diastema, between the second incisor and the canine, which is projected forward. It has been argued that the orangutan dental morphology, the broad central incisors, the small lateral incisors and short maxillary canines, is related to historic bark stripping and feeding on hard objects (van Schaik & Delgado, 2000; Taylor, 2009).