At a time when we see little or no respect given even to each other, how do we get people to see how important it is to respect the rights of critically endangered species to exist? How, when man is not even driven to immediate action to reverse climate crisis tipping points to preserve their own futures, do we encourage action to save orangutans and their rainforest homes? It is a challenge!

Orangutan Caring Week is Nov. 10-16 and this year's theme is Respecting the Rights of Critically Endangered Species. It is a worldwide event held annually every November which began as Orangutan “Awareness” Week in 1995, but it soon became apparent that just being aware of the plight of orangutans was not enough. People needed to care and care enough to be moved to action to save these incredible red-haired apes and their rainforest homes.

Each and every animal on earth has as much right to be here as you and I do - maybe even more so. It is imperative that we respect the rights of critically endangered species and their right to safe, thriving habitats unbothered by human encroachment and interference. The clear fact is that we must prioritize the preservation of rainforests and important species like orangutans for our own survival, but should the survival of man be the primary motivating factor to save them? Don't orangutans deserve the right to exist and survive on their own merits? Of course, they do!

Orangutans are intelligent, sentient beings that have lived in perfect harmony with nature for millions of years yet, due to human activity, their populations have declined by more than half over the past 60 years, and their habitat has been reduced by at least 55% over just the past 20 years.

We need nature for our very existence and only by saving nature do we save ourselves yet, we continue to destroy critical rainforest habitat and push hundreds of species ever closer to extinction. Rainforests and related ecosystems provide important services from the air we breathe, to climate moderation, to water quality and erosion control, to existing as storehouses of genetic and ecological biodiversity. Rainforests need to be sustainably managed to maintain these life-giving services.

The orangutan's intrinsic value is so precious that it cannot be measured in dollars. If we were to assign a true value to orangutans and the rainforest, we could in no way afford the exploited products that come at the high price of extinction. There would be no affording the timber or palm oil or minerals. There would be no profit for corrupt officials and greedy corporations.

The combined impacts of habitat loss for timber and palm oil plantations, habitat degradation, illegal hunting, and an illegal wildlife trade have pushed the orangutan toward an extremely high risk of extinction in the wild, yet they live in total harmony with nature, people do not. With the climate crisis and a mass extinction threatening the very existence of thousands of animals and plant species - as well as threatening human populations - the urgency of action has never been more important. Richard Zimmerman, Founding Director of Orangutan Outreach, shared this urgency stating, "Orangutans are critically endangered in the wild and we need to help them NOW! Extinction is forever!”

Sadly, Orangutan Caring Week can easily become just another one of many in a long string of forgettable special awareness days dedicated to yet another endangered species which shows up as a fleeting post or picture that we scroll past on our Facebook and Twitter feeds, rarely moving us to much more action than a 'like', share or re-post. We are on crisis and issue overload with climate change, plastic, and politics. Saving orangutans to some may seem trivial in comparison. It is not.

We are often bombarded with incomprehensible and hard to grasp facts about how many orangutans are left in the wild, how many years they have left before they go extinct, or how many hectares or football fields of their rainforest homes are cut down each minute of every day. We see heartbreaking photos of orphans, mutilated, tortured or abused orangutans and pictures of devastated rain forests and may feel powerless to do anything about it.

Suffice it to say, orangutans are in critical danger, but so are hundreds of living beings. Scientists estimate that between 150-200 species of plant, insect, bird and mammal become extinct every 24 hours, so why should we especially care about orangutans? There are hundreds of species that deserve our attention but by saving these incredible apes we can save not only orangutans but all the species on earth - including man.

Truly saving orangutans and safeguarding their futures would mean that we have finally made all the necessary adjustments to our selfish, greedy, and excessive consumptive practices that are ruining our Earth's precious ecosystems and would mean that we are taking seriously our personal impact on all life on our planet. As individuals, we need to make an impact on the political and corporate machines and demand transformation or there will be no hope for orangutans and, in turn, no future for man.

Why care about orangutans? By saving orangutans, we save ourselves and our planet. If we can protect and save this closest of evolutionary cousins of ours and protect their rainforest homes, it would mean we are making the necessary changes to possibly protect all life on earth. Orangutans are critically endangered and maybe the first great ape to go extinct. They share 97% of our DNA and, as one of our closest relatives, it is our responsibility to protect these intelligent, gentle apes. With each passing species, the Earth becomes a little less whole. A world without orangutans will lose much of its soul.

"It can be difficult sometimes for people to see the similarities between humans and orangutans," says Leif Cocks, Founder of The Orangutan Project. "I've spent the majority of my life with these great apes and witnessed their humanity many times. Orangutans have cognitive thoughts and have as much humanity as you or me, sometimes more so. They have some of the most beautiful souls you'll ever come across."

Saving orangutans also helps to save many other endangered species that live in the same forest, like tigers, elephants, rhinos, gibbons, sun bears, clouded leopards and countless other species of plants and animals.

So, who cares? Well, there are dozens of hardworking, dedicated organizations, conservation groups, rescue and rehabilitation centers all working to save these incredible great apes. Gary Shapiro, President of Orang Utan Republik Foundation expressed that, “Respecting the rights of orangutans to co-exist with humans is essential if we are to save them for the long term. While orangutans are unable to speak out to defend themselves, orangutan advocacy groups will continue to give voice to orangutans and their rights as critically endangered species and as individual sentient beings."

We cannot all have boots on the ground, but we can fully support those who do whether financially or with our time and efforts. Many of these groups, along with zoos and animal facilities worldwide, as well as individuals, will be participating in Orangutan Caring Week with special social media campaigns, awareness and fundraising events using this as a perfect opportunity to spread awareness about the plight of orangutans and the urgent dangers facing their rainforest homes with the goal of motivating people to care – and to care enough to be moved to action. If ever there was a time to care, that time is now! 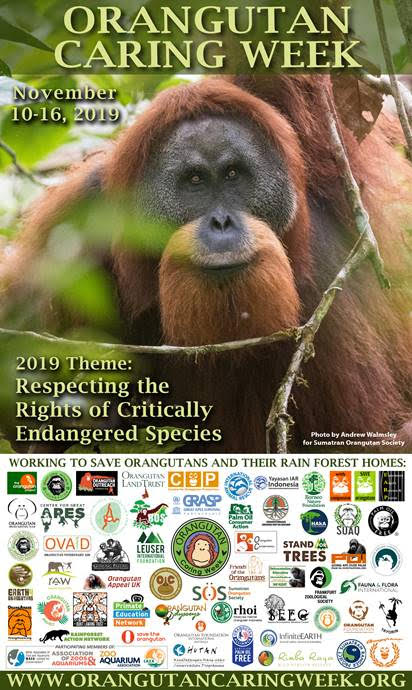