- A new study indicates that the Tapanuli orangutan, already the world’s most threatened great ape species, faces a much greater risk of extinction than previously thought.

- It estimates the orangutans today occupy just 2.5% of their historical range, and attributes this to loss of habitat and hunting.

- Those threats persist today and are compounded by mining and infrastructure projects inside the Tapanuli orangutan’s last known habitat in northern Sumatra.

- At the current rates at which its habitat is being lost and the ape is being hunted, the extinction of the Tapanuli orangutan is inevitable, the researchers say.

JAKARTA — Onrizal Onrizal remembers hearing stories of human-like creatures living in the forest when he was growing up in Sungai Dareh, a town in western Sumatra, Indonesia. Legend had it that the creatures, called orang pendek, or “short people,” by the locals, disappeared from the forest in the 1970s.

Today, Onrizal is a forestry researcher at North Sumatra University, where he studies the biodiversity of his native island, including the orangutans that likely inspired the stories of the orang pendek. And while the stories may just be stories, there’s still an element of truth to them: the creatures are indeed disappearing from the forest.

In their latest study, published this month in the journal PLOS ONE, Onrizal and other researchers scoured the historical record for any references to the Tapanuli orangutan (Pongo tapanuliensis), the most recently described orangutan species and also the most endangered great ape in the world. Today, fewer than 800 of the apes are known to inhabit a single site, the Batang Toru forest in North Sumatra.
Their current habitat likely accounts for just 2.5% of the total range across which they were found up to 130 years ago, the researchers found. They estimate this range shrank from nearly 41,000 square kilometers (15,800 square miles) in the 1890s, to just 1,000 km2 (400 mi2) in 2016.

To arrive at these figures, the researchers looked at rarely referenced colonial-era literature, such as newspapers, journals, books and museum records, from the early 1800s to 2009. They found these in databases including the Biodiversity Heritage Library and online historic newspapers, books and journals using location-specific keywords such as “Sumatra,” “Batang Toeroe,” and “Tapanoeli,” using the Dutch spelling.

They then cross-referenced this with searches for terms specifically referring to orangutans: “orang oetan,” “orang-oetan,” “orangutan,” and also “mawas,” “mias” and “maias,” the local names for orangutans commonly used in historical literature.

“We are missing a large part of the conservation picture by ignoring historic information,” said Erik Meijaard, lead author of the study and an adjunct professor of conservation at the University of Kent, U.K.
The researchers found that, historically, the Tapanuli orangutan inhabited a much larger area, and occurred across a much wider range of habitat types and at lower elevations than the mountainous Batang Toru forest that they inhabit today.

Much of that historical habitat was lost by the 1950s due to smallholder agriculture, before the advent of industrial-scale plantation development across Sumatra in the 1970s. The region that today makes up the districts of North, South and Central Tapanuli, where the Tapanuli orangutan now occurs, was already 52% deforested by the 1930s.

The combination of historical fragmentation of forest habitats and unsustainable hunting likely drove the apes from lowland forest areas, where they primarily used to live, to the higher-elevation forests of the Batang Toru ecosystem.

“Given the available information, we consider it likely that Pongo tapanuliensis was hunted to extinction in the increasingly fragmented parts of its former range and only survived in the remote and rugged Batang Toru mountains which may have provided orangutans with a refuge from hunting,” the researchers wrote in their paper.
This finding suggests that the Tapanuli orangutan is not a species that’s specifically adapted to living at high elevations as some scientists suggest, according to Meijaard. 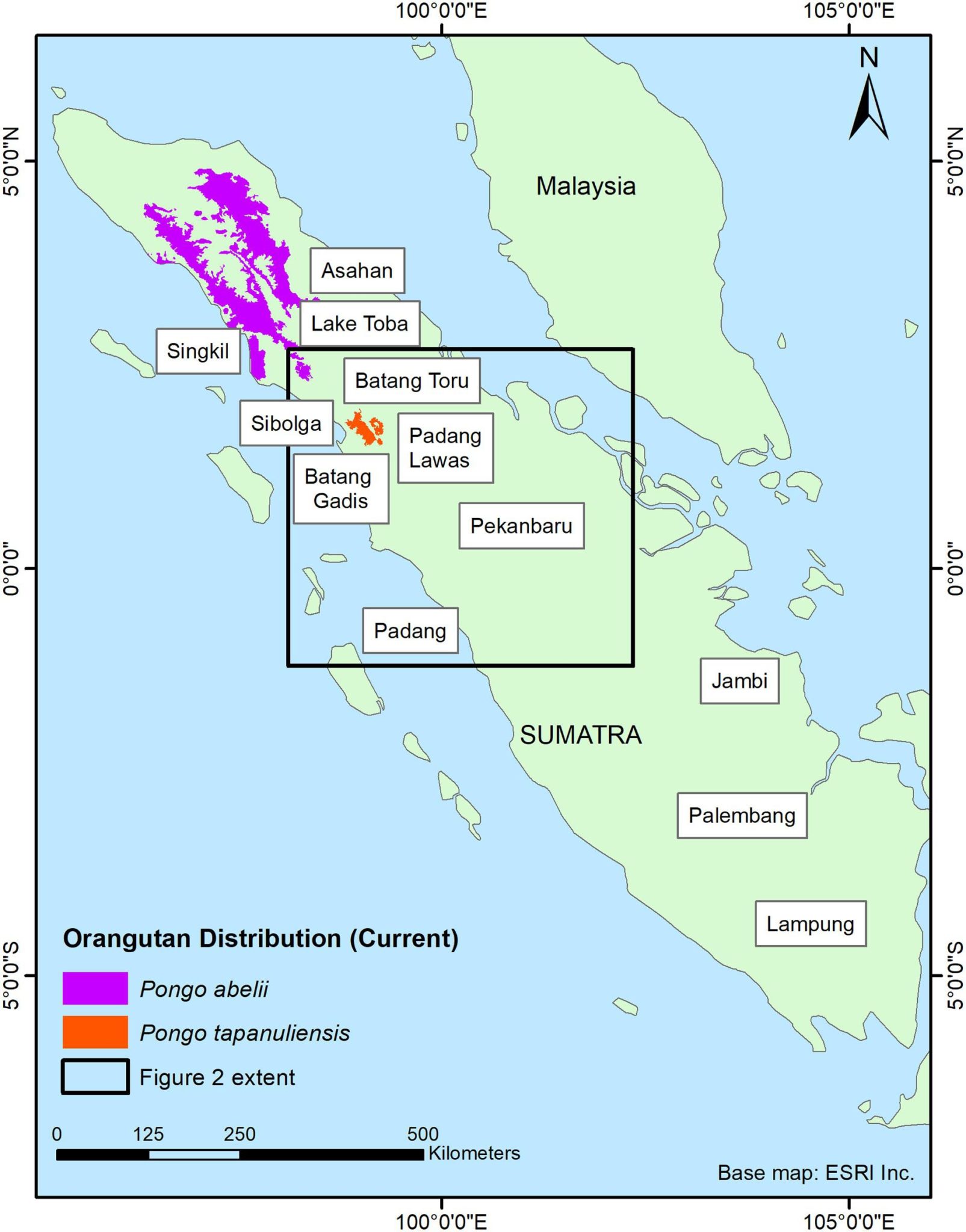 Map of the island of Sumatra, showing the current distribution ranges of Pongo tapanuliensis and Pongo abelii, and the main locations mentioned in the paper.

The findings have raised even more concerns over the survival of the Tapanuli orangutan. An estimated 767 individuals are believed to live in the Batang Toru forest, split up between three tentatively connected subpopulations.

The species continues to face the threats of hunting and conflict killing, as well as habitat loss from agriculture. New threats have also arisen: infrastructure building, gold mining, and the development of geothermal and hydroelectric plants.

The most prominent of these threats comes from the planned Batang Toru hydropower plant, which conservationists warn will jeopardize the connectivity between the orangutan’s western, eastern and southern subpopulations. This fragmentation would dramatically cut the diversity of the ape’s gene pool, leading to inbreeding, disease, and the eventual extinction of each subpopulation.

The risk of this happening has prompted major lenders, including the World Bank’s International Financial Corporation and the Asian Development Bank, to steer clear of the hydropower project. Its main backer, the Bank of China, has promised a review in light of the concerns.

Indonesia’s Ministry of Environment and Forestry says the hydropower project will not kill off the Tapanuli orangutan. It says there is still ample habitat and good forest cover throughout the landscape for the apes to continue breeding.

The ministry also cites various government efforts to protect the orangutans, including regular monitoring and a permanent moratorium on permits to clear the primary and peatland forests that cover a significant part of the Tapanuli orangutan’s habitat.

But Meijaard says his team’s new findings indicate how sensitive the Tapanuli orangutan is to the combined effects of habitat fragmentation and a rate of extraction from the wild that, on its own, will inevitably drive the species to extinction.

“The threats that drove its decline continue today, and claims by the Indonesian Ministry of Environment and Forestry that the Tapanuli orangutan has ample habitat and do not face extinction need to be carefully reassessed, because they are not supported by historic information,” he said.

In their paper, the researchers calculate that if more than 1% of the adult apes are extracted from the wild per year — either killed, translocated or captured — then extinction is inevitable, regardless of the population’s starting size.

“Our analysis strongly suggests that the remaining Tapanuli orangutans are currently in suboptimal high elevation habitat and that probably more than 1% of the population is taken out annually based on reported killing, translocation and rescue data, which predicts further population decline and imminent extinction,” Meijaard said.

Serge Wich, a co-author of the paper and co-vice chair of the IUCN primate specialists’ section on great apes (SGA), said the Tapanuli orangutan might not be specifically adapted to highland conditions and should occur in a full range of habitats, such as peat swamps and lowland-dryland forests, for optimal likelihood of survival in the wild.

Without efforts to prevent further losses to the population, the species could go extinct within a matter of several generations, according to the researchers. The ongoing fragmentation of the Batang Toru forest only exacerbates that risk, Wich said.

He called on all stakeholders, including the government, NGOs, scientists, donors, local community representatives, and industry, to develop a solid action plan for the survival of the species.
“The current patchy approach to conserve the species will in all likelihood fail,” Wich said. “In addition, the conservation of the species would benefit from transparency in terms of data on surveys, rescues, releases, etc. The lack of this is also not helping the species.”

Article posted by Hans Nicholas Jong on 7 January, 2021 on Mongabay: