- A new study has mapped out the regions where conservation actions can maximize the protection of biodiversity, carbon stocks, and water.

- The findings come in the run-up to global summits on both biodiversity conservation and climate change.

- The study identifies areas that would be suitable for “conservation management,” which include sustainable use under any locally appropriate form of governance, including Indigenous reserves.

- The researchers found that for conserving global biodiversity, the mountain ranges of the world are of notable importance, as are large parts of Mediterranean biomes and Southeast Asia

This year, decision-makers and leaders will gather to talk about the interconnected crises of biodiversity loss and climate change at a few key global conferences including the U.N. Biodiversity Conference (COP15) and the U.N. Climate Change Conference (COP26). As they deliberate, deciding where to prioritize conservation presents a challenge.

A group of researchers from more than 40 institutions have developed a way to consistently identify areas for conservation that “minimizes the number of threatened species, maximizes carbon retention and water quality regulation, and ranks terrestrial conservation priorities globally”, according to their new study published in Nature Ecology & Evolution.

“Our approach is novel in that is able to integrate various values of nature into a single map,” Martin Jung, the study’s lead author and research scholar at the International Institute for Applied Systems Analysis (IIASA) told Mongabay in an email. Past studies have looked at environmental factors individually and overlayed the results, he says, which can oversimplify findings.

The researchers found that for conserving global biodiversity, the mountain ranges of the world are of notable importance, as are large parts of Mediterranean biomes and Southeast Asia. The study also highlights western central Africa, Papua New Guinea, the western Tibetan Plateau, and the East Australian rainforest. 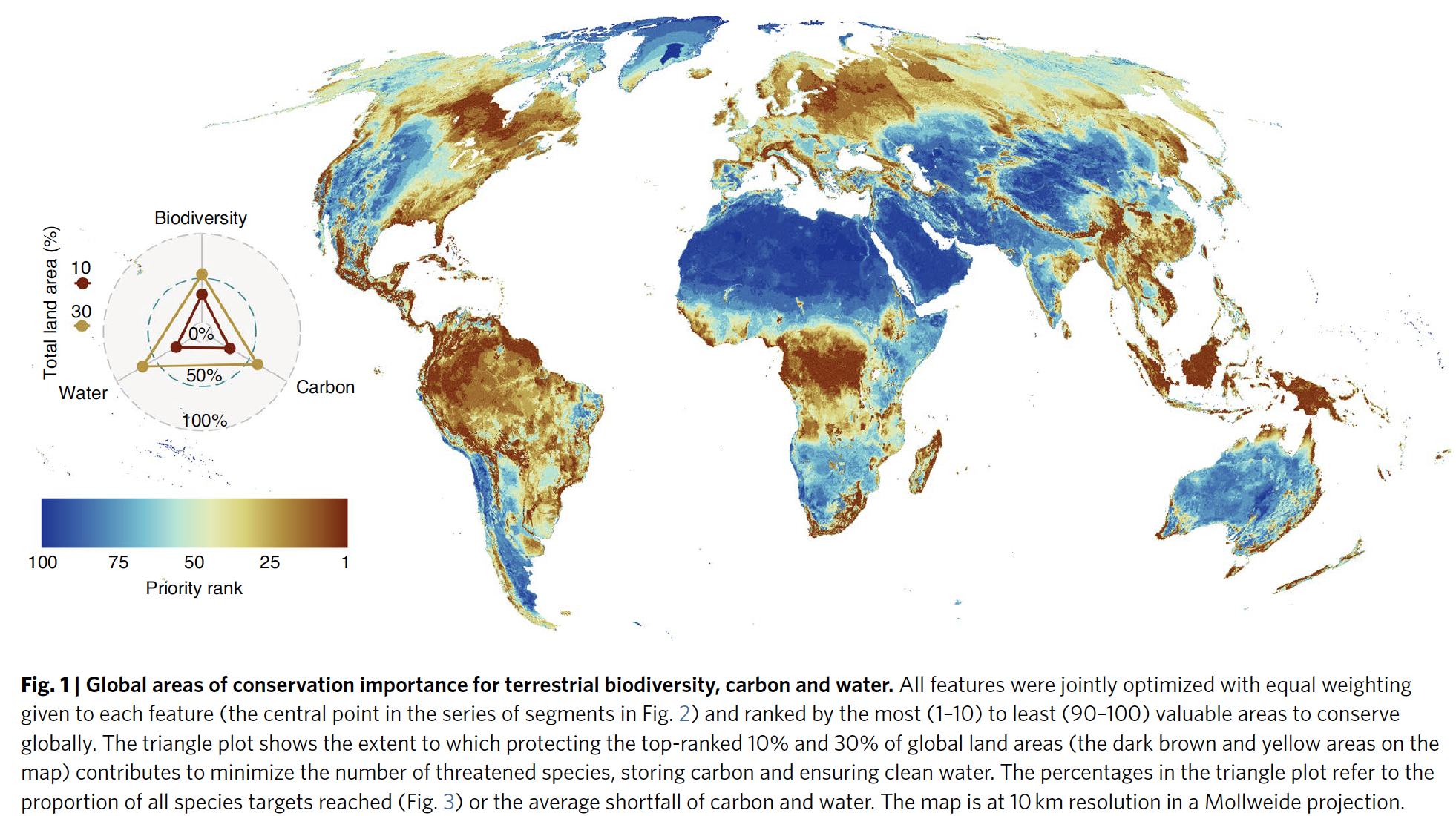 “We need to find those places that are globally important,” Piero Visconti, a co-author of the study who leads the Biodiversity, Ecology, and Conservation Research Group at IIASA told Mongabay in an email. “Their loss would imply a disproportionate loss of global biodiversity.”

This is the first analysis of its kind to include a representative sample of plant species at fine-scale alongside animals, Visconti said. With plants included in the analyses, some areas that may be have been overlooked were revealed as high-priority conservation areas, such as the Cerrado grasslands in Brazil, the Cape Floristic Region in South Africa, and Western Australia.

Among the top-ranked 10% areas for global carbon storage are Eastern Canada, the Congo Basin, and Papua New Guinea.

The eastern United States, the Congo, European Russia, and eastern India ranked among the most important areas for water quality regulation.

The authors did not account for people in their analyses, ignoring factors such as human population density and growth. Visconti says this was a deliberate choice, because “we believe global analyses can never reach an adequate level of accuracy when considering socio-economic data or local impacts on people. It would be actually quite dangerous to do or imply that is feasible for many reasons.”

Managing just the top 10% of the highest importance areas mapped in the study could achieve conservation targets for 42.5% of all species considered, as well as conserve 26% of total carbon and 22.1% of potential clean water around the globe, the authors say.

However, the paper also does not specify how much land should be protected or which approaches to apply.

“We did not ask the question of how much is enough,” Visconti said. Instead, the authors produced a ranking of importance, which Visconti says is, “agnostic to political targets for area-based conservation.”

One such “area-based” target that has received immense attention by world leaders is “30 by 30,” —a plan to protect 30% of global land and sea by 2030 through area-based conservation measures such as establishing protected areas and parks.

This plan, included in a recent draft of the U.N.’s Convention on Biological Diversity as one of its 20 post-2020 strategies, has come under criticism from some Indigenous groups and allies who estimate that up to 300 million people could be negatively affected by area-based conservation measures, which evict people from their ancestral homes.

“In our study,” Visconti said, “we never advocate for strict protection of those places which we flag as important based on our quantitative analysis.”

Rather, the study identifies areas that would be suitable for “conservation management,” which include sustainable use under any locally appropriate form of governance, including Indigenous reserves.

“Using top-down or violent means to secure an area has no place in this world,” Visconti said, “in addition to ensure conservation is done equitably by empowering local people, we need to recognize the threats to local and indigenous people from legal and illegal extractive activities. Equitably and effectively managed reserves can save people’s lives. ”

“We hope to raise awareness of the importance of these areas for biodiversity and for human wellbeing,” Visconti said. “Understanding the global importance of any given place helps to support those that argue for its protection.”

Original article published by Liz Kimbrough on 28 September 2021 on MongaBay: