Deforestation in Borneo threatens one in four orangutans, study says

JAKARTA — Habitat for up to a quarter of the known population of Bornean orangutans will disappear across the island of Borneo under predicted patterns of deforestation over the next decade, a new study warns. 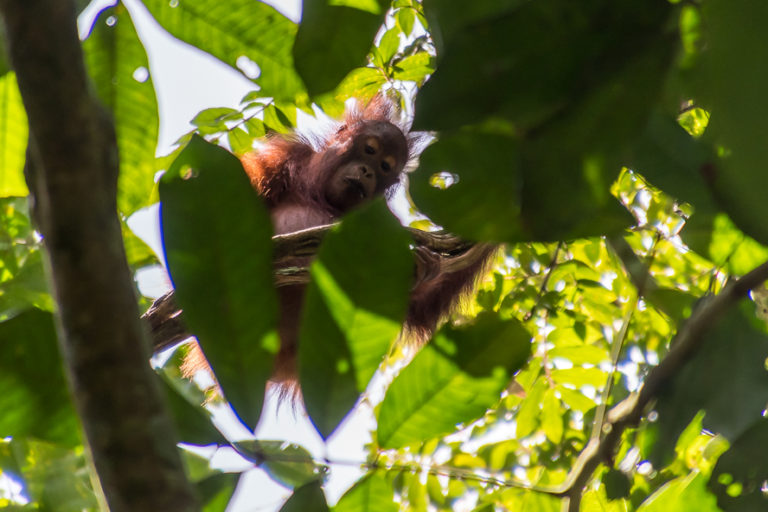 The island of Borneo is split between Indonesia, Malaysia and Brunei, although it’s not certain that Bornean orangutans (Pongo pygmaeus) still occur in the tiny kingdom of Brunei. Nearly 150,000 of these great apes died between 1999 and 2015, largely due to deforestation and killing, according to a 2018 study. That study also projected that habitat loss would lead directly to the total future loss of 45,300 orangutans between 2020 and 2050.

“Essentially, we have improved the deforestation model and thus the projection for this study,” said Maria Voigt, a researcher at the Max Planck Institute for Evolutionary Anthropology in Germany and lead author of both the 2018 paper and the new study. She added that the previous habitat loss projection assumed a constant rate of deforestation.

“The new analysis is based on a much more sophisticated deforestation model which accounts for additional drivers and the changing pace of deforestation over space and time, building this into the projections,” Voigt told Mongabay by email.

In 1973, three-quarters of Borneo, the world’s third-largest island, was still forested and home to an estimated 288,500 orangutans. But four decades of fires, logging, mining and industrial plantations, particularly oil palms, destroyed more than a third of Borneo’s rainforests. The orangutan population had dropped to 104,700 individuals by 2012, according to global wildlife conservation authority the IUCN, which lists the species’ conservation status as critically endangered.

Voigt and her colleagues applied their deforestation model to orangutan ranges in all five Indonesian provinces and two Malaysian states found on Borneo. They identified drivers and patterns of land-cover change from 2000-2017, and extrapolated them under a business-as-usual scenario.

They found that the highest potential deforestation would occur near areas that have already experienced forest loss. These would be followed by concessions for industrial timber and oil palms. Logging concessions appeared to have a lower probability of forest loss, with the exception of concessions in Indonesia’s South Kalimantan province. Protected areas, especially strictly protected one, were found to have low levels of potential deforestation, the modeling projected.

The findings highlighted that the areas with high deforestation probabilities also harbored high population densities of orangutans, notably the Sabangau peatlands of Central Kalimantan and the Lesan-Wehea landscape in East Kalimantan, both in Indonesian Borneo. Orangutans in protected areas and logging concessions where the probability of deforestation was expected to be low would also be affected.

“Our analysis indicates the importance of protecting orangutan habitat in plantation landscapes, maintaining protected areas and efforts to prevent the conversion of logged forests for the survival of highly vulnerable wildlife,” the study says. 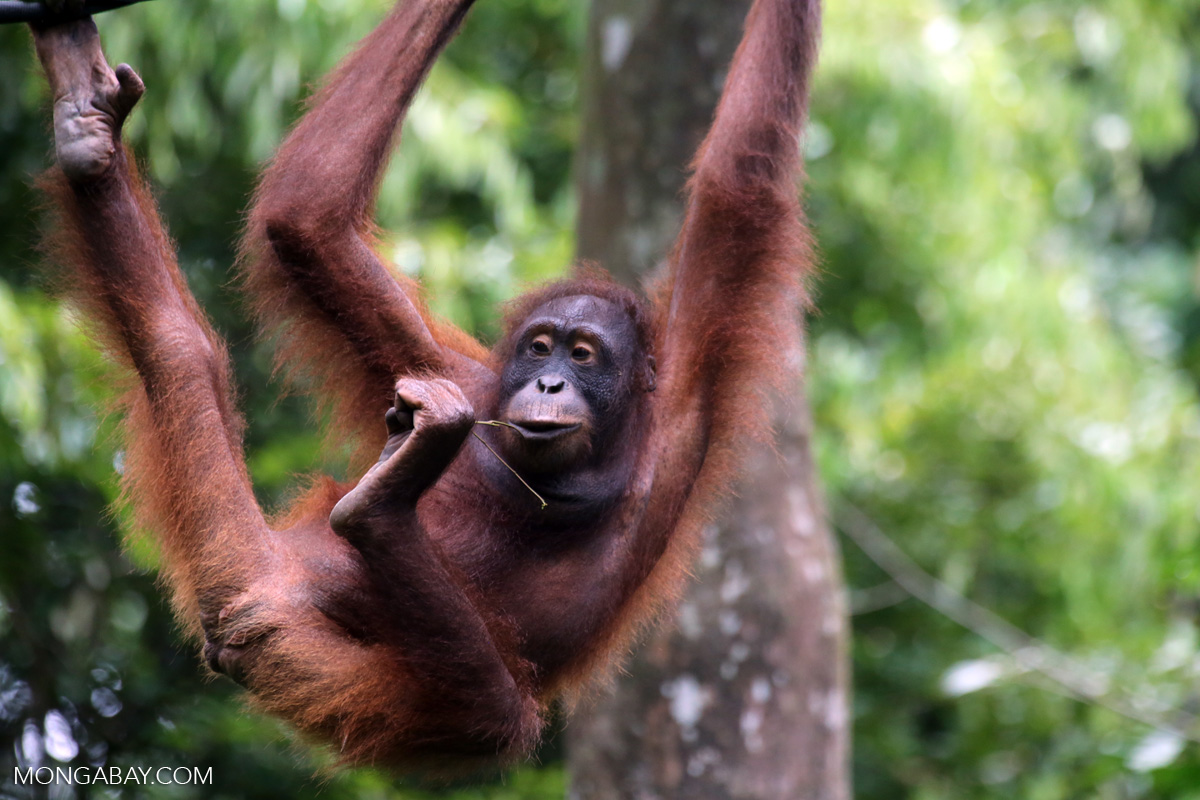 A Bornean orangutan at the Sepilok Rehabilitation Center in Sabah, Malaysia. Image by Rhett A. Butler/Mongabay.

The study’s authors suggested the largest immediate conservation gains could come from curbing deforestation in and around plantation landscapes, through efforts such as corporate zero-deforestation pledges, sustainability certificate schemes, ecosystem restoration, and a halt on clearing land.

However, they noted that their deforestation projection excluded contexts that could exacerbate deforestation and orangutan habitat loss, such as political unrest, the still-unfolding socioeconomic effects of the COVID-19 pandemic, and orangutan population declines through hunting, killing in human-animal conflicts, and live capture.

They also noted the potential impacts of political agendas and development priorities, such as the ongoing development of Indonesia’s new capital city in province of East Kalimantan. Voigt said the impacts of large cities typically extend over much larger distances because of all the associated infrastructural needs for a growing human population. These secondary impacts could be quite substantial if they extend beyond the planned design or if the development requires major upgrades to road infrastructure in Borneo, she added.

“One of the key visions for the new capital is sustainability, and the investment for the development centers very much on the green economy,” she said. “Therefore, one way our study could be used is as a baseline assessment of forest status and business-as-usual deforestation predictions which can be compared with the observed deforestation in years to come.”

Orangutans are known as an “umbrella species”: because they require large tracts of forest to survive, conserving their habitats has the benefit of protecting other wildlife living there. Indonesia is home to three orangutan species — the Sumatran (Pongo abelii) and Tapanuli (Pongo tapanuliensis) orangutans are found only on the island of Sumatra — which are protected under the country’s 1990 Conservation Act. The government has also imposed a permanent moratorium on clearing primary forests and peatlands — although a major exemption exists for those tracts of primary forest and peatlands that were licensed out as concessions before the 2011 moratorium came into force.

“Ideally, conservation actions now should not only attempt to act on today’s information about deforestation patterns,” the study says, “but also be adaptive to potential changes in drivers and threats.”

This article was written by Basten Gokkon and published on 26 July 2022 on the MongaBay website: