JAKARTA — Newly published research has linked the spread of oil palm and rubber plantations across a wetland area of Indonesia’s Sumatra Island to worsening floods in the region.

The analysis, published in August in the journal Ecology and Society, shows that “the observed and measured increase in flood frequency and intensity within the Tembesi River catchment area is most likely driven by land-use change from forests to monoculture plantations.”

“The large-scale land-use change leads to a compaction of the soil, so that less rain is absorbed by the soil and the water quickly runs off at the surface,” study co-author Christian Stiegler, from the University of Göttingen in Germany, said in a statement. “In particular, the advancing destruction of floodplains plays an important role in this process.”

The Tembesi River is located in the province of Jambi, where nearly 800,000 hectares (2 million acres) of forest — an area three times the size of Luxembourg — was cleared between 1990 and 2013. Much of that land was turned into oil palm or rubber plantations. 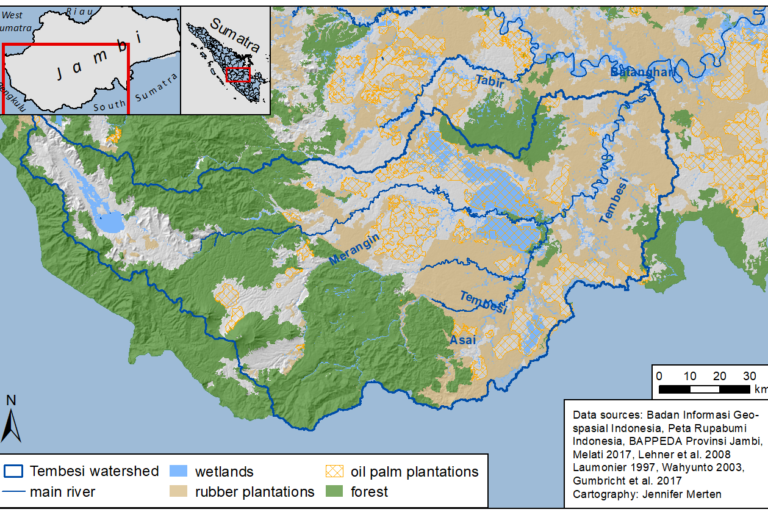 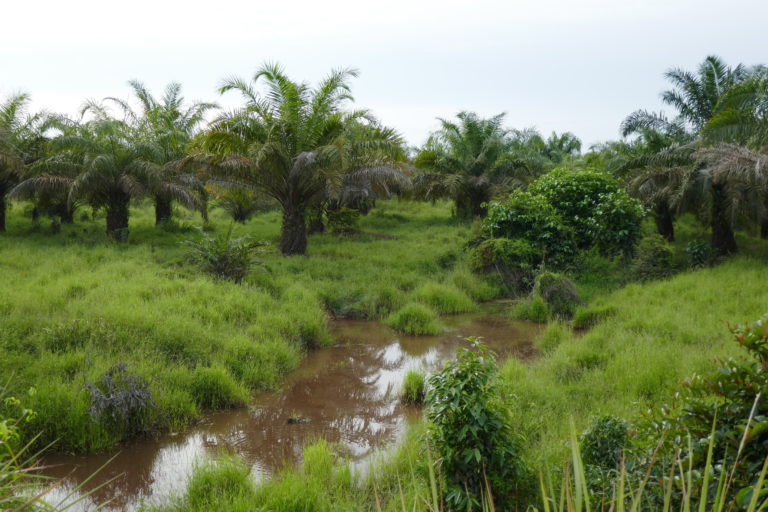 Across Indonesia, worsening flash floods have often been attributed by residents and authorities to land-use change and environmental degradation.

This new study takes a multidisciplinary approach in looking at the problem. The researchers — from the University of Göttingen, the Bogor Institute of Agriculture (IPB) in Indonesia, and the Indonesian national weather agency, or BMKG — conducted field surveys, data analysis, and interviews with small farmers, villagers, and decision-makers in Jambi. The interviews and fieldwork took place between 2012 and 2017, and the data for their analyses covered the period 1990-2019.

“Many studies on the relationship between land-use changes and flooding are only based on analyses by individual disciplines and thus provide only fragmentary insights into the underlying process,” lead author Jennifer Merten, from the University of Göttingen, said in the statement. “It was therefore important for us to use the widest possible range of data from different disciplines and also to include observations from the local population.”

“These results indicate that after a rainfall event, rubber and oil palm plantations are more prone to flooding than forests,” Stiegler told Mongabay in an email.

With the available data showing few shifts in rainfall distribution or volume between the wet and dry seasons, the researchers concluded the increase in flood occurrence was associated with higher soil compaction in these plantations after land-use change.

“Soil compaction may be caused by heavy vehicles or the fact the loose topsoil material is lost through erosion,” co-author Nina Hennings, also from the University of Göttingen, told Mongabay in an email.

“Soil compaction favors higher surface run-off because water can infiltrate into the soil only slowly,” she added. 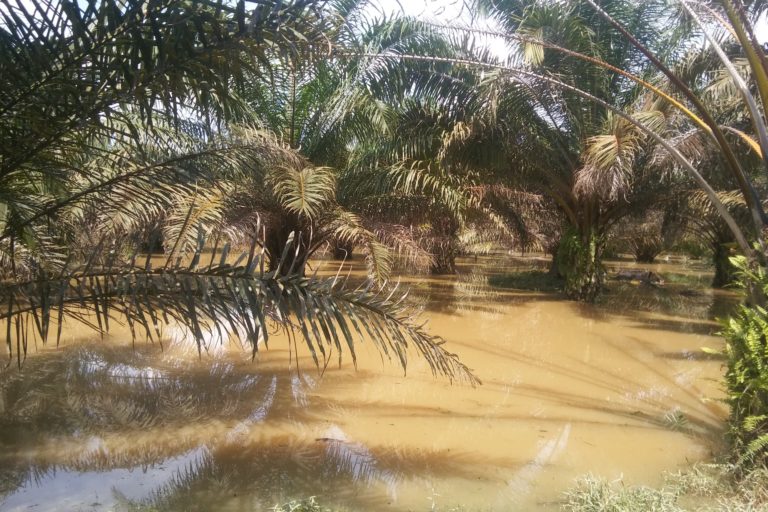 From their interviews and field surveys, the researchers found that flood control infrastructure built by plantation companies to manage wetland areas were blamed by residents for channeling runoff to their areas. This observed increase in flooding has led to new social tensions and conflicts, they said. “In consequence, villagers tried to protest against the building of such dams by writing letters to local authorities or organizing roadblocks. Yet, they were not successful in stopping such constructions at the time of research,” the study says. The increased frequency and intensity of flooding due to these land-use changes have also posed several challenges to the way locals cope with the flooding, according to Merten. She said large-scale oil palm plantations and villages for migrant workers brought over from other parts of Indonesia have been established in wetland areas prone to prolonged flooding, subsequently increasing many people’s vulnerability to flooding as they depend economically on the plantations.“As our interview partners have described, flood events have become difficult to predict and the severity of flooding on their plantations has increased over time,” Merten told Mongabay. “Together, both developments cause flooding to be a larger problem than it has been in the past.”The researchers suggest that soil protection and improved land-use planning are crucial in reducing the impact of land-use change in flooding. They also experimented with planting multiple tree species in an existing oil palm plantation, and found that the resultant water infiltration was significantly higher just four years after planting.“This suggests that the presence of trees [other than oil palms] and forest regrowth affects soil properties in a way that can reduce runoff and thereby buffer flooding, compared to oil palm monocultures,” co-author Clara Zemp, from the University of Göttingen, told Mongabay in an email. She added, “We can reverse this trend.”

Original article published by Basten Gokkon on 11 September 2020 on MongaBay: https://news.mongabay.com/2020/09/oil-palm-plantations-in-sumatran-wetland-worsen-flooding-in-communities/Republished with permission.