- Deforestation in the tropics, mostly caused by agriculture, is driving an increased rate of pathogen spillover from wildlife to humans.

- Tropical deforestation is affecting not only the health of plants and animals that depend on the forest directly, but also of people worldwide through increased disease transmission, loss of ecosystem services, and accelerated climate change.

- The majority of global forest loss is caused by just four commodities — beef, soy, palm oil, and wood products — so the demand and incentives for these products needs to be addressed.

- Slowing deforestation will require major reforms of global agricultural and financial systems, as well as policies and commitments directly aimed at conserving ecosystems.

Over the past century, researchers have discovered an average of two novel viruses per year with the ability to infect humans. Many of these viruses come from animals, and as more forests are lost, that number is on the rise.

Deforestation in the tropics, mostly caused by agriculture, is driving an increased rate of pathogen spillover from wildlife to humans, researchers from Emory University, the Zoological Society of London, Princeton University, and the University of Chicago say in a letter to the editor of Global Change Biology.
As forests are destroyed and fragmented, wildlife is forced into closer, more frequent, and novel contact with humans. This increased contact, especially with animals whose health and behavior have been altered by human pressures, means a greater risk of zoonotic diseases spilling over from animals to humans — a lesson driven home by the COVID-19 pandemic.

“The COVID‐19 pandemic has forced us to recognize the linkages between our health, the environment, and financial and agricultural systems,” the letter says. “Protecting and promoting tropical forests is one of the most immediate steps we can take to simultaneously mitigate climate change while reducing the risk of future pandemics.”

Tropical deforestation is affecting not only the health of plants and animals that depend on the forest directly, but also of people worldwide through increased disease transmission, loss of ecosystem services, and accelerated climate change.

A recent analysis found that cutting deforestation levels by half would not only be a cost-effective way to reduce the risk of pathogen spillover but would contribute nearly $4 billion per year in reduced greenhouse gas emissions. 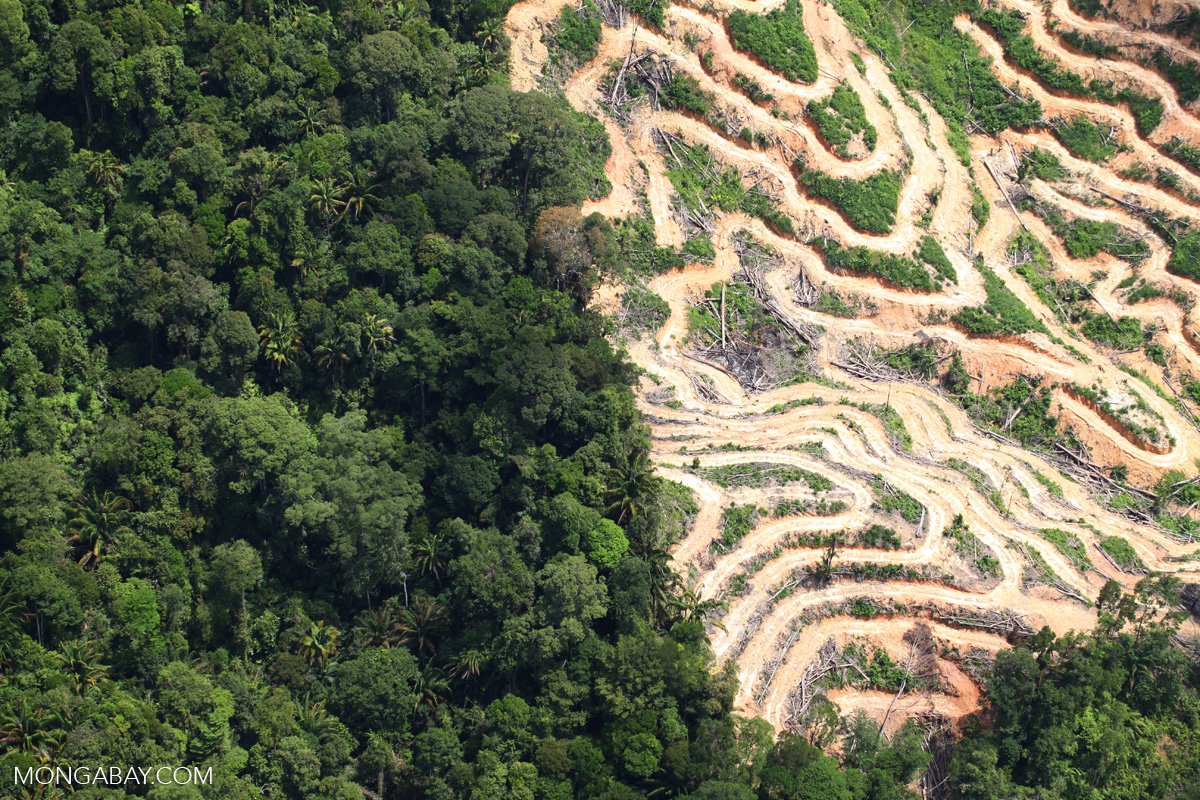 Image Above: Deforestation in Borneo. Image by Rhett A. Butler/Mongabay.

Over the past half-century, the human population has more than doubled, and most people now live in urban rather than rural areas. Yet despite our urban concentrations, human activities still impact at least 75% of Earth’s land surface. Feeding these billions of urban dwellers takes one of the largest tolls.

“The major causes of biodiversity declines and extinctions — habitat loss and fragmentation, and over-exploitation — are driven largely by demand for food,” David Tilman from the University of Minnesota, U.S., and David R Williams from the University of Leeds, U.K., wrote in The Royal Society. “The global food system is the single greatest user of Earth’s biodiversity and poses the single greatest threat to that biodiversity.”

As farming and ranching take up more and more land, wildlife is pushed into more fragmented and degraded forest habitats. The increased interface between humans and animals and poor habitat quality can push animals to behave in new ways to access food and resources, facilitating pathogen spillover from wildlife to humans.

“Irrespective of whether humans are going into forest areas or animals are coming to human settlements due to deforestation, viruses are being exchanged,” Rajan Patil, associate professor of epidemiology at SRM University, Chennai, India, said in an interview with Mongabay. “Usually in undisturbed habitats, viruses keep circulating in mild forms in animals. It is when this equilibrium is disturbed and they come in contact with humans, some cross the species barrier due to a mutation, and human infections start taking place.”

“The mapping of forest cover changes in the areas of recent epidemics is compelling and horrifying,” Stuart Pimm, a professor of conservation at Duke University told Mongabay in an email. “It makes a strong case for the need to slow deforestation in these areas.”

The majority of global forest loss is caused by just four commodities: beef, soy, palm oil, and wood products. That’s why it’s important that the demand and incentives for these products be addressed, says Thomas Gillespie, a professor at Emory University, U.S., and the lead author of the letter to the editor.
Establishing businesses in these sectors often requires subsidies, incentives, and/or substantial financing, so incorporating sustainability commitments and properly assessing the risks of projects upfront in the financing stage could go a long way to address the problem. Seeking out alternatives to these products, and divesting from corporations engaged in deforestation are steps for consumers to take to put on the pressure.

“Despite the largely decentralized nature of our global economy, a relatively small number of institutions manage the majority of financial resources,” Gillespie told Mongabay in an email. “The central role of these institutions as financiers provides an opportunity to turn around environmentally destructive practices and drive-up sustainability standards across the supply chain.” 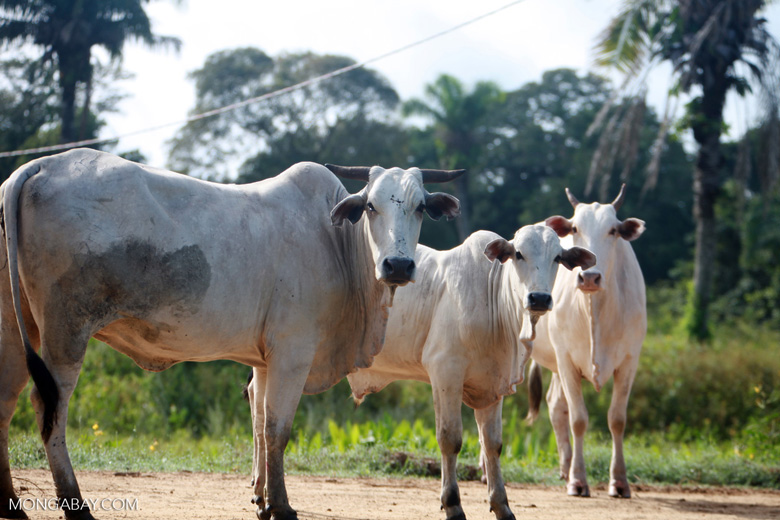 Image Above: Cattle ranching is the primary cause of deforestation in the Brazilian Amazon today, with much of the meat exported. Humanity’s hunger for beef has resulted in large areas of the Amazon rainforest and the Cerrado savanna being converted to cattle pasture, land use which makes for a very poor carbon sink. Photo by Rhett A. Butler.

Slowing deforestation will require major reforms of global agricultural and financial systems, as well as policies and commitments directly aimed at conserving ecosystems.

Recent commitments by heads of state to protect 30% of the planet by 2030 are promising measures, but choosing what land to protect matters. The real win-win for both preventing future pandemics and slowing climate change may lie in conserving existing tropical forests, Gillespie says, but key countries that contain biodiversity hotspots, such as Brazil, Indonesia and Malaysia, have not yet committed to the 30% goal.

Governments elsewhere, including in New Zealand, Scotland and Iceland, are moving to prioritize human and planetary health over GDP. Norway’s $1.2 trillion Government Pension Fund, the world’s largest sovereign wealth fund, has divested from 32 companies involved in unsustainable palm oil production, a major cause of deforestation in Southeast Asia and beyond.

“These kinds of initiatives are leading the way,” Gillespie said, “but success in this undertaking will require truly transformative change with unification of health and environmental policy and greater connectivity of policy initiatives from local to global.

“The pandemic has led to reflection on the personal, national and global levels,” he added. “It’s in moments like this that real change can happen. The key is ensuring that this crisis catalyzes societal and environmental solutions instead of reinforcing entrenched irrationality. We must capitalize on this moment of global clarity; the forests and our collective future depends on it!”