- A secretive Indonesian company group, Alas Kusuma, has allegedly cleared orangutan habitat in Indonesian Borneo, according to a new report by the NGO Aidenvironment.

- The company is the second-largest deforester in Indonesia’s pulp and paper sector, according to the report, which links it to the clearing of 6,000 hectares (14,800 acres) of forest from 2016 to 2021.
- Little is known about the company, but it has business links to Japanese companies and is certified by the Forest Stewardship Council (FSC)

JAKARTA — An Indonesian company with ties to Japanese conglomerates has cleared large swaths of rainforests, including habitat for critically endangered orangutans, according to a report.

The company, Alas Kusuma, allegedly cleared 6,000 hectares (14,800 acres) of forest between 2016 and March 2021 through its logging subsidiary, PT Mayawana Persada, in the western part of Indonesian Borneo, the research consultancy Aidenvironment said in its report.

An orangutan population and habitat viability assessment conducted by an expert group of scientists in 2016 identified most of the cleared area as orangutan habitat.

Mayawana Persada has denied the allegation.

“There’s no deforestation activity in orangutan’s habitat by PT Mayawana Persada,” the company told Mongabay in an email. “This can be seen from the company’s working map and the company’s activities on the ground, which have taken into account the results of studies on orangutan and high conservation values areas.”

Mayawana Persada said the studies were done by a consultancy called Ecology and Conservation Center for Tropical Studies (Ecositrop).

“The studies were to minimize the impact of the industrial forest plantation on the orangutan population in PT Mayawana Persada’s concession,” the company said.

Aidenvironment, however, said little information is available on any conservation efforts, and the group also appears to lack a “no deforestation, no peat and no exploitation” (NDPE) policy.

Mayawana Persada said it complies with Indonesian laws and regulations in managing its concession.

“So far, PT Mayawana Persada has never committed any violation or received complaints from the government on these issues [of deforestation],” the company said. 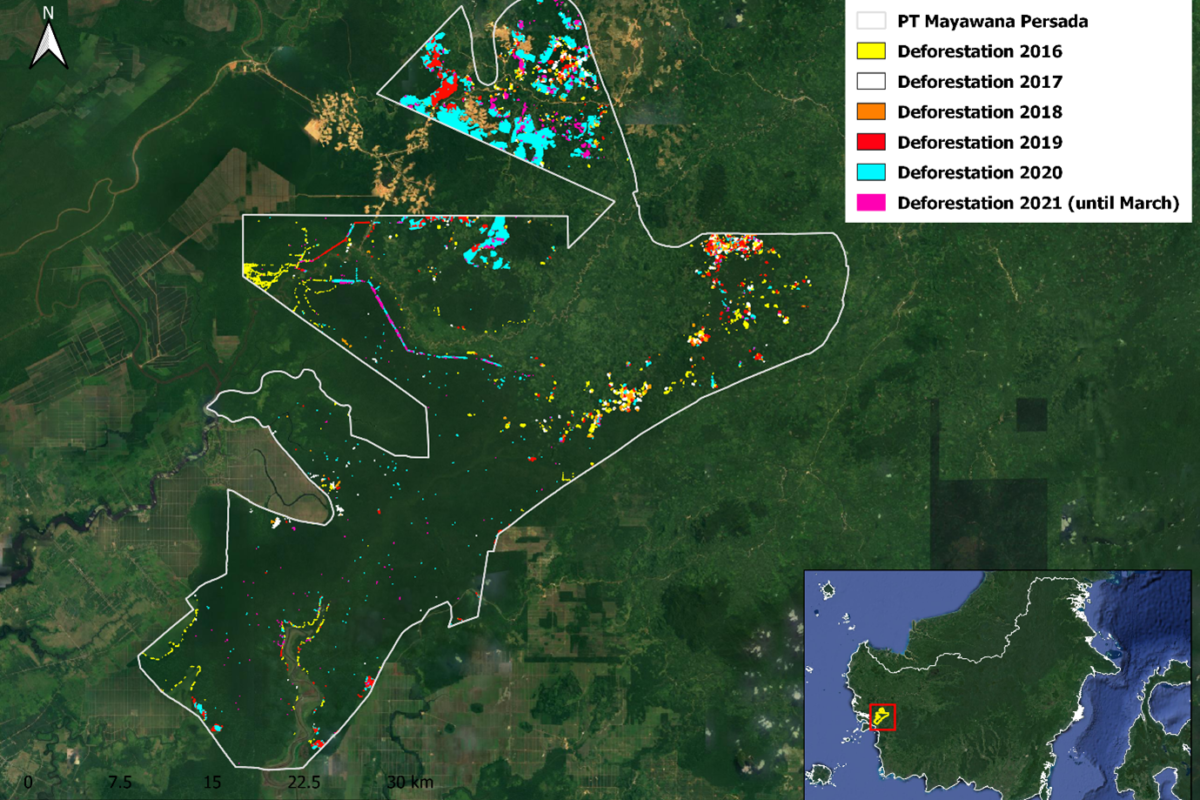 Concession and forest cover maps of PT Mayawana Persada by Indonesia’s Ministry of Environment and Forestry.

Aidenvironment also called out Alas Kusuma, which has logging, industrial tree and oil palm concessions, for its lack of transparency.

“Despite being the second-largest deforester for pulp and paper in 2020, researching Alas Kusuma has been challenging because so little is known about the company,” Aidenvironment Asia program director Chris Wiggs told Mongabay.

In the latest SPOTT assessment, which evaluates transparency among commodities companies, Alas Kusuma came away with a low score of 10.6%.

“It doesn’t have a website or any kind of public sustainability policy,” Wiggs said. “And the general lack of transparency over its operations has made it hard to identify its supply chains, especially in the palm oil sector.”

Despite the secrecy, Aidenvironment was able to identify Alas Kusuma’s trade partners. The group is best known for its plywood business, with most of it exports going to Japanese companies Sumitomo Forestry (10,500 tons) and ITOCHU Corporation (9,200 tons) during the first nine months of 2020, according to Indonesian trade data.

Responding to the report, Sumitomo Forestry confirmed that it purchased 10,500 tons of plywood from Alas Kusuma in 2020.

“However, at the Alas Kusuma manufacturing site that we purchase the plywood from, logs are only from the two logging concessions that hold FSC FM certifications: PT Sari Bumi Kusuma and PT Suka Jaya Makmur,” Yuuko Iizuka, the general manager at Sumitomo Forestry’s sustainability department, told Mongabay.

Of the plywood that it sourced from Alas Kusuma, about 70% is FSC certified, she added.

“And while the rest are not sold as FSC products, the raw materials are from FSC FM certified concessions and this is in line with our procurement policy,” Iizuka added.

The FSC has been criticized in the past for allowing certified companies to continue engaging in deforestation and human rights abuses. In Indonesia, several plywood suppliers, such as Hardaya, are currently FSC certified, and yet Aidenvironment detected deforestation in their operations between 2016 and 2020.

Sumitomo Forestry was also criticized in 2018 for indirectly purchasing plywood from a plantation company, PT Tunas Alam Nusantara, which had cleared an orangutan habitat in East Kalimantan province.

Iizuka said Sumitomo Forestry had introduced the goal to not procure timber and wood products that contribute to deforestation in 2019, with one of the initiatives being to remove so-called “conversion timber” from its supply chain. (Conversion timber is the old-growth wood cleared by plantation companies, typically palm oil growers, ahead of cultivation. More common sources of timber are trees that are planted specifically to be logged, usually acacia and eucalyptus.)

“And we trade according to our internal procurement guideline by conducting rigorous due diligence to ensure that the procurement is performed in a sustainable manner with consideration of legal compliance, human rights, labor practices, biodiversity conservation, and local communities,” Iizuka said.

Alas Kusuma also has a significant footprint in the palm oil industry, with an estimated 12,400 hectares (30,600 acres) of planted oil palms. Its palm oil business in West Kalimantan has been linked to deforestation through reports by Greenpeace in 2015 and Aidenvironment and Mighty Earth in 2018 and 2020.

It’s also possible the palm fruit grown and harvested on this deforested land ended up in the supply chains of Indonesia’s main palm oil refiners, as it’s not known which palm oil mills buy from Alas Kusuma, according to Aidenvironment.

“The findings on Alas Kusuma show the need for main companies to adopt cross-commodity NDPE policies, as business partners in one sector may continue their deforestation in another sector,” the NGO said.

Aidenvironment’s Wiggs said he’s surprised that a company with such a significant landbank like Alas Kusuma and a footprint in two of the most high-profile agricultural sectors, plywood and palm oil, hasn’t faced more scrutiny, especially as it has FSC certificates and links with Japanese companies.

“It shows how some companies in Indonesia still operate under little surveillance and how important it is to continue to monitor these agricultural sectors,” he said.

Article posted by Hans Nicholas Jong on 17 May, 2021 on Mongabay:
https://news.mongabay.com/2021/05/fsc-certified-logger-alas-kusuma-deforestation-orangutan-habitat-kalimantan/
Republished with permission.