The popular image of an orangutan is of a serene loner - quiet, calm, mysterious, and difficult to see from the ground as it moves, alone, through the forest canopy. While this image is somewhat accurate and the orangutan does appear quieter than its more gregarious ape cousins, the gorillas, chimpanzees, bonobos, and gibbons, it has a surprisingly varied vocal repertoire. Orangutan vocalizations can vary based on geography as well as differences in size, development, and acoustic structure, indicating a form of language in orangutan society and cultural variations between populations. 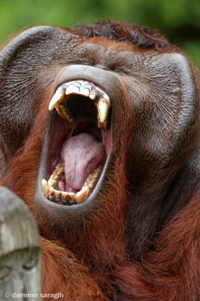 The most famous and distinct of the orangutan vocalizations is the long call. Emitted by male orangutans that are showing the secondary sexual characteristics of maturity, known as flanged males, the call usually begins softly with a series of ‘bubbly’ grumbles, before increasing in intensity to form a long sequence of bark-like pulses or roars, ending with a long series of sighs. The call is the loudest acoustic signal in the orangutan vocal repertoire, and although variations occur from male to male, it is produced several times a day, with each call lasting between 15 seconds and 4 minutes. The call is enhanced by the male’s cheekpads, which are believed to help project the sound forward, and their large hollow air sac, called laryngeal chambers, which act as resonators and help carry the sound as far as a kilometer away (Delgado et al, 2009; Hardus et al, 2009).

The complete function of the long call is difficult to determine, but its main function appears to be as both a spacing mechanism and mating strategy (Delgado et al, 2009). Orangutans live in large, heavily overlapping home ranges, where visibility is limited in the dense rainforest canopy, and long distance vocalizations play an important role in regulating relationships and interactions. By producing a powerful long call, the flanged males advertise their presence to other males in the area, and males respond differently to these calls depending on their relative status of dominance. Studies in Sumatra have shown that the dominant flanged male in any area is the orangutan most likely to approach other long calls, whereas lower ranked males tend to move away from other long calls (Delgado et al, 2009; Utami et al, 2009a). Experimental playbacks of recorded long calls at Kutai National Park in Borneo confirm this, with low ranking flanged males and unflanged males avoiding calls by the highest-ranking male (Mitani, 1985). Research in Malaysian Borneo has also revealed flanged males produce long calls more often along the periphery their range, and when disturbed by potential rivals (Utami et al., 2009a).

The male long call also acts a mate attraction function. Flanged males produce more long calls when not in association with females, and research has shown that females, regardless of their reproductive status, either approach these calls or coordinate their ranging pattern with the locally dominant flanged male. Current data for the role of long calls as a female attraction function are more extensive for study sites in Sumatra, where research has shown that females selectively approach after long calls by the current dominant male, rather than those of non-dominant males, and spend 90% of their time in earshot of the dominant flanged male, as opposed to the 70% of their time spent in audible range of lesser status flanged males (Delgado et al, 2009). Long-term studies in Borneo have also provided examples of females running to flanged males when threatened by unflanged males, indicating again that, not only does the long call function as a female attraction and guarding strategy, but that orangutans are able to determine the identity and status of flanged males based on their long call (Delgado et al, 2009; Utami et al., 2009b).

In addition to the long call, orangutans display a wide variety of other vocalizations, from middle range calls and grumbles to kiss squeaks and raspberry sounds. The documented number of vocalizations could be as high as 32, although this is difficult to confirm because orangutan vocalizations tend to be employed in short distance communication during largely infrequent social interactions, and are difficult to hear by human observers on the ground. Additionally, much of the focus on sound repertoire recently has focused on the complexities of the long call, so other vocal types have been neglected. However, studies do suggest variations in vocal repertoire displayed at each site, and these differences have been interpreted as evidence of culture in different orangutan populations (Hardus et. al., 2009).

Other notable orangutan vocalizations include: