- The Indonesian government says it will need to establish new oil palm plantations a fifth the size of Borneo in order to supply its ambitious biodiesel program.

- The program, through which Indonesia plans to eventually phase out the use of conventional diesel, will require planting 15 million hectares (37 million acres) of oil palms, according to the energy minister.

- Energy and environmental experts say it’s inevitable that massive swaths of forest will have to be cleared to meet this target, and have called for it to be scaled back.

- They also question the drive to ramp up the biodiesel program, given that Indonesia has expressed its ambitions to be a global production hub for electric vehicles — which don’t run on diesel, whether conventional or bio.

JAKARTA — An Indonesian government program to phase out diesel for an alternative made from palm oil could spur massive deforestation for palm plantations spanning an area a fifth the size of Borneo.

The biodiesel transition program, the world’s most ambitious, will require 15 million hectares (37 million acres) of new oil palm plantations, according to Arifin Tasrif, the minister for energy and mines. Speaking at a parliamentary hearing last month, he said that was how much new palm oil production would be needed to replace current oil consumption of a million barrels a day.

A newly published study puts the figure of new plantations to supply the program at 9.3 million hectares (23 million acres). Although this is a lower projection than the ministry’s, it still represents an area two-thirds the size of Indonesia’s Java Island.

The program is meant to both ease Indonesia’s dependence on crude oil imports and make the shift to so-called biofuel, which the government touts as a cleaner alternative to conventional fossil-fuel diesel. The government is rolling out the program in stages, blending progressively higher concentrations of palm oil-derived biodiesel into conventional diesel. The program is currently at the B30 stage, which means the diesel sold at the pump contains a 30% blend of palm oil-derived biodiesel. It’s expected to reach the B50 stage, a 50:50 blend, by 2025.

But to do that, the total planted area of oil palms will have to be at least 22.7 million hectares (56 million acres), according to the new study by the University of Indonesia’s Institute for Economic and Social Research (LPEM UI).

“That’s only to meet the need [for palm oil-derived biofuel] until 2025,” said Alin Halimatussadiah, the LPEM UI head. “That’s why there needs to be serious mitigation to hold back land expansion.”

If the government were to maintain the program at B30 through 2025, or even lower the blend to B20, the need for new oil palm plantations wouldn’t be as great — 338,880 to 5.25 million hectares (837,400 to 13 million acres) — but would still entail a significant amount of deforestation.

Another study, by Traction Asia, warns that the low productivity of existing plantations and ambitious target of the biodiesel program could see demand outstrip supply by 2023. Traction Asia researchers attribute this gap to the government’s failure to account for the inefficiency of oil palm plantations when setting its biodiesel targets. They note that, despite Indonesia being the world’s biggest producer of palm oil, its plantations have lower yields than those in Malaysia, the No. 2 producer.

“Unfortunately, the government only focuses on setting the target with no clear road map,” said Traction Asia research manager Ricky Amukti. “This will create a deficit. This biodiesel program was initially created to absorb excess crude palm oil production, but unfortunately it has become a boomerang as the [biodiesel blend] target kept being increased. What was initially an oversupply will become a deficit.” 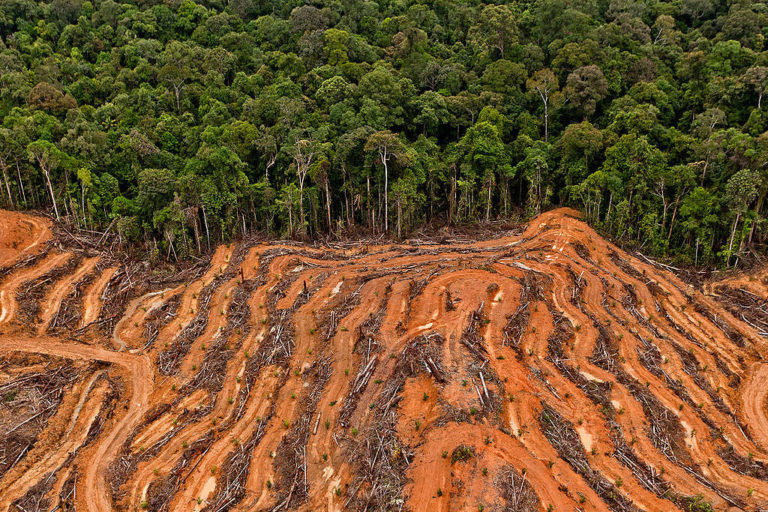 The government has long sought to boost plantations’ productivity through a replanting program, replacing aging oil palms with higher-yielding varieties. But the replanting program has consistently fallen short of its targets.

At this rate, Ricky said, it would be more feasible for the government to abandon the replanting program and start establishing new plantations with the higher-yield trees — a move that would threaten the country’s remaining carbon-rich rainforests.

“Even if we keep replanting [existing plantations], we need a total of 3.8 million hectares [9.4 million acres],” he said. “If we don’t, there’s a likelihood for land conversion. If that’s the case, then biodiesel will be much less friendly to the environment than diesel-based on its emission that we count from the life-cycle analysis.”

“The biodiesel program needs lands for new oil palm plantations which could lead to massive deforestation,” he said. “The biodiesel program is clearly not a solution for the country’s fiscal state and will worsen the implementation of Indonesia’s climate commitment because it is oriented toward deforestation and new land clearing in forest areas. That’s why it’s very wrong if biodiesel is categorized as a renewable energy.”

A key reason the replanting program has fallen short is because its funding, raised through mandatory export tariffs slapped on palm oil companies, has largely gone toward subsidizing biodiesel production and sales, to make the fuel more competitive with conventional diesel.

The export tariffs are collected by the state palm oil fund, known by its Indonesian acronym BPDP-KS. Since its establishment in 2015 until 2019, the fund collected 47.2 trillion rupiah ($3.3 billion) in revenue, and gave 71% of it back to biodiesel producers — and less than 5% to small farmers for the replanting program.

The crash in oil prices earlier this year forced the government to allocate a $195 million stimulus for the biodiesel program from the state budget. The money will go toward subsidizing biodiesel prices at the pump. The total needed to keep the biodiesel program afloat is $250 million. The balance of about $55 million will come from biodiesel producers through an increase in export tariffs, effective May 1 next year.

LPEM UI estimates the figure will balloon to $60 billion if the government increases the biodiesel blend to 50%. 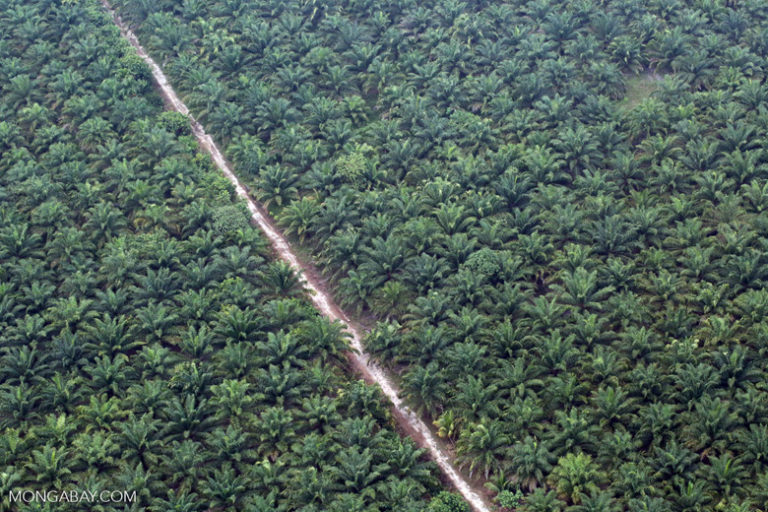 An oil palm plantation in Indonesia. Image by Rhett A. Butler/Mongabay.

Sigit Hargiyanto, the head of the biofuel department at the energy ministry, played down concerns that the biodiesel program would run out of palm oil. He said the government expected palm oil exports to decline in the coming years, allowing for greater domestic supply of the commodity, including for the biodiesel program.

Sigit said there was a smear campaign underway against palm oil in the European Union and the U.S., two of Indonesia’s biggest export markets. “If we don’t export [palm oil] to them, then we can just use it for ourselves,” he said.

He also said deforestation fears were overblown, given that the palm oil used in biodiesel production must be certified sustainable, and that there’s a moratorium currently in place on issuing permits for new plantations. That moratorium,  imposed by President Joko Widodo in September 2018, is due to expire in September 2021.

“So in my opinion, it can be guaranteed that the palm oil produced to become fuel [is sustainable] because it has to go through the [certification] procedure,” Sigit said.

Traction Asia’s Ricky said that while it’s true palm oil exports might decline or be capped, consumption of palm oil for food and consumer products is expected to keep growing, and thus the risk of a deficit is still there. He also noted that sustainability standards are routinely flouted within the palm oil industry in Indonesia due to a lack of transparency and traceability. That’s something the government must address to ensure truly sustainable palm oil production, he said.

“We’re not against biodiesel, but we don’t agree with biodiesel that’s not sustainable, not transparent and not traceable,” Ricky said. “Can [we] say which land the current biodiesel get its palm oil from? If this can be answered, I’m sure there’s not going to be a debate.”

He said it would ultimately be better for the government to scale back its ambitious biodiesel target to give itself time to improve productivity and sustainability in the industry.

“There’s no need to be shy” about reducing the target, Ricky said. “Move one step back, and then fix the management, raw material and production. If it’s too high, such as B40 or even B100, then it’s going to be difficult to fix [the industry].”

Ricky also suggested the government broaden its focus to developing and scaling up other forms of renewable energy. He also pointed to President Widodo’s recent courting of electric vehicle maker Tesla, in which he advertised Indonesia, with its rich deposits of nickel, as a potential global hub for the production of electric vehicles.

“The potential for renewable energy in Indonesia is not only from biodiesel, but also solar and wind,” Ricky said. “If all the focus is on biodiesel, then that’s a pity. Especially since the government says it wants to develop electric vehicles. Once these vehicles are being developed, what use will the biodiesel be?”

Article posted by Hans Nicholas Jong on 21 December, 2020 on Mongabay: