Due to the illegal wildlife trade and the rate of deforestation in Indonesia and Malaysia over the last 40 years, there's been an alarming increase in captive orangutans - in zoos, wildlife parks, wildlife markets, and private homes, both domestically and internationally. As a result, conservation organizations are increasing efforts to rescue, rehabilitate, and release these orangutans. Ex-captive, wild-born orphans now represent a significant proportion of the surviving orangutan population.

Orangutan rehabilitation is complex and fraught with difficulties. It's currently one of the most controversial and hotly-debated aspects of orangutan conservation.

The first orangutan rehabilitation project began in the Malaysian state of Sarawak in the 1960s and was followed soon after by similar projects in Sabah in Malaysia, and Sumatra and Kalimantan in Indonesia. The project at Tanjung Puting National Park in Central Kalimantan is arguably the most famous. At the time, little was known about the status of wild orangutans, the size of the remaining populations, and even their life histories and ranges. Because wild studies were in their infancy, rehabilitation methods were largely experimental. 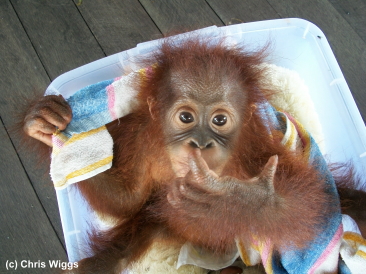 Our partner the Sumatran Orangutan Conservation Program (SOCP) has run the world’s only Sumatran orangutan rehabilitation and release project since 2001. To date, it has cared for nearly 400 orangutans, releasing more than 180 of them back into the wild.

Although different project founders had their own motivations for establishing each program, they were usually initially set up to help enforce orangutan protection laws by providing legal holding facilities for confiscated orangutans, and, from an animal welfare perspective, giving orangutans confiscated from often appalling conditions a chance to once again live independently in the forest (Frey, 1978). Due to uncertainty over the number of orangutans living in the wild, rehabilitation programs in the 1970s placed an emphasis on releasing orangutans into areas with existing wild orangutans, to supplement populations that were considered too small to be viable (Russon, 2009). For example, at Tanjung Puting, between 1971 and 1994, at least 180 orangutans were released and at Bohorok in Gunung Leuser National Park in Sumatra, 218 orangutans were released between 1973 and 2000 (Yeager, 1997).

Most orangutans in rehabilitation centers were confiscated by forestry department officials. Occasionally they're handed in by people unable to look after them. The time spent in captivity and the age upon arrival vary, but most are confiscated when they are young, with between 63-97% of intakes under seven years old (Russon, 2009).

The living conditions in captivity also vary, but inadequate care under poor conditions is the most prevalent, and physical damage often includes gunshot and machete wounds, broken or missing limbs, scars and wounds from chaining, paralysis, blindness, and internal damage. Confiscated orangutans have also usually suffered extreme behavioral and psychological damage, including prolonged periods of isolation, physical and sexual abuse and abnormal associations with humans (Ibid).

The behavioral abnormalities observed in ex-captive orangutans has been one of the most challenging aspects of the rehabilitation process, and has led to a divergence in the methods used, with some practitioners advocating limiting human contact severely, to try and remove learned human behaviors and encourage those seen in wild orangutans, while others believe orangutans, particularly infants and juveniles, should be assigned a human caregiver to teach them such behaviors, on account of the long period of dependence between a mother and infant in the wild. Regardless of the method used, almost all rehabilitation centers and release sites see abnormalities in released individuals. At Tanjung Puting, released orangutans occasionally attacked humans, others often reappeared at the release camp with deep wounds, indicating negative encounters with their wild counterparts, and others have been seen either ill or underweight (Yeager, 1997). Similar observations have been made at Bohorok in Gunung Leuser National Park (Dellatore et al., 2009). High infant mortality has also been observed in a number of release sites, indicating released ex-captive females lack the mothering skills of wild females (Russon, 2009). 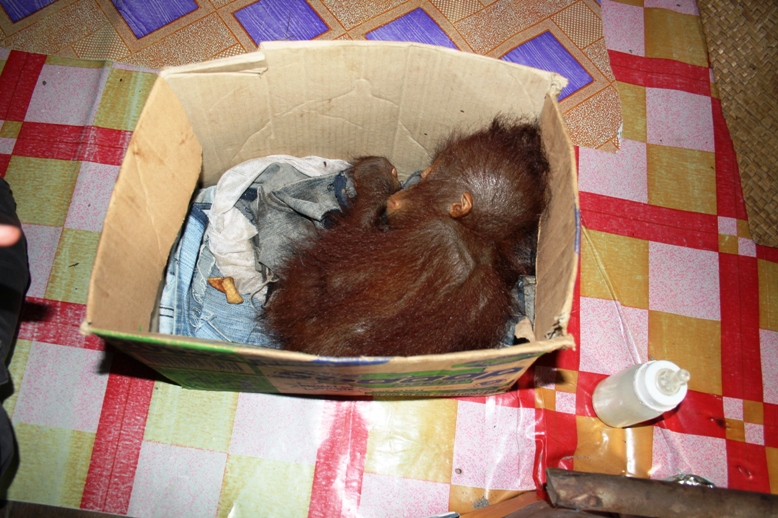 The prevalence of diseases in ex-captive orangutans and the risk of these diseases spreading to wild populations is also a major concern. Ex-captive orangutans often carry human diseases such as hepatitis-a/b/c, tuberculosis, tetanus, respiratory disease, poliomyelitis and significant parasite loads, and while diseases are usually identified during a screening and quarantine period, there's a danger of these potentially fatal diseases being spread to wild populations if undetected (Russon, 2009). This threat has been exacerbated in recent years by the flourishing tourist trade that has developed around the ex-captive orangutans. Tourism and the revenue it raises is an incredibly important conservation tool, providing jobs and income for local people and governments and a financial incentive for conserving wildlife. The large amounts of money tourists are willing to pay to see mountain gorillas in Central Arica is one of the main reasons for their continued conservation, and there's also a demand to see orangutans in the wild (Redmond, 2008). However, unlike gorillas, which live terrestrially in large family groups, wild orangutans live solitary lives high up in the dense forest canopy and are difficult to observe from the forest floor. 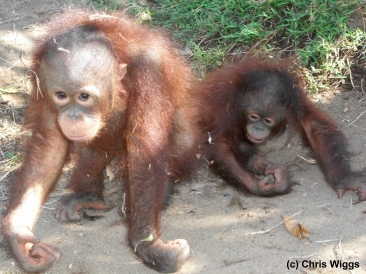 Ex-captive orangutans, however, tend to spend extended periods on the ground, are more gregarious than their wild counterparts, and, due to their captive backgrounds, are usually comfortable around humans. Sepilok in the Malaysian state of Sabah, Bohorok, and Tanjung Puting all allow tourists to visit the ex-captive orangutan release sites, and, at the latter two sites, humans have been observed soliciting contact with the orangutans. Studies have shown that primate populations in close proximity to humans have higher levels of parasitic infection than those that rarely come in to contact, and our genetic closeness to orangutans makes them highly susceptible to human diseases (Wallis & Lee, 1999). It is feared that if an ex-captive orangutans were to catch a disease from a human tourist, it could decimate the wild populations, who do not have any natural immunity to human diseases. Although the semi-solitary nature of wild orangutans would usually restrict disease transmission, released ex-captives are more gregarious and, lacking the social skills they would learn from their mother, have been seen observed at Tanjung Puting soliciting play with wild females and their offspring, and climbing in and out of wild female’s day nests, while respiratory and skin diseases have been seen to be transmitted between individuals (Galdikas, 1999; Yeager, 1997). 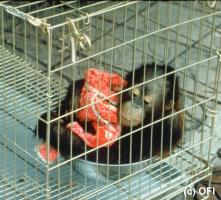 To mitigate these problems, and in recognition of the fact that, due to an acceleration in deforestation, ex-captives were likely stressing wild populations and competing with them for food, the Indonesian government passed a law in 1995 restricting the release of ex-captive orangutans into areas with a viable wild orangutan population, and aimed to restrict tourist activity at release sites. Today, although tourists can still visit the previously released ex-captives at Bohorok and Tanjung Puting, all confiscated orangutans are now quarantined and rehabilitated at specialist clinics, and released into areas devoid of wild orangutans, or areas without a viable wild population, and closed to tourists, although such sites in both Indonesia and Malaysia are becoming almost impossible to locate. Most release projects also provide ‘soft releases’ for orangutans, where provisions and other supports are offered for a short period after the initial release, and in some cases, indefinite supplementary feeding is provided. Post-release monitoring of ex-captives has historically been difficult, due to a combination of lack of funds, the tough terrain and the orangutans wide-ranging patterns, but is hoped that new developments in microchipping technology could aid with post-release monitoring, and preventative measures could be taken to improve post-release mortality and success rates (Russon, 2009).

Despite these difficulties and ongoing problems, orangutan rehabilitation has also brought huge benefits and remains an important part of orangutan conservation and animal welfare. Continued deforestation and the illegal wildlife trade have caused orangutans being kept in appalling conditions throughout Indonesia and Malaysia, and often in other parts of the world. The existence of rehabilitation centers and the knowledge they will accept rescued individuals has provided impetus to forestry department officials to confiscate illegally owned orangutans, and these centers, all given the support of international NGO’s, are an essential facet of law enforcement (Ibid). If rescue centers were not able to care for these ex-captives, they would likely die in captivity, in often appalling conditions; and while studies have shown that ex-captives have higher than average mortality and infant mortality rates (Russon, 2009; Yeager, 1997), it's also likely that a large number of those released into forests have survived and are living free, wild lives (Galdikas, 1999). Those orangutans not suitable for release are now often housed in sanctuary like enclosures in centers, where they enjoy a vastly improved quality of life, and at the Sumatran orangutan release site in the Bukit Tigapuluh landscape, a sanctuary for orangutans deemed unsuitable for rehabilitation has been developed in a semi-natural setting (Perth Zoo, 2009).

Rescue and rehabilitation projects are also important for the part they play in the relocation of wild orangutans from recently deforested areas to still forested areas, a process often referred to as translocation (Beck et. al., 2007). As the forest is cut down and orangutans are displaced, those that have been living independently in the forest, usually adults independent of their mothers, and have been captive for a just short period of time, often just a number of hours or days, can be relocated and released immediately into other areas of forest, without going through the rehabilitation process, limiting their exposure to human behaviors. Existing rescue and rehabilitation centers often provide the necessary logistical support and infrastructure to aid this work. 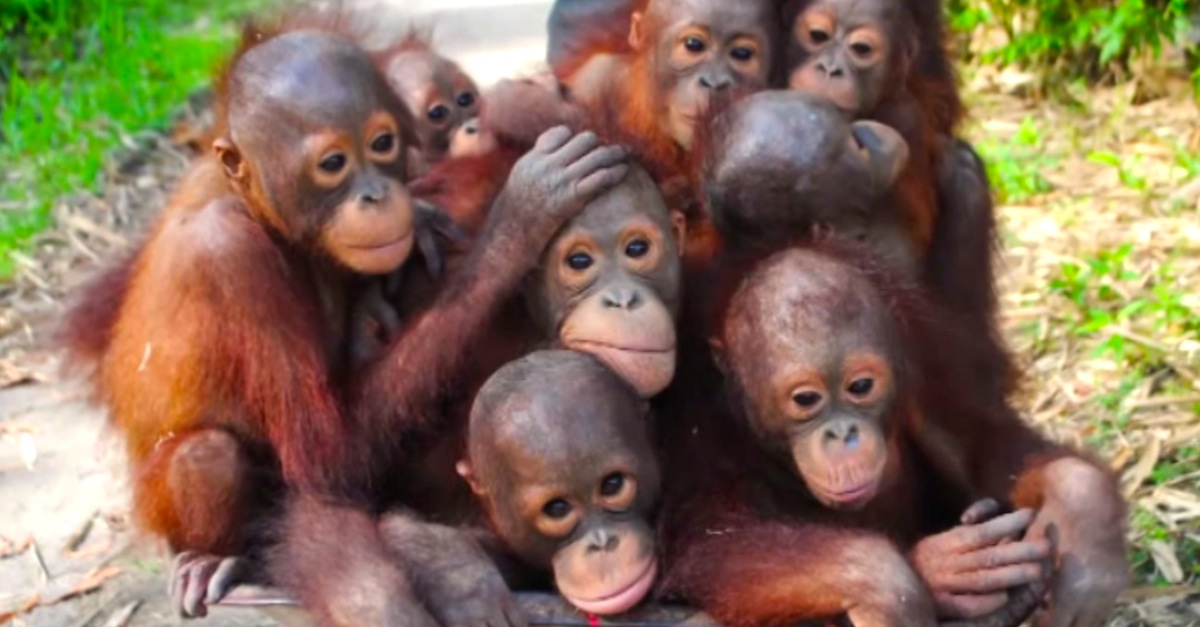 While the tourism industry brings with it complications, and the threat of humans infecting ex-captives and wild orangutans with human diseases remains an ever-present threat, it has also brought with it economic benefits, employment for local people and has helped create local, institutional and governmental support and commitment for orangutan conservation (Galdikas, 1999). These easily accessible ex-captive orangutans have also made viewing orangutans in the wild possible for large numbers of people, and remain charismatic representatives of their under-siege species.

There is also evidence that the presence ex-captive orangutan release sites have, in some cases, strengthened the case for conserving the rainforest. The fall of President Soeharto from power in May 1998 after 32 years of dictatorial rule plunged Indonesia into political chaos, and vast areas of forest throughout the country were logged with impunity. Tanjung Puting National Park was overrun with illegal loggers (EIA, 1999), but the area in the vicinity of the most high profile release site in the park, known as Camp Leakey, an area with extensive local support and a high international profile, was left largely undisturbed (OFI, 1999). Two former logging concessions in Central Kalimantan that were to be turned into a palm oil plantation are now known as the Lamandau River Wildlife Reserve, which acts as a government-designated orangutan release site, after lobbying by NGO’s in the area, and surveys are currently underway to locate suitable release sites in West Kalimantan. Worldwide media attention has recently been given to plans by a pulp and paper company to convert a portion of the Bukit Tigapuluh landscape in Sumatra into a plantation, with particular attention being paid to areas that act as a Sumatran orangutan release site, and the release of a zoo-born adult female from Perth Zoo into this area in 2006 has ensured support for its continued protection from the West Australian government (Russon, 2009).

In 2007, the Indonesia government formulated an action plan for orangutan conservation, and one of its objectives was the release of all ex-captive orangutans and the closure of all current orangutan rehabilitation centers in the country by 2015 (MoF, 2009). Continued forest conversion, the illegal pet trade, the significant number of ex-captives currently in overcrowded rehabilitation centers and the difficulty in finding and securing suitable release sites means this is perhaps an optimistic timeframe, but securing an independent future for these wild-born, ex-captive orangutans nevertheless remains a hugely important part of the wider conservation movement.