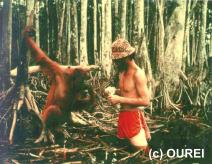 Language is an important part of being human. Many have long assumed (indeed, many still assume) that our use of language is one of the most important things that sets us apart as a species. But are human beings really unique in this regard?

In the last half-century, there has been a great deal of scientific curiosity regarding the ways in which the great apes are similar to human beings, and to what extent those similarities may be observed and studied. A number of studies have been conducted exploring the potential for orangutans, chimpanzees, gorillas, and bonobos to understand and utilize human language and symbols. The results have been impressive.

OURF President Gary Shapiro reports that early efforts to examine the language learning capabilities of great apes focused on the acquisition of vocal language. Attempts to teach vocal language to both chimpanzees and orangutans proved to be largely unsuccessful. In one study, a chimpanzee was trained for six years in a human cultural environment and was only able to produce four words. These were poorly vocalized and clearly difficult for the chimpanzee to reproduce. Various studies were conducted throughout the nineteenth century all with a similar lack of success. This was interpreted by some as evidence of humanity’s uniqueness in linguistic capability. However, as Shapiro points out, this “assumes that vocal speech is equivalent to linguistic competence. It can be argued similarly that the negative results of the experiments do not mean the apes have no competence for language per se, but only that vocal language is apparently not within the animals’ neurobiological capacity.” The fact that orangutans and other great apes have great difficulty acquiring and producing spoken vocabulary does not mean that they have no capacity to learn to communicate, but that they are suited to a different form of communication than humans (Shapiro, 1985).

Studies have shown that orangutans are naturally inclined to at least some level of gestural communication. Cartmill and Byrne were able to identify 64 gestures through extensive observation of 28 individual orangutans in three zoos. Of those 64 gestures, their analysis established “tight meanings” for 29. That is, those 29 gestures were used more or less consistently to convey a particular meaning. These meanings were very broad in nature (Affiliate/Play, Stop action, Share food/object, etc.), and do not appear to approach the specificity humans are familiar with in their own communication, (Cartmill and Byrne, 2010). That being said, this is already strong evidence that the orangutan capacity for language goes far beyond their vocal limitations.

Shapiro has been one of the pioneering researchers in the area of orangutan sign learning ability.  His research in this area began in 1973 at the Fresno city zoo, where his eighteen-month study of symbolic capability with an orangutan named Aazk became the basis of his master’s thesis.  Through her relationship with Shapiro, Aazk was able to learn to arrange symbols meaningfully on a board in order to build sentences (Thompson, 2010).  A few years later, Shapiro traveled to Borneo to conduct more extensive studies teaching sign language to orangutans in their native environment. 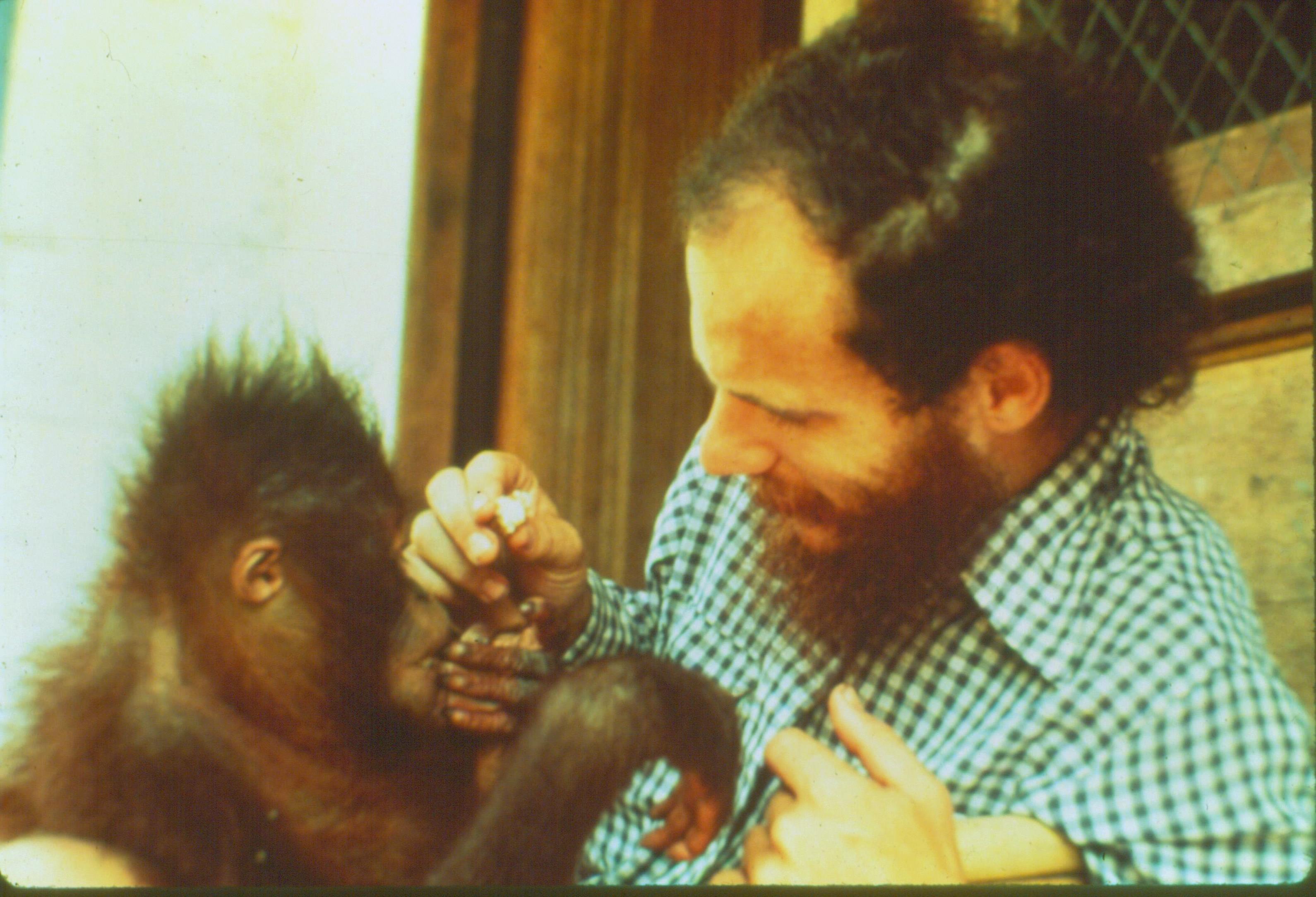 One of Shapiro’s more remarkable Bornean students was a juvenile orangutan named Princess. Princess developed a very strong attachment to Shapiro, selecting him to fill a parental role in their relationship. Shapiro likewise adopted Princess as his daughter and raised her himself for lack of an orangutan mother to take her in. This provided a unique setting for Princess’s training. She was raised by Shapiro in a home environment, but that home was in the middle of her native habitat, where she was permitted considerable freedom. Princess was taught a variety of Ameslan and modified Ameslan signs, and was able to acquire 37 signs over the course of 19 months of training, in a manner comparable to that of Washoe the chimpanzee and Koko the gorilla. In fact, Princess acquired vocabulary somewhat more quickly than her gorilla and chimpanzee counterparts, probably because she was older and more mature at the beginning of her training.

Following this, Shapiro conducted a more extensive study in 1985 involving Princess and three other orangutans, further documenting and comparing the species’ ability to communicate through sign language. The four subjects were chosen to represent a broad range of variables; two were male, two were female, two were caged, two were free-ranging, two right-handed, two left-handed. The subjects were trained in the use of ten signs, all of which referred to physical objects, over the course of a fifteen-month period.  At the end of this period, all of the orangutans had shown proficiency in at least some of the signs, with a wide range of variance between individual orangutans. The caged subjects in the study learned better than the uncaged ones, though Shapiro points out that this is most likely due to the caged male’s superior individual performance, rather than conclusive evidence that holding condition has a large effect on an orangutan’s learning ability.  Across the board, the orangutans seemed more interested to learn those signs that were related to food. This is not surprising since an orangutan in the wild spends a great deal of its time looking for its next meal. In addition to signs referring to food, the subjects appeared to have an easier time learning those signs which required them to touch a specific location on their body, as opposed to those in which the active hand performs some gesture in midair. This preference has also been observed in both gorillas and chimpanzees.

Further demonstrating the remarkable language learning abilities of Orangutans is an individual named Chantek (Miles, 1994; PBS, 2014), currently residing in a Zoo Atlanta orangutan habitat.  Beginning in 1978, Chantek was raised and taught to sign—beginning at the age of nine months—by anthropologist Lyn Miles at the University of Tennessee at Chatanooga.  In order to most fully explore Chantek’s capacity for human-like language and cognitive ability, he was raised as much like a human child as possible, fully immersed in the human cultural experience.  The results of this project were remarkable.  Over the course of eight years at the university, Chantek was able to produce more than one hundred and fifty signs, and recognize considerably more. He also developed a significant understanding of spoken English.  In addition, he was able to combine signs he knew into new signs to designate items not already in his vocabulary, calling ketchup “tomato-toothpaste,” and a cheeseburger “meat-cheese-bread.” Chantek is not alone among primates, or even among orangutans, in his ability to combine his vocabulary. During Shapiro’s studies, Princess also displayed this ability.

The special circumstances of Chantek’s upbringing and his extensive language skills give him a unique outlook on himself and the world.  When asked who he was, he has described himself as an “orangutan person.” By contrast, when asked about his fellow orangutans in the Atlanta zoo habitat, he described them as “orange dogs,” indicating that he conceives of himself as being in a different category than others of his species. Still more fascinating—though heartwrenching—was Chantek’s reaction to his confinement immediately after the university project was terminated. Chantek was returned to the Yerkes Primate Research Center.  At the center, he was confined to a small cage after having enjoyed a good quality of life and a high level of freedom at Chattanooga. Miles asked Chantek on one occasion how he was, to which he signed “hurt.” Asked to indicate the location of his injury, he responded “feelings.”  Any animal is likely to be visibly frustrated upon being caged after a period of freedom, but Chantek’s language skills give him an awareness of his own condition and an ability to express his emotions in ways that are not so clearly observable in any animal besides humans.

In addition to language, Chantek developed an interest in another symbolic system important to human culture: currency. Chantek was given a daily allowance of metal washers with which he could purchase certain treats. If he had “money,” he could pay some of it for a soda, or some other reward he found valuable. If he didn’t have money, he would ask for chores to do to earn some. He was even able to understand that if he saved up for several days, he could purchase more desirable rewards, such as a ride in the car to McDonald's, where he could pay for the highly valued “meat-cheese-bread.” Chantek’s extensive language skills, as well as his unique sense of self and his ability to grasp human cultural constructs like simple economics, provide a vivid illustration of just how similar the great apes are to human beings.

The general interest of the scientific community has shifted in recent decades. Language experiments like those of the 70s and 80s have taken a back seat to efforts more focused on orangutans living as naturally as possible. Studies are still being done. Zoo Atlanta, for example, conducts studies in language and cognitive abilities that heavily involve orangutan interaction with a computer located inside the exhibit. Something as aggressive as Chantek’s complete immersion in human culture is unlikely to be repeated in the current scientific climate. However, it continues to be seen that orangutans are immensely intelligent and have great communicative potential. What we have learned from these studies should profoundly impact the way in which we view orangutans, and, perhaps more so, the way in which we view ourselves.

- This article was written by Schuyler Lewis via VolunteerMatch.com.