All great apes have slow life histories, and the orangutan is no exception. In fact, it has the longest birth interval of any land mammal, with one of the longest periods of infant dependency (Galdikas, 1999).

An orangutan is born after a gestation period of around 9 months (usually between 260 to 270 days) and is in almost constant body contact with its mother for the first few months of its life. After 12 months an orangutan will begin to venture away from its mother, contact declining to around 50% at the time of its second birthday. However, this only refers to times when a mother is stationary in a tree, as an infant orangutan will still be carried from tree to tree on its mothers body until it is between 2 -4 years old, and even after this age, a female orangutan will still use her body as makeshift bridge for her offspring to climb across if the gap between trees is too wide. Studies in both Sumatra and Borneo have shown that an infant will spend more than 50% of its time within 10 meters of its mother until is at least 6 years of age, and in some areas will remain in the same tree as its mother until the age of 8 (van Noordwijk et al, 2009). 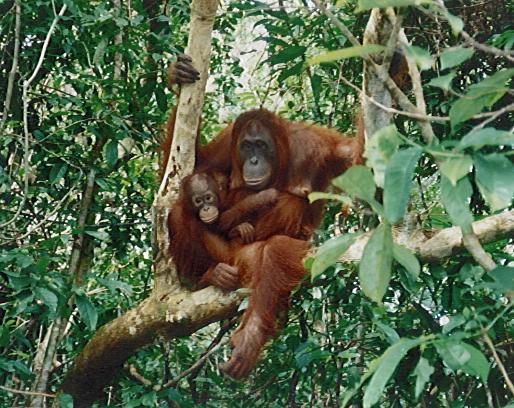 Due to their arboreal lifestyle, the rate and frequency of nursing has been difficult to ascertain, but it is believed an infant orangutan will receive milk from its mother until the age of around 5-7, with studies suggesting the age of complete weaning is later in Sumatra than it is in Borneo (van Noordwijk et al, 2009). An orangutan will begin begging for solid food from its mother after about a year, either taking the food directly from her hand or holding its hand to her mouth. Mothers are extraordinarily tolerant of this behavior, but this tolerance will decline as the infant matures, and usually completely evaporate after weaning (Galdikas, 1999, van Noordwijk et al, 2009).

Like other non-human great apes, orangutans in the wild construct night nests out of branches and leaves. Despite evidence that orangutans as young as three are able to construct their own nests, pre-weaning offspring will always share their mother's nest.

Female orangutans reach sexual maturity between the ages of 10 and 15, but will not have their first offspring until they are at least 15. Unlike chimpanzees, females do not have the conspicuous pink swelling that advertises ovulation, and will usually conceive after a consortship, usually lasting a few days, with the dominant male orangutan in the area, although rapes by non-dominant flanged and unflanged males do occur, and recent DNA testing in the Kinabatangan study area has shown that 40% of infants are sired by non-dominant males (Utami et al, 2009b). Female orangutans will usually give birth to no more than 3 or 4 offspring, and their life expectancy is around 45 in the wild.

After leaving their mothers, male orangutans enter a period that has been referred to as sub-adult wandering, dispersing and traveling over long distances, often associating with orangutans of both sexes of a similar age. Adult males in captivity reach sexual maturity at 8 to 10 years of age, although this will most likely happen at a slightly later age in the wild. Orangutans exhibit extreme sexual dimorphism and are also unusual in having two kinds of sexually mature males (Harrison & Chivers, 2006).

Upon sexual maturity, some male orangutans will develop into ‘flanged’ males. Flanged males are twice the size of adult females and are distinguishable by their throat sacs, wide cheek pads, and long coat. Flanged males are the dominant males in any area, and tend to migrate through large home ranges, monopolizing access to females and repelling other males with large, booming long calls. Un-flanged males, also often referred to as ‘sub-adult’ or ‘non-dominant’ male orangutans, are usually the same size as adult females, and lack the physical characteristics of flanged males. Subordinate to flanged males, they can often remain in this stage of arrested development for as much as 20 years, while remaining sexually mature and able to sire offspring, but will develop the characteristics of flanged males before they die (Utami et al, 2009; Harrison & Chivers, 2006; van Schaik & Delgado, 2000). The life expectancy of wild male orangutans is similar to females, at 45-50 years.

Harrison, M.E. & Chivers, D.J. (2006). The orangutan mating system and the unflanged male. A product of increased food stress during the late Miocene and Pliocene? Journal of Human Evolution, 52, pp. 275-293.