Long thought to be a solitary ape, long-term studies of orangutan behavioral ecology beginning in the 1960s and 1970s have shown that orangutans are best described as semi-solitary, with a social system just as complex as that of the more gregarious gorillas and chimpanzees.

The social organization of all primates is strongly influenced by the availability of food, and it has been argued that the current social and mating behavior of orangutans has evolved from one similar to that of modern-day gorillas, as climatic changes between 3-5 million years ago led to periods of irregular fruiting, forcing orangutans to range over larger areas to find enough food to sustain their large bulk, and necessitating a solitary lifestyle (Harrison & Chivers, 2006). 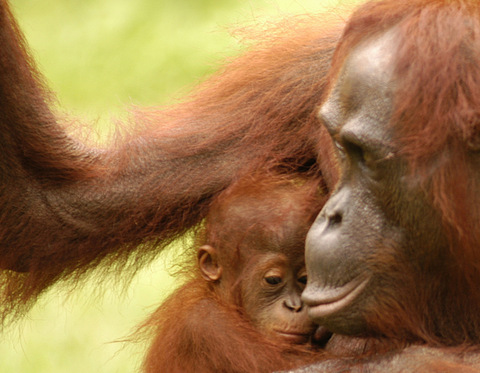 The most often observed relationship in orangutan society is between a mother and her offspring. As discussed above, orangutans have the longest birth interval of any primate and an extraordinarily long infant dependency. These pairings, known as "dyads," last from between 6-9 years, and begin to end at the point of weaning, with separation occurring after the birth of a new offspring. This dependency has been attributed, in part, to an infant orangutans need to learn complex fruiting patterns and processing techniques of often toxic rainforest foods, and may explain the low infant mortality rate of wild orangutans, which is estimated at 5-8% in the first year of life (van Noordwijk et al, 2009: Galdikas, 1999). Studies of weaning ages also suggest food plays a key part in the levels of tolerance shown by mothers to weaned offspring, with mothers showing tolerance when forest conditions are favorable, but showing marked intolerance as soon as the cost of association becomes too high for her and her dependent offspring (van Noordwijk et. al., 2009).

These ecological factors also seem to influence the sociality of adult females. Female orangutans practice philopatry, whereby daughters establish home ranges in the vicinity of their mothers, and home ranges overlap considerably (Galdikas, 1999). Although ‘clusters’ have been observed, where related females show preferential range overlap and association, and there are anecdotal observations of a mother intervening in the attack of an adult daughter at the Tuanan research site, female orangutans almost always avoid contact with other females, with research at Gunung Palung in West Borneo suggesting females actively avoid each other, a foraging strategy used mutually to reduce the likelihood of encountering food patches that are being, or have been, depleted by another orangutan. Although aggressive encounters do happen, they are rare, with just 29 such encounters during this 9-year study (Knott et. al., 2008).

Although sub-adult males will occasionally form traveling bands, and play between juveniles is common, adult male competition is hostile and has been cited as a major determining factor in orangutan social organization, caused by both ecological pressures and access to sexually active females. As discussed, there are two morphs of adult male orangutans, the ‘flanged’ and ‘unflanged’ male. 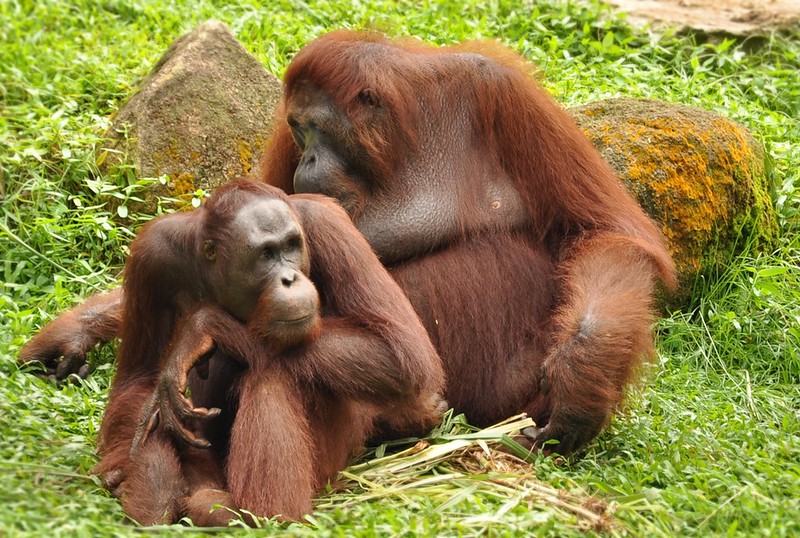 Although sizes are difficult to ascertain, home ranges of all adult male orangutans are believed to be at least three times as large as those of females. Like females, ranges overlap, and will usually contain one dominant flanged male, other non-dominant flanged males and any number of unflanged males (Utami et. al., 2009a). Despite these high range overlaps, encounters between flanged males are relatively rare, diverted by mutual avoidance, and any encounters are usually triggered by the presence of a sexually active female or coveted food source. At the Ketambe research center, 64% of aggressive encounters took place near a fig tree, and although only five cases of serious fighting were observed, when they do occur, they can result in serious injury or death (Utami et. al., 2009a).

Unflanged adult males generally show tolerance towards each other, and will often form associations, with play and homosexual encounters observed, although associations will decrease as they get older. Aggression rates are low amongst these males, but increase if one of the males is in consort with a female (Utami et. al., 2009a).

The reason for two different morphs of the male orangutan, each with different reproductive strategies, is one of the most fascinating aspects of orangutan behavior, but despite years of study, many questions remain unanswered.

The orangutan mating system is based on a mixture of female choice and male harassment and coercion. Scientists believe that this fierce competition for female mating opportunities has resulted in extreme sexual dimorphism and arrested development in orangutan societies.

Females mate promiscuously and have been observed at different research sites exhibiting preferences for both flanged and unflanged males (Setia et. al., 2009). Generally, though, females demonstrate preferences towards the dominant flanged male in their home range, and will actively seek out this male, who will advertise his location by giving long calls. Consortships and matings between females and dominant flanged males are generally cooperative, and dominant flanged males will sire the majority of offspring. In comparison, matings between females and unflanged males are generally forced and usually only come about after the unflanged male has actively traveled through an area to locate the potentially sexually active female. Although female preference and mate choice is an important factor in orangutan mating systems, it has meant males have had to develop two contrasting strategies: call-and-wait and sneak-and-rape (Harrison & Chivers, 2006; Galdikas, 1999).

The evolution of large-bodied flanged males is relatively easy to understand. Similar to gorilla societies, where male silverbacks fight for access to females and defend family groups, size has its benefits, and millions of years of mating with dominant flanged males explain the extreme dimorphism seen between orangutan males and females. But why, if size means everything, don’t all male orangutans develop cheek pads and fight for access to females in the same way? Several hypotheses have been put forward. One, developed recently after paternity testing revealed unflanged males have a higher success of siring offspring than do non-dominant flanged males, suggests unflanged males, as a result of their decreased body size and increased speed and agility, have a greater chance of sneaking forced copulations with sexually active females than do slow-moving non-dominant flanged males, so arresting development and delaying the onset of flanged sexual characteristics is advantageous in the long run (Utami et. al., 2009b).

Harrison, M.E. & Chivers, D.J. (2006). The orangutan mating system and the unflanged male. A product of increased food stress during the late Miocene and Pliocene? Journal of Human Evolution, 52, pp. 275-293.