- Indonesia plans to stop building new coal-fired plants after 2023, with additional electrical capacity to be generated only from new and renewable sources.

- Development experts and the private sector have welcomed the plan, but some say it’s not ambitious enough since it still entails construction of new coal plants that have already been signed.

- Once these plants are built, they will operate for decades to come, and their emissions will spell disaster for climate change.

- There’s also controversy over what the government considers “new and renewable” energy, in which it lumps solar and wind alongside biomass, nuclear, and gasified coal.

JAKARTA — Indonesia says it will stop building new coal-fired power plants after 2023 to meet its carbon-neutral goals — but the more than 100 plants to be built by then will still be churning out CO2 decades after that.

Zulkifli Zaini, CEO of state-owned electricity utility PLN, said there would be no more new thermal plants after an ongoing program to add 35,000 megawatts (MW) to the national grid — powered mostly by coal — is completed.

That program, rolled out in 2015, calls for building 117 new coal-fired power plants, with only 2,000 MW coming from renewable energy sources.

Zulkifli said construction of the new coal plants is expected to be finished by 2023.

“After these [programs] are done, we are committed to add electricity in the future by focusing only on new and renewable energy,” Zulkifli said.

Indonesia’s renewables sector trails far behind its neighbors in Southeast Asia — despite encompassing commonly accepted “renewable” sources such as solar, geothermal and hydro, as well as more controversial “new” sources such as biomass, palm oil-based biofuel, gasified coal, and, theoretically, nuclear. As of 2020, these new and renewable energy sources only made up 11.5% of the country’s power grid. The government expects to generate 23% of the country’s energy from new and renewable sources by 2025.

Coal, of which Indonesia has abundant reserves, makes up almost 40% of the country’s energy mix.

“According to our study, Indonesia could achieve net-zero emissions in 2050 if emissions from power plants are reduced as fast as possible,” he told Mongabay. “So the first key is to completely stop building new coal plants at least after 2025. But if possible, before 2025 is better.” 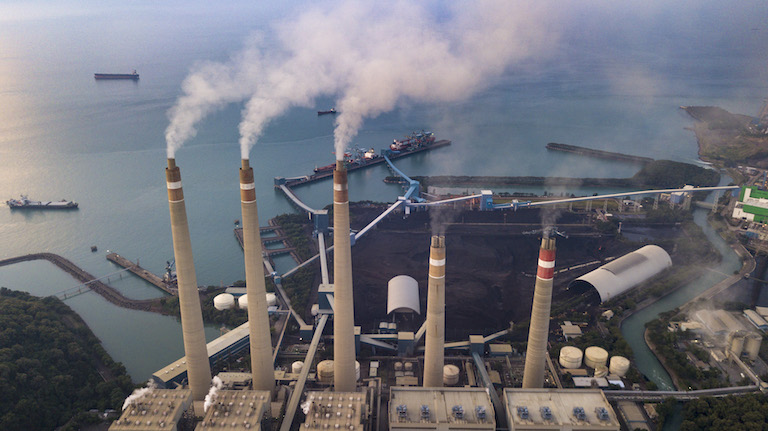 Fabby said that for the transition from fossil fuels to renewable energy to go smoothly, the private sector needs to be involved in developing renewables.

“With the current situation, where the rest of the world is moving toward decarbonizing the economy, the private sector in Indonesia needs to transform,” he said. “In the past, the government’s programs emphasized on building coal plants, but now it’s different. And thus, companies need to pivot to building renewable power plants.”

Fabby said some prominent players in the coal industry, like Medco and Adaro, are already looking to develop renewable energy sources in the future.

“So we’re already moving [away from coal],” he said. “But that’s how it’s supposed to be. If companies don’t transform, their own businesses will die.”

Fabby said companies need to realize there’s no future in fossil fuels, with a growing number of financial institutions announcing they will withdraw funding for coal projects under mounting pressure from consumers and shareholders demanding action on climate change.

South Korea, which had robustly funded overseas coal-fired power plants, including in Indonesia, between 2009 and 2020, recently announced it would end all new financing for overseas coal projects.

“Everyone sees that coal plants have no future, so why bother funding coal projects?” Fabby said. “Because if they fund new coal plants, there’s a potential for them to become stranded assets.”

This is because the cost of running coal plants will be higher than renewables in the near future in Indonesia, he added.

“After 2027, solar power plants, including their storage, and wind power plants will generate cheaper electricity compared to coal plants,” Fabby said. “So if PLN keeps building new coal plants without pause, the potential for those plants to become stranded assets is huge.”

The Indonesian independent power producer association, APLSI, welcomed PLN’s plan, saying it’s about time the country transitions from fossil fuels to renewable energy just like the rest of the world.

APLSI chairman Arthur Simatupang said the private sector was ready to take part in the transition.

Arthur, who is also CEO of coal mining companies PT Toba Bara Energi and PT Indomining, said the plan to stop building new coal plants should be seen as an opportunity for the private sector to invest in renewables.

“The opportunity is very positive, we really want to contribute more and to work together with the government,” he said.

Fabby said that without the involvement of the private sector, it will be very difficult to develop the renewables sector in Indonesia.

“We need to build 14,000 MW [of renewables] by 2025,” he said. “If PLN has to build all that by itself, it won’t have the financial capacity to do so. Many new plants will need to be built, with up to $25 billion of investment needed per year to develop renewables and modernize our power grid.” 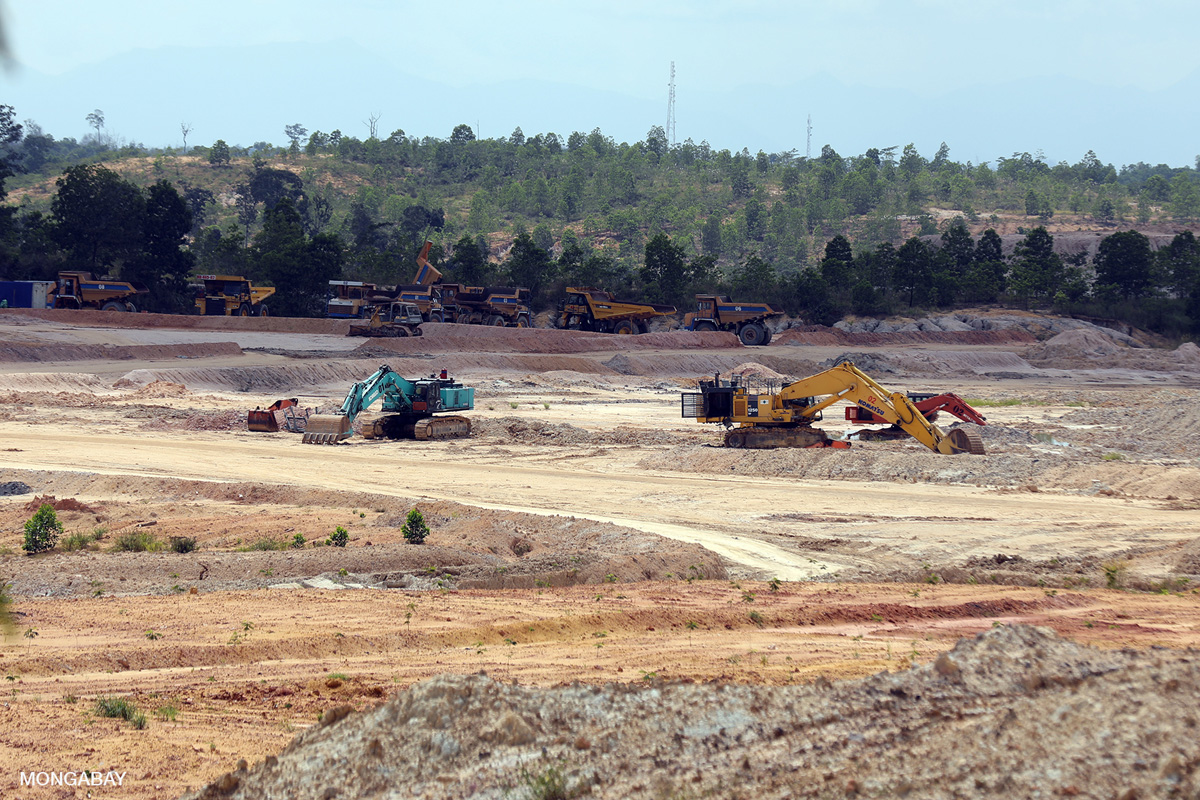 While imposing a deadline on the construction of new coal plants is an important first step, it isn’t enough for Indonesia to transition away from fossil fuels, according to Tata Mustasya, climate and energy campaign coordinator at Greenpeace Indonesia.

He questioned the decision to allow the plants in the pipeline for the 35,000 MW and 7,000 MW programs to proceed. Combined, the two programs need another 27,000 MW of generating capacity to reach completion — all of it fueled by coal, Tata said.

And once these coal plants are built, they will operate for decades to come, which will lock Indonesia into a carbon-intensive economy well beyond the 2023 deadline, he said.

“Under the best-case scenario, Indonesia needs to stop building new coal plants from now without waiting to complete the 35,000 MW program and the [7,000 MW] program in order to meet the target of limiting global warming to 1.5° Celsius in 2050,” Tata said.

He said it would be even harder for renewables to compete with coal if the 35,000 MW program is completed.

“This will eliminate the space for renewable energy in Indonesia, especially on the island of Java, which has the highest demand for electricity,” Tata said.

Fabby said there’s still an opportunity for the government to curtail the 35,000 MW program and make up the difference with renewable capacity.

But coal executive Arthur said the proposed coal plants that had been tendered out under the program must be built because coal still plays an important role in powering the country’s industries and households. He also said renewables like wind and solar are still not reliable enough to produce energy around the clock, a problem known in the industry as intermittency.

“[Coal] is needed as the backbone [of the grid],” Arthur said. “If the electricity system is not reliable, then blackouts will still happen often.”

He also said the large-scale battery storage technology needed to make wind and solar more reliable remains prohibitively expensive. That renders any rapid and large-scale transition from coal to renewables out of reach for now, Arthur said.

“In general, our member companies have already had master plans to transform [from coal to renewables], but the problem is that it can’t be done on a large scale immediately,” he said. “Renewables need batteries. Do they exist yet?”

They do, as other countries have shown, and the problem of intermittency becomes less of a factor the more renewable capacity is built, experts point out.

Also, a 2018 study has shown the price of solar has dropped so much that one could overbuild the system to provide enough energy, even on cloudy days. And since renewable fuel is free, unlike coal or natural gas, overproduction is not a problem. 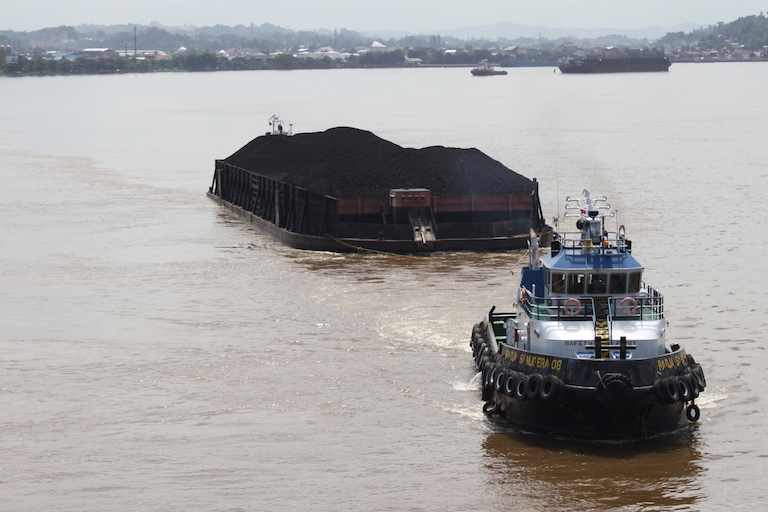 Coal barge on the main channel of the Mahakam river, which are now travelling within river dolphin habitat and into narrow tributaries where they affect dolphin migration and feeding patterns. Image by IndoMet in the Heart of Borneo via Wikimedia Commons (CC BY 2.0)

Experts have also called for old coal plants, which they say are highly polluting and costly to operate, to be retired early.

“If we want to be compatible [with our climate target], we need to start phasing out coal from 2029, the sooner the better,” Fabby said. “We have identified aging power plants that could be phased out before 2030, which have been operating for more than 30 years.”

However, the government has so far not announced any plans to phase out old coal plants.

Arthur of APLSI agreed, saying the older plants are less efficient. But he said a complete phaseout of all coal plants is only possible 20 to 30 years from now. Even then, the government would need to set regulations in place supporting the phaseout of coal and the development of renewables, Arthur said.

“If all [regulations] are in line, the private sector doesn’t mind at all if old coal plants are being shut down,” he said. “I think that’s where we’re heading. For example, we have old cars from the 1980s with inefficient engines. Current cars are more efficient.” 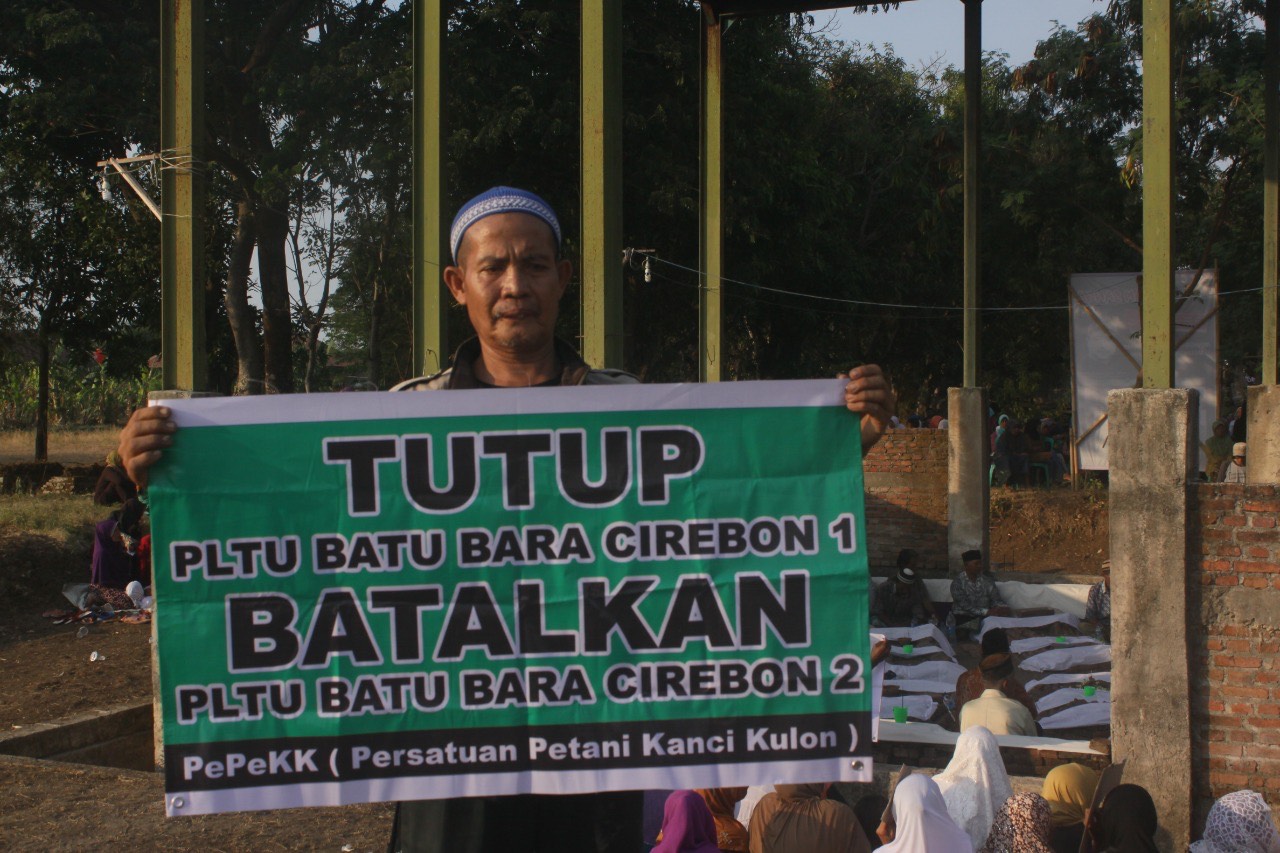 Protesters against the construction of Cirebon 2 coal plant. Image courtesy of the Indonesisan Forum for the Environment (Walhi).

Arthur said current regulations are also not conducive for the development of renewables, but future regulations, including a bill currently being deliberated in parliament, should address these problems.

“If the regulations are in place, it’s easier for us to invest [in renewables],” he said.

Besides that, simplifying the licensing process for renewable projects is also critical, Arthur added.

Fabby said the biggest challenge would be in enshrining PLN’s commitment to stop building new coal plants into a binding policy.

“If the commitment remains verbal, it can still be annulled or changed by other government agencies, like the Ministry of Energy and Mineral Resources,” he said. “So it’s better if the statement is formally written in PLN’s electricity procurement plan, or RUPTL. The document should reflect the commitment. We want to see no more new coal plants in the RUPTL. If the document doesn’t reflect that, then it’s just empty words.”

Article posted by Hans Nicholas Jong on 12 May, 2021 on Mongabay: